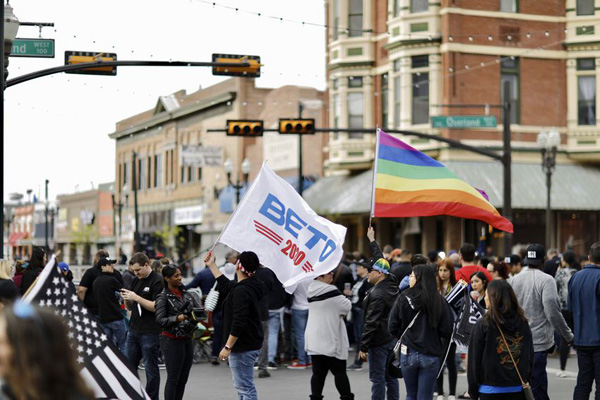 Presidential candidate Beto O'Rourke's supporters, including one holding a LGBTQ Pride flag, gather ahead of a rally in El Paso in March. (Photo: Ivan Pierre Aguirre for The Texas Tribune)

“We must ensure all Americans are treated equally no matter who they are or who they love,” the Democratic presidential candidate says in offering his sixth major policy proposal.

The plan — O’Rourke’s sixth major policy rollout — is heavy on executive actions he would pursue to support the LGBTQ community. It also prescribes legislation he would champion and steps that can be taken on the global stage.

“We must ensure all Americans are treated equally no matter who they are or who they love,” the former El Paso congressman said in a statement on the proposal, which comes amid LGBTQ Pride Month and arrived hours before he was set to lead a “Pride Run” in New York City.

Among the executive actions that O’Rourke would take: overturning Trump’s ban on transgender people serving in the military, reversing the “deploy or get out” policy that critics say discriminates against HIV-positive service members, and bringing back U.S. Education Department guidance that sought to protect LGBTQ students. O’Rourke would also act to crack down on conversion therapy, update blood donation requirements for LGBTQ people, increase LGBTQ representation in the census and install more pro-LGBTQ people in government, especially in the judiciary.

When it comes to legislation, O’Rourke backs measures such as the Equality Act, a sweeping bill passed last month by the Democratic-led House that would overhaul the Civil Rights Act to protect LGBTQ Americans. O’Rourke also wants to make sure LGBTQ people have equal access to health care and insurance as part of any universal health care system that his administration would pursue in Congress.

And on the international front, O’Rourke proposes things like collaborating with allies to craft a global treaty through the International Law Commission of the United Nations that would shield LGBTQ people from persecution. O’Rourke also would create a “special envoy for the human rights of LGBTQ+ people” in the U.S. State Department.

Looking to stand out as his poll numbers remain low, O’Rourke has been producing policy papers at a steady rate. He previously released proposals on climate change, abortion rights, criminal justice, voting rights and immigration.

Immigration continues to be a focus in O’Rourke’s latest plan. His proposed executive actions include clarifying that LGBTQ people fleeing persecution are a “vulnerable population” that can use the U.S. asylum process.

Pride Month is in full swing in San Antonio and the LGBTQ community and its allies are marking the most...