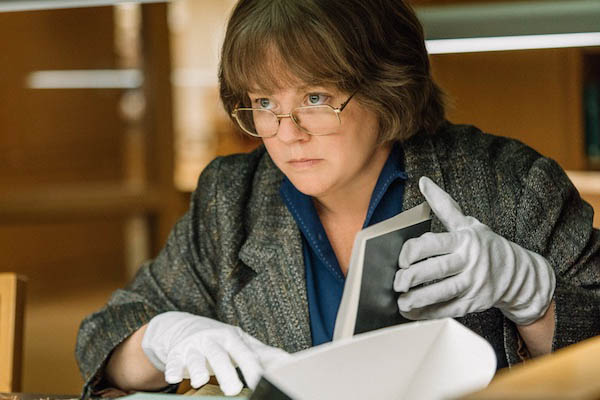 When she’s not trying to act like the female version of Kevin James by using physical comedy as a crutch, actress Melissa McCarthy has made some satisfying inroads as a comedian in flicks like 2015’s Spy and her Academy Award-nominated turn in 2011’s Bridesmaids. This year, unfortunately, she struck out big with The Happytime Murders and Life of the Party, so it’s a welcomed career move to see McCarthy change things up a bit in the film Can You Ever Forgive Me?, her most dramatic role to date — and her most remarkable.

The character is well-matched to McCarthy’s self-deprecating wit and ability to make the flaws and vulnerabilities she brings to the role seem sympathetic, spirited and funny. In Forgive Me?, McCarthy plays late New York Times-bestselling author Lee Israel, known early in her career in the 1960s and ’70s as a magazine writer and celebrity biographer. Years later, Lee finds herself on the skids — living a lonely, drunken life with her cat, struggling to pay bills and getting the cold shoulder from her literary agent Marjorie (Jane Curtin), who thinks she’s past her prime.

Lee’s opportunity to resolve her problems, however, comes to her unintentionally when she discovers her talent for forgery. Utilizing her writing ability, she begins to pen fake, personal letters by deceased writers and actors (including their counterfeit signatures) and sells the correspondences to collectors and book stores around the New York City area. Later, she recruits a drinking buddy, Jack Hock (Richard E. Grant), to help her operate the small, illegal enterprise inside her apartment.

Directed by Marielle Heller (The Diary of a Teenage Girl) and adapted from Lee’s own 2008 memoir by screenwriters Nicole Holofcener (Enough Said) and playwright Jeff Whitty, Forgive Me? uses a cynical and clever combination of dark comedy and drama that builds on the narrative’s stranger-than-fiction premise with a pitch-perfect tone.

As misanthropic partners in crime, Lee and Jack are incredible together as they create a peculiar platonic relationship with one another (both are gay) on a foundation of cheap Scotch, criminal activity and a sarcastic sense of humor. If there is a cinematic god, both McCarthy and Grant should earn Oscar nominations for their memorable performances, as should Holofcener and Whitty for their smart script.

Whether that occurs, Forgive Me? — as entertaining as she was in Bridesmaids or playing former White House Press Secretary Sean Spicer on Saturday Night Live — is the type of work McCarthy will hopefully search out as she expands her range. In Forgive Me?, she proves that it’s easy to shed the goofball brand if you have the talent — and the desire.

“Can You Ever Forgive Me?” is playing at the Alamo Drafthouse Cinema – Park North and Santikos Bijou Cinema Bistro.

U.S. Rep. Will Hurd, R-Helotes, is looking to hold on to the 23rd District. His opponent is Gina Ortiz Jones,...