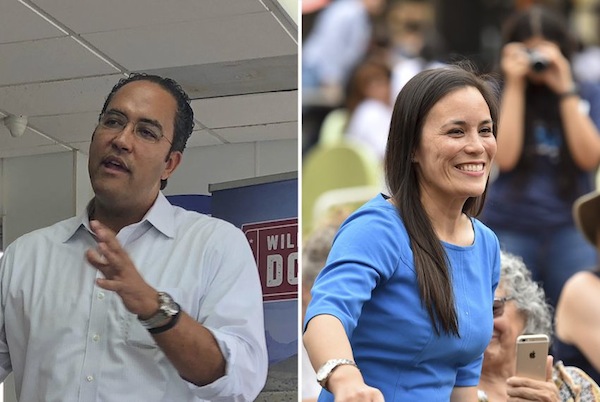 Left: U.S. Rep. Will Hurd, R-Helotes, speaks at a town hall in Alpine on Sept. 16, 2018. He stopped in the city as part of his annual end-of-summer swing through the district. Right: Gina Ortiz Jones, the Democratic nominee challenging Hurd, smiles as she is introduced during a Women at the Top Rally in San Antonio on Sept. 23, 2018. (Photos: Patrick Svitek: Hurd. Robin Jerstad: Ortiz Jones.)

U.S. Rep. Will Hurd, R-Helotes, is looking to hold on to the 23rd District. His opponent is Gina Ortiz Jones, a former Air Force intelligence officer who is openly LGBTQ.

By Teo Armus, The Texas Tribune

The Texas congressional race between incumbent Republican Will Hurd and Democratic challenger Gina Ortiz Jones is still too close to call following a dramatic overnight in which Ortiz Jones pulled ahead, Hurd pulled back on top, and news outlets across the nation retracted their projections.

On Wednesday morning in Congressional District 23, the state’s only consistent battleground district, Hurd was leading Ortiz Jones by 689 votes, with all precincts counted.

“This election is not over—every vote matters,” said Noelle Rosellini, a spokesperson for Ortiz Jones. “We won’t stop working until every provisional ballot, absentee ballot, and military or overseas ballot has been counted.”

She did not mention the possibility of a recount, although Ortiz Jones’ campaign is well within the margin to do so in Texas. (According to state law, the difference in votes between the top two finishers must be less than 10 percent of the winner’s total votes — in this case, about 10,000.)

But that did not keep Hurd from declaring victory. “I’m proud to have won another tough reelection in the 23rd Congressional District of Texas,” he said in a statement on Wednesday morning, noting that he would be the only Texas Republican to keep his seat in a district carried by Hillary Clinton in 2016.

Hurd, a two-term lawmaker and former CIA officer, attempted to distance himself from President Donald Trump on issues such as Russian interference in the 2016 election and immigration — a key issue in this district, which covers hundreds of miles of the Texas-Mexico border. One of just a few Black Republicans in Congress, he won reelection in 2016 by a razor-thin margin of about 3,000 votes.

Ortiz Jones, a former Air Force intelligence officer and Iraq War veteran, has tried to point out that most of Hurd’s votes have fallen in line with Trump while emphasizing her experience in the military. If elected, she would be the first Filipina-American member of Congress and the first openly LGBTQ lawmaker in Congress from Texas.

Her campaign would have to pay up to request a recount. According to state law, she would have to submit a request in writing to the governor’s office and pay $60 for each precinct in the congressional district that uses regular paper ballots, plus $100 for each precinct that uses electronic voting systems. The money would be returned only if a new winner is declared.

Sam Taylor, a spokesperson for the Texas secretary of state’s office, said that more than half of the precincts in the district use electronic ballots.

Many news outlets, including The Texas Tribune, called the race for Hurd late on Tuesday evening, with Hurd declaring victory on Twitter and in person to his supporters at a watch party in San Antonio as Ortiz Jones conceded defeat across town.

“While it didn’t shake out the way we would want, we ran a campaign that we are proud of and that really reflected Texas values,” Ortiz Jones said at her campaign headquarters, according to the San Antonio News-Express. Her campaign did not immediately respond to requests for comment.

But as more vote totals kept coming in, she surpassed Hurd by a margin of fewer than 300 votes with all precincts reporting. Early on Wednesday morning, news organizations withdrew their call of the race and Hurd deleted a tweet saying he won.

But vote totals from the last of eight Medina County precincts were inputted incorrectly — they had left out about 4000 votes when first entering totals. The fixed results put Hurd just over Ortiz Jones by a margin of fewer than 700 votes.

In an election season that offered a mixed bag of results, at least one San Antonio LGBT candidate is celebrating...