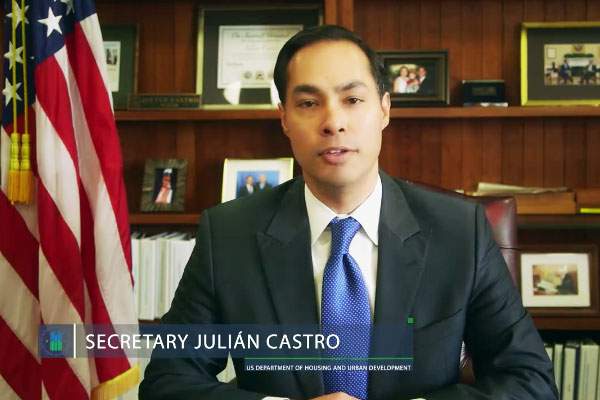 On April 27, Secretary of Housing and Urban Development Julian Castro announced #40toNoneDay as a reminder that 40 percent of all homeless youth identify as LGBT. (Video capture via HUD)

In his announcement, which was delivered via a video on Facebook, Castro says, “In January of 2015 more than 46,000 youth were estimated to be homeless on any given night. Up to 40 percent of these young people identify as lesbian, gay, bisexual or transgender. That why the Department of Housing and Urban Development is partnering with the True Colors Fund to give LGBT Americans a safe space to be their true selves.”

In order to highlight the partnership, Castro proclaimed April 27 as “#40toNoneDay,” to raise public awareness about LGBT youth homelessness and to provide supporters with simple ways to make a difference.

The True Colors Fund is spreading the word about #40toNoneDay by encouraging supporters to post “unselfie” signs on social media.

In 2014 HUD and True Colors launched the LGBTQ Youth Homelessness Prevention Initiative with two objectives: to facilitate better local collaboration between stakeholders working with youth and developing strategies for preventing homelessness among LGBT youth. The initiative was rolled out in two test cities, Cincinnati, Ohio and Houston, Texas.

In Houston, a program called NEST is being implemented by the Montrose Center and the Coalition for the Homeless Houston/Harris County in collaboration with more than 60 Houston/ Harris County youth agencies and service providers.

Since assuming the post of HUD secretary, Castro has supported initiatives which promote the LGBT community’s right to fair housing opportunities.

At the top the HUD LGBT web page a quote from Castro says, “HUD is committed to fighting unjust discrimination and to expanding housing opportunity for all. We believe there are no second-class citizens. And I will do every single thing that I can to make sure that everyone is protected.”

Hosted by the Tennis Club of San Antonio (TCSA) and benefiting Spay-Neuter Assistance Program (SNAP) and Thrive Youth Center, the...