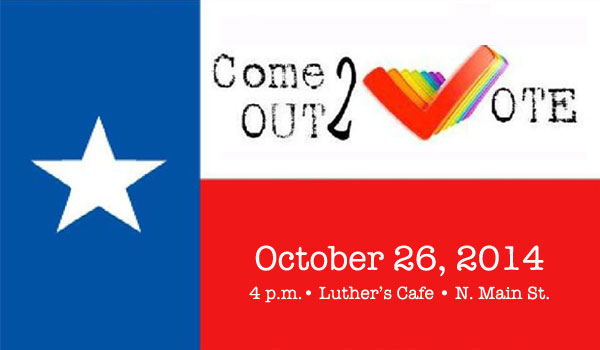 CAUSA is hosting a rally and walk to the polls on October 26 at Luther's Cafe parking lot.

In a push to emphasize the importance of the LGBT community’s vote in the November 4 election, organizers at CAUSA (Community Alliance for a United San Antonio) are planning a rally and walk to the polls to vote early on October 26.

In their Facebook announcement, CAUSA’s event-planners write, “The 2014 mid-term elections are a pivotal moment in the history of the Texas LGBTQ community and their allies. On issues such as same-gender marriage, non-discrimination, reparative therapy, voter ID laws, same-gender adoption, women’s health, minority/immigration rights and reform, etc., etc. the stakes are too high for registered voters, particularly registered LGBTQ voters, to sit at home and not vote this election season.”

Early voting in now underway in San Antonio until the end of the month. Organizers hope to bring LGBT voters to the Main Avenue Strip for an afternoon of entertainment and civic duty.

Plans are to have a DJ, performances by drag artists Natalie Da-Sayo Cutrone and Armani D. Andrews and a guest appearance by the Sisters of Perpetual Indulgence. Michelle Jackson a volunteer for Deaf Interpreter Services, Inc. will provide ASL interpretation for the event. Co-emcee is Autumn Summers.

CAUSA co-chair Joseph Tanasi says there will be more announcements later regarding additional performers and a featured speaker.

At 5 p.m., those at the rally will be encouraged to walk together to the early voting site located at San Antonio College’s EcoCentro building at 1802 N. Main, about three blocks north of Luther’s Cafe. The polling location is open until 6 p.m.

The CAUSA invitation says it all: “We’ll be inspired by music, performance, and speech followed by a short historical solidarity walk together as friends, family, and community to an early voting site where we will cast our early votes and serve as visual motivation to our fellow registered voters to COME OUT 2 VOTE!”

Check out the rally’s Facebook event page to keep up with continued updates.

Recalling the expulsion of Dignity from weekly Mass at St. Ann’s

An October 21 article by Abe Levy in the San Antonio Express-News recalls the expulsion four years ago of Dignity...