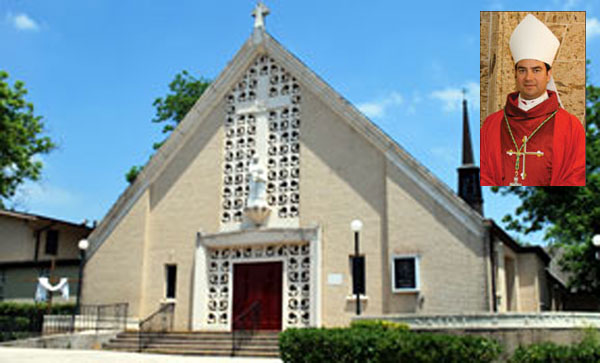 An October 21 article by Abe Levy in the San Antonio Express-News recalls the expulsion four years ago of Dignity San Antonio from St. Ann’s parish where it had celebrated Sunday Mass for 15 years.

The article, which seeks to gauge the response of local Catholics to the synod of clergy who convened in Rome last week, points out that, “the years of quiet tolerance that the archdiocese had shown the group seems to fit the Vatican’s new tone of inclusiveness, a major shift driven by Pope Francis and glimpsed in the initial language used by bishops gathered in Rome last week.”

In a letter dated October 13, 2010, then-Auxiliary Bishop Oscar Cantu ordered St. Ann’s Catholic Church to stop hosting a weekly Mass for the local chapter of Dignity, a group comprised of lesbian, gay, bisexual and transgender Catholics and their families.

Fred Anthony Garza, the president of Dignity San Antonio at the time, told QSanAntonio, “Our community was shocked to arrive for Mass and discover this was the last time we could meet at the parish that has been our home for more than 15 years.”

“It’s like being kicked out of our home,” Garza said. “We are all very sad. It’s especially sad for the members of our community who have children, who could not find Catholic parishes who would baptize or provide First Communion for them. Those children have grown up in our community, and can’t understand why their family cannot go to Mass here anymore.”

Dignity San Antonio was one of the last chapters in the country still allowed to worship in a Catholic Church. Their expulsion from St. Ann’s coordinated almost to the day with the arrival of Archbishop of San Antonio Gustavo Garcia-Siller, who’s installation was held on November 23 of that year.

According to the Express-News, “The Defenders of the Magisterium, a volunteer group that monitors Catholic activities for violations of doctrine or liturgy, reported to local and national Catholic leaders that the Dignity Mass included references to God as a woman and kissing by same-sex couples.”

“The Mass at St. Anne’s Church for members of the homosexual advocacy group, Dignity, continues to send conflicting messages about the Church’s official teaching concerning the proper celebration of the Eucharist and living an active homosexual lifestyle,” Cantu wrote in his letter to St. Ann’s pastor, Father John Restrepo.

In his letter, Cantu condemned any prejudice or hate against LGBT people and suggested that Dignity members go to Mass with the “wider Catholic community, at Masses already established, so as to experience and be integrated into the life of the Catholic Church incarnate in the local parishes.”

“Bishop Cantu no doubt believes that he is upholding Church teaching with this action,” said Marianne Duddy-Burke, DignityUSA’s executive director at the time. “But the Catholic Church has long taught that the bishops are not the only source of theological truth. That truth also comes from the people in the pews. The people of Dignity San Antonio know in their hearts that they are living their lives in a way that honors the teachings of Jesus.”

In responding to the results of last week’s synod, Garcia-Siller told the Express-News, “I think there are positive things that we need to relate to one another with more respect and with more sensitivity. But I don’t think, so far, there is any indication of a change of doctrine. It’s more the pastoral approach. … In the past, for whatever reason, it has not been attended to well.”

In 2013, Cantu went on to become bishop of the Diocese of Las Cruces, New Mexico.