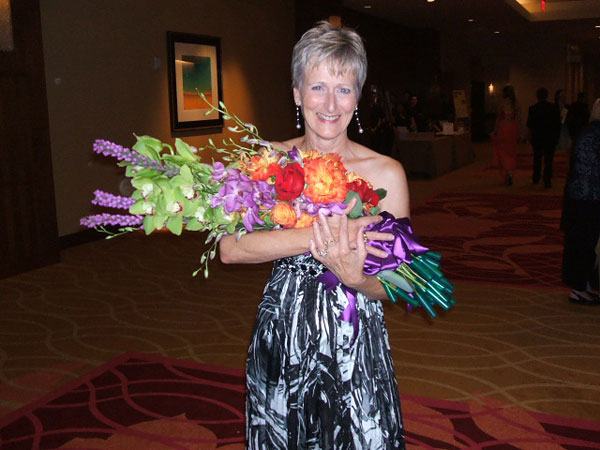 Gayl Newton, organizer for Ladies on the Loose, which celebrated its 10th anniversary in April. (Photos: Sam Sanchez)

Many in the community may recall back to 2006 when the San Antonio chapter of the Human Rights Campaign began hosting a monthly cocktail party for lesbians dubbed Ladies on the Loose, LOL for short. A decade later, those monthly gatherings continue and are a mainstay in the social life of the lesbian community, sometimes attracting more than 200 attendees.

LOL was the brainchild of of HRC member Kathy Kennedy who recruited Gayl Newton and Kris Beidenharn to help her plan the monthly parties. The event was an instant hit and the mailing list for invitations quickly grew to over 1000 names. After about three years, Newton took over organizing the event when the HRC steering committee agreed to make LOL independent from HRC in order to allow other LGBT organizations to promote their fundraisers and causes at the monthly party.

Not long after she started planning the LOL gatherings, Newton initiated a web site, Newton’s News, that lists events San Antonio and Austin. On the site, Newton writes a monthly column where she muses about local happenings, special holidays and current events.

Newton was honored in 2010 by HRC with the Equality Award for her volunteer work with the organization and for her efforts with LOL. (Top photo.) She also wrote for Ignite Magazine from 2009 to 2010 and served as the women’s editor of the publication in 2010. Partygoes at the LOL party in August 2011 at Aldaco’s in Sunset Station. LOL is celebrated its 10th anniversary in April.

On April 21, Newton and her ladies celebrated LOL’s tenth anniversary at Paesanos 1604 with an evening of cocktails and dancing. At the next event on May 19, the ladies will enjoy a happy hour party at Tycoon Flats on North St. Mary’s Street.

LOL parties are on every third Thursday. Newton picks a new location every month giving party goers a peek at some of the most popular restaurants and bars in San Antonio. She told Out In SA she only selects LGBT-owned or LGBT-friendly establishments.

Despite the Ladies on the Loose moniker, Newton’s parties now attract people from throughout the LGBT community.

“Our updated mission is to provide timely information about events, happenings, fundraisers, and activities in the LGBT communities in South Texas,” Newton writes on her website. “By doing so, we are connecting and supporting our LGBT communities.”

This Week’s Biggest Asshats in the ‘Bathroom’ Debate

As the debate over which public bathroom transgender people should be allowed to use continues, one thing has become increasingly...