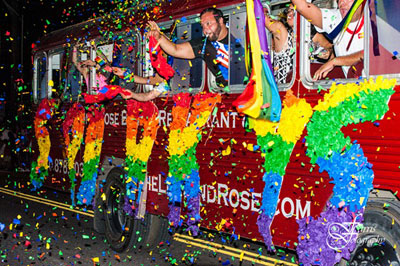 When the Pride San Antonio Festival opens its gates on July 2, it will mark the 13th anniversary of the observance, which its organizers have dubbed, “Pride Bigger Than Texas.”

In the first few years, Pride SA was a modest affair that relied on the support of four local bars and featured a 15-minute parade with about a dozen entries. Over the years, the event has grown into a large festival occupying the west end of Crockett Park and a 90-minute parade boasting 70-plus entries.

For the first time, last year, the festival included same-sex weddings performed by Judge Ron Rangel and Rev. Audrie Henry of Texas Wedding Ministers. Twenty lesbian and gay couples, and one straight couple, got married in front of 7,000 attendees.

Among the couples who tied the knot were Poindexter and his partner of 25 years, Phillip Barcena, board president of Pride SA. “In the words of our forefathers, we’re all endowed with unalienable rights of life, liberty and the pursuit of happiness, and this was our celebration of that,” Barcena told the San Antonio Express-News at the time.

Following a theme of “Peace, Love, Pride,” this year’s festival will also feature a group wedding, along with live entertainment, food, drinks and information booths. The annual parade, which steps off at 9 p.m., includes floats, marching units and local dignitaries riding in open convertibles.

This year’s Pride SA beneficiaries are BEAT AIDS, Fiesta Youth, the Gay and Lesbian Association of San Antonio College and SNAP, a nonprofit which provides free veterinary services to the pets of people affected by HIV-AIDS.

While the festival and parade are Pride SA’s primary fundraising effort, the organization sponsors a variety of events throughout
the year, including the Night In Old San Antonio Pride Ride, tournaments (darts, bowling and volleyball) and the costumed RainBOO Run in October.

Gene: Ken, here you are at last. On the couch where you belong. Now, I want you to just lie...