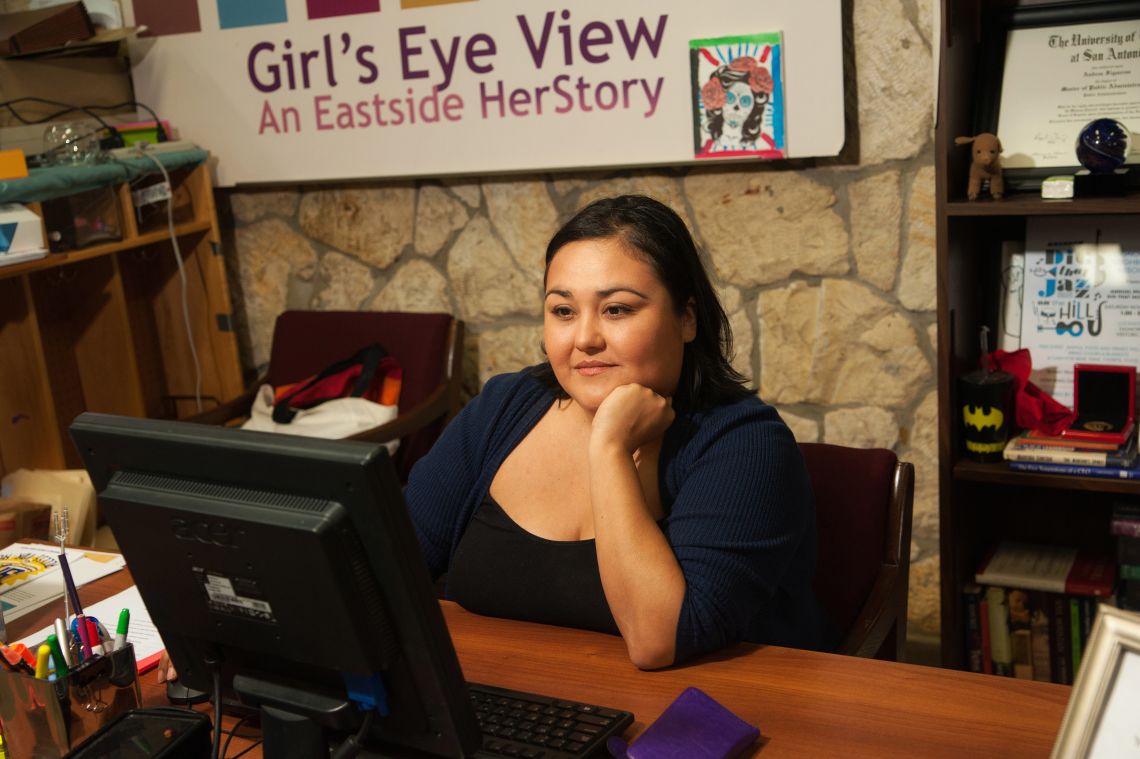 A lot of people take time off between high school and college. Most don’t end up playing in a band in L.A, but that was the start of Andrea Figueroa’s path to becoming the executive director of the Martinez Street Women’s Center (MSWC). Not-for-profit work was not part of her original life plan, but now she can’t imagine being anywhere else.

When Figueroa returned to San Antonio and started college, all of her life experiences caused her to gravitate toward Mexican American studies and women’s literature.

The great irony is that these are two majors that tend to fall in the category of “useless” in a capitalist society. They aren’t about real-life careers, the way architecture and engineering are. It’s all theory, historical perspective, and intersectionality rather than needed life skills for making your way in the world. But that’s exactly what hooked Figueroa. These areas of study opened her eyes to the world around her and helped her realize that “community activist” is also a real-life career — the type of career that has the potential to change the world. The question became how to go about such world-changing. Urban planning made sense, and Figueroa went on to earn a master’s degree in public administration. But a friend took her to a nonprofit organization meeting and she realized she had found her path. And thank goodness for friends who know us better than we know ourselves. During grad school, another friend encouraged her to apply for a summer position at MSWC. She got the job and has been there ever since.

Being an out-and-proud Chicana queer lesbian is key to her work at MSWC. Coming out can be a scary proposition in any circumstance, but MSWC was a safe space for her to both claim her identity and use it to promote the care of others. Figueroa states that even more than being accepted, she is loved at MSWC — for everything that she is.

Figueroa notes her privilege as a cisgender fem woman, in the same breath as expressing her pride for being the executive director of an organization as an out woman of color. The latter is still a rarity, and the former is a reminder of how much work we have left to do. Both allow her to hold space for showing the youth served by MSWC that they are welcomed and supported for everything they are.

And MSWC is not just a welcoming, safe space — it’s a program with a mission of pragmatic transformation. The Martinez Street Women’s Center endeavors to change the lives of women and girls in our community through access to preventative health services, education, and advocacy. Their vision is of a world where women and girls achieve empowerment, equity, and justice. They currently run two main programs: In addition, MSWC partners with many other community organizations to promote initiatives that are vital to the wellness of individuals who live in San Antonio and surrounding areas. They can be seen joining forces on murals, marches, forums, workshops, and leadership opportunities on a local level while working nationally with the Media Action Grassroots Network. Robert Salcido Jr., a regional field coordinator at Equality Texas and the board chair of The Center (Pride Center San Antonio) sees Figueroa as integral to the work being done within the San Antonio community, stating: “Andrea has been a community partner in various roles for many years. I find her work to be filled with passion and dedication. It’s always a pleasure working alongside Andrea, not only because of her leadership skills but also her love of advancing our communities.”

But Figueroa is only getting started. She is currently planning and strategizing for the future. She wants to expand MSWC’s services to other areas of town and start organizing parents. She recently applied for a grant that would fund her work in those areas and hopes receiving it will inform a unified vision and plan for the next few years.

These are things that might seem easily doable, even a year ago. But in today’s political climate, such work can feel overwhelming. When I asked Figueroa about this, her response was exactly what I would hope for from a positive but still pragmatic community leader.

“I would say that things have changed in the recent political climate,” she said. “I know it’s been difficult for all of us. Overall, now I feel it’s more important than ever for us to stand up for and with our communities. We have to decide what type of future we want together, and move toward that … It’s also important for us at [MSWC] to allow our staff that space and time to work on the issues they care about, whether it’s registering people to vote, going to Standing Rock, or going to the Capitol in Austin to protest the litany of bad and discriminatory bills. We need to be as supportive as we can be and participate where we can, because these are pieces of the same fight for justice.” Originally published in the San Antonio Current. April first met Kenne McFadden when they were eighth graders at Kirby Middle...