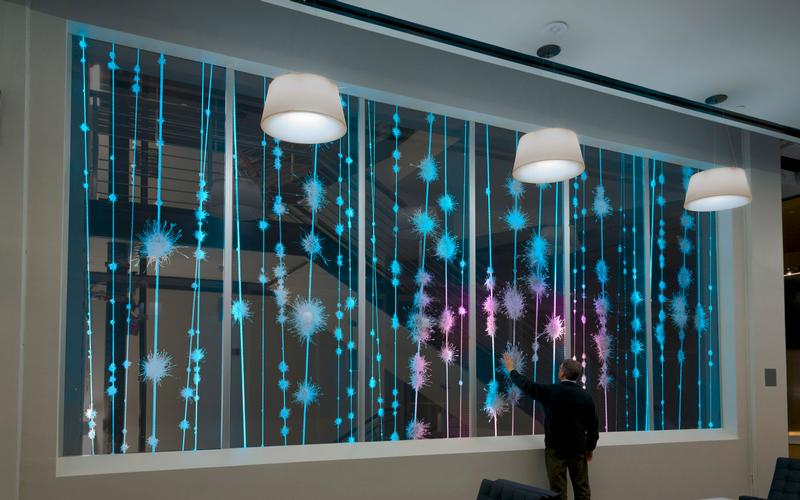 Gene: Hi Ansen! Nice to have you back to the Chartreuse Couch. I know you have been doing some really exciting projects since we last spoke. And all our listeners want the inside insight to your projects. Let’s start with money. You have a great light show at Frost Bank. Start there.

Ansen: Hi Gene. One Frost is the operations center for Frost Bank, out near SeaWorld. This commission is part of a large art collection on four floors of their new building. Time Is Money is an analog timekeeping device displaying hours, minutes and seconds. It was inspired by a water clock that I saw in Berlin. The piece constantly moves and breathes as the seconds fill from top to bottom, and then collapse every minute. Just like on a standard, round clock, the viewer infers the time from the relationship of the “hands” to unmoving index marks. Hours are on the left. Minutes are on the right. Seconds and index marks occupy the middle three stacks … The design of the clock was meant to be a kind of visual puzzle, challenging the norms and conventions we use to tell time. As some employees figure out how to read the correct time, they then teach others, thereby building community within the company. I hope it will be a bit of a brain teaser. Most people look at it and then whip out their iPhone to see if they’re right. Timepiece as anachronism. Gene: Well, you are most inventive. And you have a water image piece in the Lila Cockrell Theatre. How did that get commissioned?

Ansen: Those pieces were commissioned by the the City of San Antonio when the theater was being refurbished in 2012. Not much had been done to the theater since it was built for HemisFair in 1968. The large tile mural on the outside was created in ’68 by famous Mexican artist Juan O’Gorman. It’s called Confluence of Cultures, so I continued that theme inside the lobby and the walls of the theater with images I took from all the confluences of creeks and rivers in Bexar County. I had to kayak to get to most of those places which was a real challenge. Then I used my special slit-scan camera to capture the water in motion. The four illuminated photo/sculptures in the lobby are comprised of multiple layers of clear acrylic panels printed with the light primary colors of cyan, magenta, yellow and black, each on a different layer. The layers are then fused together to produce a 3D sculptural effect. On the interior walls of the theater, a series of 54 LED back-lit photographs are suspended from the ceiling to form a single image of flowing water, creating the illusion of a view out onto a great confluence of rivers. The piece is called Confluence: Flowing Together, referencing our shared heritage as citizens of a great multicultural community. Gene: It seems like that would be an example of a conceptual artwork since we would never know about the water trip involved until you tell us. Pick a third art piece to talk about and then I want to move on to political art.

Ansen: Here’s one I did for the Spurs out at the AT&T Center last year. We’re Good, Right Here is an interactive light installation composed of glass, acrylic, aluminum and LEDs. It’s 11 by 25 feet and reacts to the touch of the viewer.

Gene: And you have a series of photos about nature. I know we all love nature and since it is being driven to extinction by over-population of the planet, it is good to have some photos so that the next generation can reference them.

Ansen: Landscapes come in many forms, especially in Texas which boasts such a wide vista. [We’re Good, Right Here] is an alternative South Texas landscape championing an underdog of the local native plant world — Tillandsia Recurvata, commonly known as ball moss. This much misunderstood plant is neither moss nor parasite as is widely believed. It’s a member of the bromeliad family with roots, flowers and leaves which derives its entire sustenance from dust, rain and sunshine.

Gene: I consider taking up for plant life to be political art. Especially in these times. I suspect you have deeper reasons for the topics you choose?

Ansen: I’m keen on exploring the idea of the connectedness and network of communication between all things. Proof of this idea comes in the recent discovery that ball moss, something so common and easy to ignore, has compounds that are now known to fight cancer and AIDS — and all this from dust, rain and sunshine.

Gene: Well, that is certainly good news. I would like to know how you came upon that?

Ansen: I found that on Wikipedia.

Gene: So does this mean that you aren’t a Spurs fan but that you are using them for your own devious reasons in your art-making?

Ansen: I’m a huge Spurs fan! But in this piece, the idea of “bloom where you are planted” takes on special significance with the hometown success story that is the Spurs. And because the Spurs call the AT&T Center their home, this piece also calls attention to the pivotal role that San Antonio and South Texas have played in the evolution of telephone communications, even to the extent that ranchers in the 1880s used barbed-wire fences to transmit their telephone conversations before rural telephone lines were put in place! We’re Good, Right Here also continues my interest in native plants of South Texas. Previous works with this theme include pieces at the San Antonio International Airport and The Corn Crib at the Land Heritage Institute. As with much of my work, the subjects of We’re Good, Right Here appear both familiar and otherworldly. You can see this piece in person at the southeast entrance to the AT&T Center. The colors it shoots out are the old Fiesta colors of the Spurs! Gene: George W. Backenridge was the first person to have a telephone in San Antonio. It went from his home at Incarnate Word to his building downtown. New York City didn’t even see the point in having phones at that time … Well enough about art. I want to hear your thoughts about what we as artists should be doing to correct world problems now that we have a businessman for president.

Ansen: Businessman would be okay. Serial liar is not okay. Words are important. They direct our actions and our thoughts. But images are important, too. That’s why it’s incumbent on artists to keep doing what they do, which in general, I believe is to fight against racism, homophobia, sexism and fight for the environment. I believe that the opposite of war is art.

Gene: Yes! Yes! My new campaign is “Make America Art Again!” And what about political art?

Ansen: I haven’t done a lot of political art, although I think it’s really important that somebody does it. I’m very engaged in politics, contributing where I can to the causes I believe in.

Gene: There is a recent painting by Vincent Valdez about the Ku Klux Klan. Have you seen it, and what do you think about that?

Ansen: I think Vincent probably has precognitive abilities given the very recent rise in mentions of the KKK in the media. When he was working on that piece, and others before that with the hanging people, I thought they were beautiful, but a bit old-fashioned in referencing the KKK. Turns out he was right on and ahead of his time in a back-to-the-future sort of way.

Gene: I’m afraid the KKK will think it is beautiful. And I want someone to create a play about the people in that portrait — really a powerful work. Ansen: Here’s one that I did a couple of years ago called Congress. It’s a pair of snakes caught in flagrante delicto (red-handed). I thought that was a pretty good metaphor for the way our two-party Congress was working at the time. The problem with political art is that the particular situations are always changing. It makes calling out a particular politician or group a race against the clock. In a short time, your political work is history and everyone has moved on. Certain themes will never go out of style, though, like (as they are known today) income inequality, rights of the minority (pick your favorite) and my favorite, ecological stewardship. So, without calling it political art, I hoped that my work flew under the radar a bit and delivered its message in a subtler form. I guess, given the current political situation, we all need to step up our political game.

Gene: I hope it doesn’t fly under the radar and it gets you in trouble. Well that leads us to UFOs. And I know you know all about that. Have you seen any?

Ansen: Most of my friends know that I’m a big UFO fan from way back. I want to believe … although I’ve never really seen anything I’d call suspicious. My biggest claim to fame in that area is that, for a while, I was the official photographer for MUFON, the Mutual UFO Network. That meant I would go to all the conventions and do headshots of the speakers. I doubled as the bartender in their late-night bull sessions, so I got to meet all the luminaries in the field. I also got to get my hands on some original negatives from the Gulf Breeze flap in the 1990s. I did some analysis of the famous Nimslo 3D camera photos. Pretty weird!

Ansen: The bottom line is this: Extraordinary claims call for extraordinary evidence — and until we have one in our hands, we won’t know for sure. Some claim that we already do have one, but getting the mainstream media to admit it is another thing altogether. At the very least, the subject deserves to not be laughed at by the scientific community. There’s too much evidence to be dismissed out of hand. You just have to be willing to look at it. It’s just like climate science. There will always be those who say, “Don’t bother me with the facts. My mind’s made up.”

Gene: Of course my favorite work is your slit-scan photography. Any new work in that area?

Ansen: Here are a couple of shots I took in Berlin on a recent visit. I showed them at Flight Gallery a couple of months ago at a show called “The Transient Landscape.” This form of shooting still fascinates me. It’s completely unmanipulated. This is just what the camera sees. Gene: And what about your favorite places to eat in San Antonio?

Gene: And you know I always let my guest ask the last question.

Ansen: I want to know if you think Trump will release any of the secrets the government has on UFOs. Hillary hinted that she would do that and Trump has been so crazy and unpredictable … do you think there’s a chance?

Gene: I think there is a good chance it is going to happen one way or another and it doesn’t really matter who the president is. The rest of the world knows and freely talks about UFOs, abductions, etc. Mexico, Japan, Italy, France, Russia — everyone knows! Americans are the only ones who like to remain in the dark. Canada knows. It is really very funny to see how stupid most people are about UFOs. It is like talking to the Flat Earth Society. People keep asking why UFOs don’t land on the White House lawn if they exist. Well, there isn’t any intelligent life there. That’s why!

Originally published in the San Antonio Current Fear is at the heart of Texas conservatives' push for a bill that...