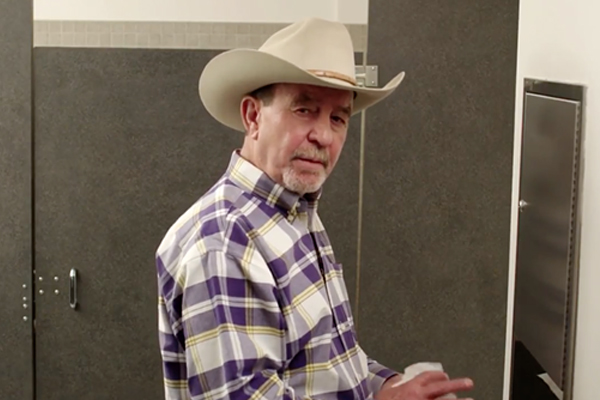 Fear is at the heart of Texas conservatives’ push for a bill that would block transgender Texans from using the restroom that corresponds with their gender identity — a baseless fear that equal rights for transgender people will endanger women and young girls in public restrooms.

So in response, activists trying to stop Senate Bill 6, one of Lieutenant Gov. Dan Patrick’s pet causes for the 2017 session, are trying to leverage humor in the form of acclaimed Texas director Richard Linklater, he of Bernie, Dazed and Confused and School of Rock fame.

The central message of Linklater’s new ad in partnership with the ACLU of Texas this week: “This isn’t a privacy issue. It’s a discrimination issue.”

The ad, which the ACLU says it will promote through targeted buys on Facebook, stands in sharp contrast to the kind of anti-trans messaging that presaged the losing battle for LGBTQ rights in Houston in 2015, when arch-conservatives used bathroom fear mongering to quash the city’s non-discrimination ordinance. SB 6, if passed, would void local protections for transgender Texans that cities like San Antonio have already implemented.

“Lt. Gov. Patrick and other state lawmakers who support S.B. 6 portray the bill as a ‘common sense’ protection of ‘common decency’,” Terri Burke, executive director of the ACLU of Texas, said in a statement Monday announcing the new campaign with Linklater, Austin-based ad agency GSD&M and Legacy Community Health. “There’s nothing decent about a proposed law that would exclude transgender people from public spaces or bar them from participating in public life. With this campaign we hope to raise awareness on the issue and ensure that Texas doesn’t consign our transgender brothers and sisters to second-class status under the law.”

Other lawmakers and business groups have warned SB 6 could have serious negative consequences for the Texas economy, as illustrated by North Carolina’s disastrous attempt to implement near identical legislation cracking down on bathroom access for transgender people. However, earlier this month Patrick pointed to flaws in one business group’s analysis of the bill’s potential economic fallout as reason to call those concerns “bogus.”

Still, North Carolina’s anti-trans legislation ultimately triggered a NCAA boycott that cost the state somewhere between $77 million and $201 million in lost tourism. Some estimate the state could lose $250 million more this year if it doesn’t repeal the law. Many worry that if Texas passes a similar law this session, the NCAA will follow suit and pull the currently scheduled 2018 Men’s Final Four games out of San Antonio, causing an estimated $234 million loss in tourism and tax revenue for the city.

While Gov. Greg Abbott at first seemed lukewarm on the bill, he’s recently become much more vocal on the issue. The bill has yet to make it out of committee, a critical hurdle in advancing toward Abbott’s desk.

If your name is Mary, then you are probably familiar with the popular English nursery rhyme: "Mary, Mary quite contrary..."...