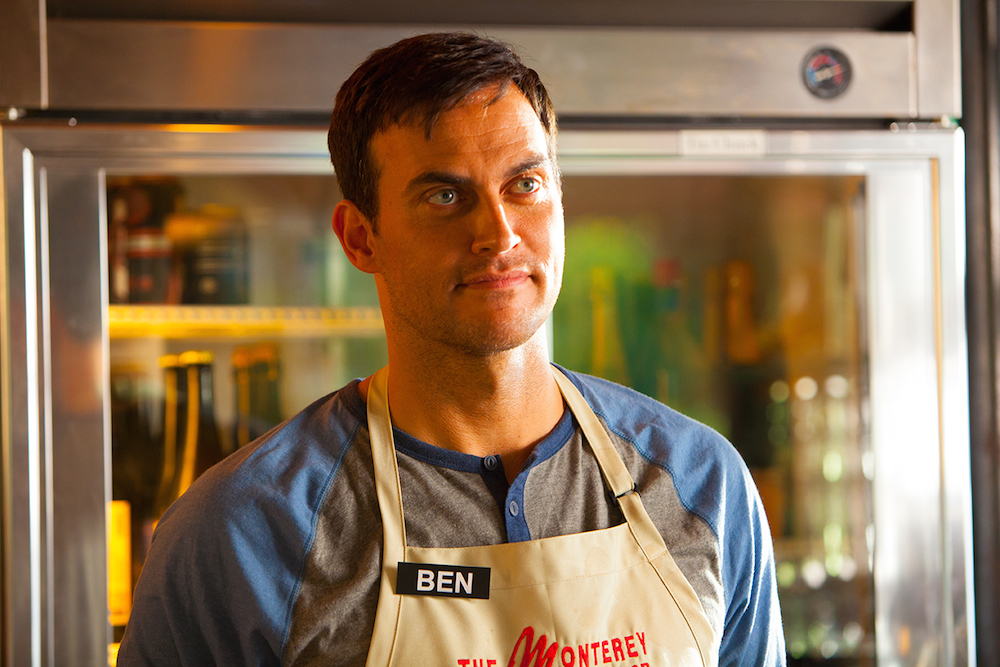 Cheyenne Jackson in "The One I Wrote for You."

Cheyenne Jackson has seen bits and pieces of his new film The One I Wrote for You, but he believes that when it comes to cinematic projects that involve music, it’s always best to see the finished product at the official premiere “with big speakers and people around.”

But he isn’t loosening his tie just yet. Sure, he has a feeling that he’s going to approve of what he sees at the red-carpet premiere at the Santikos Palladium IMAX theater December 2, but he has endured the unpleasant and perhaps inevitable experience of attending one of his film premieres only to publicly discover that the end product has been transformed radically in the editing room–a process over which most actors historically have little to no control.

How does that make you feel? I ask via phone.

“Terrible!” he says as if reliving several particular experiences simultaneously. “It’s a bummer because after so much time and effort, you want your films to be great and for people to love them, and for [the movie] to be cohesive–and to tell a story and [be] smart and all the things that you work so hard in every single scene to get.”

He describes the feeling of being at a film festival when a movie “just doesn’t work” because it either “doesn’t edit together well” or has “uneven performances” or “weird tonal shift.” Or, in some cases, all of the above. “It’s tough to sit through,” he says.

As far as he can tell, The One I Wrote for You, which stars Kevin Pollak, Christine Woods, and the venerable Christopher Lloyd, may be an opportunity for Jackson to add to his list of “cohesive” films.

The 39-year-old actor would also classify this as his first “family film,” which appealed to him personally. Jackson, whose brother is a pastor, says he’s excited to finally do something his entire family “could actually see.”

The flick may also be of interest to local families. Last year, it shot for 22 days in and around a handful of San Antonio’s most cherished landmarks and the script was written by Alamo Heights resident David Kauffman.

Relating to his character Ben Cantor, a performer and songwriter, wasn’t difficult. Ben is an artistically ambitious singer who put his career on hold to raise a family. A decade later, when his daughter Gracie (Avi Lake) enters his name in a new reality-television competition called The Song, he gets a second shot at fulfilling his dreams, but at the price of possibly losing a vital link to his true self and his family.

“[For] every artist, there comes a time when they compare themselves to their peers,” Jackson says. “They compare their lives to the dreams they had for themselves. You know, ‘I’m going to do this by a certain time’ and ‘at this age, this is going to happen.’”

The theme of dreams not realized was something he thought he “could totally get into and have fun with,” Jackson says. He knows after a first reading of a script if a project is right for him. “I would know when I start reading it out loud–rather than just silently–and I hear the character’s voice in my head.”

The fortuitous Jackson has earned some substantial roles in New York stage productions of note, including the part of Matthew in the New York Musical Theater Festival performances of what would go on to be the award-winning Off-Broadway hit Altar Boyz. He left when he was offered “a better opportunity” in the Broadway production of All Shook Up, a move that would score him a 2005 Theater World Award for Outstanding Broadway Debut.

Altar Boyz, in particular, certainly had its finger on something in the way it mirrored pop culture’s seasonal infatuation with boy bands and Christian pop. “It didn’t make fun of Christianity,” he says. “These boys were grappling with their faith, but they loved God. But they also loved being in the band. It was very witty and positive.”

The same thing happened when he starred in the developmental workshop of the religious musical satire Book of Mormon. “The first time we sang through it with the audience it was like, ‘Are you kidding me? You know it’s going to be so amazing,’” he recalls. “It was special. I can always tell that something is in the zeitgeist at the moment.”

Jackson’s first feature-film role was as Mark Bingham in United 93, the 2006 biopic about the hijacked 9/11 flight that crashed into a Pennsylvania field after the passengers reportedly overpowered their captors. “It was exciting. It was scary and it was exhilarating. I didn’t take it lightly that I was playing someone that was real. I got to meet his boyfriend, his mom, and people who knew him. I took it very seriously. As we all did. It was a really special time, especially in film. We were the first film that the family of the victims gave permission to tell this story. It was a huge responsibility.”

And in what insiders might call a poetic union, Jackson released The Power of Two (2009) CD with Great American Songbook revivalist Michael Feinstein. He says they’ve been friends for so long, that exactly how they met escapes him. “We have the same musical sensibility …even though we are from different generations. We just really like each other.”

The One I Wrote for You is the first film that merges Jackson’s acting and singing talent so intimately. It’s also the first time he’s been able to sing on film.

“I sang a little bit on 30 Rock, but that was for comedic effect,” he says. “I was on Glee but I didn’t sing on Glee, which was weird.”

Jackson admits he’s been “itching to do a musical.” He’s come close to being cast in such movie musicals as Frozen, Tangled, and the soon to be released film adaptation of Into the Woods. “I’ve been trying to show that side,” he says optimistically.

Until his “actual musical” comes along, The One I Wrote for You, which contains 14 original songs, also by Kauffman, could certainly do nicely. “There’s so much music in it, it’s almost like a musical,” he says with a chuckle.

And Jackson isn’t sitting around waiting for his phone to bleep, either. He released his first solo album in 2013 entitled I’m Blue, Skies and is currently hard at work on a follow-up.

Jackson even found time to give marriage another shot.

In November 2012, Jackson’s home state of Washington became the 10th state in the union to extend the right to marry to same-sex couples. The Spokane native is part Hollywood’s new generation of LGBT luminaries that are reaping the benefits of non-surreptitious relationships.

So Tinseltown scandal must be gleaned elsewhere. Readers of the New York Daily News, for example, may be under the impression that Jackson met his second husband in rehab. But that’s not exactly true.

“Yeah. I don’t know where that started,” he says. “My mom was like, ‘You’ve never been in rehab!’ ‘I know, but somebody said it and it’s been written down so people think it.’ But whatever. I’m fine with my sobriety. It doesn’t matter.”

Jackson vaguely remembers someone writing on a gossip site that he was in a 12-step program and the tidbit grew wings. “First of all, that goes against everything that 12-steps are all about. Anonymous? Hello.”

Despite the fact that the mingling of Alcoholics Anonymous culture with a show-business lifestyle could bring a few probable challenges, Jackson seems focused and even gallantly undeterred.

“I’ve made my sobriety a priority,” he says. “It’s changed my life. It’s informed every aspect of [it, both] spiritually and artistically.”

So he isn’t ashamed to rep AA.

“It wasn’t something that I had to think about owning because I’m actually really proud of my sobriety.”

And with any luck from the editing gods, the holiday season may bring him a new “family” film to be proud of, as well.

“The One I Wrote For You” opens December 2 at the Santikos Palladium IMAX in San Antonio and on December 5 in 13 Texas cities and in Los Angeles.

Jade Esteban Estrada was a stand-in for actor Kevin Pollak in the film.

Cheyenne Jackson, film, gay, marriage, movies, San Antonio, The One I Wrote for You

In years past, Equality Texas organized a Lobby Day when LGBT constituents would visit members of the State Legislature to...