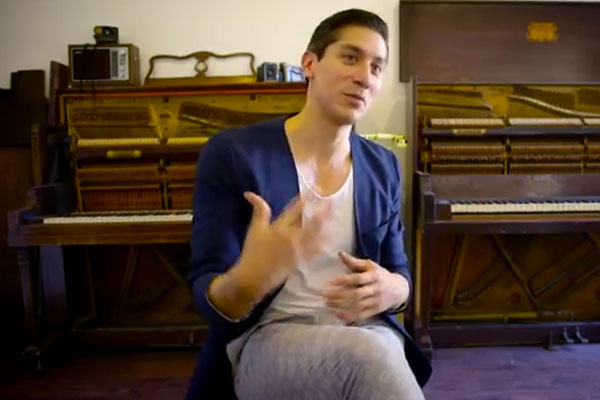 Composer Nathan Felix will perform the Classical Music Kegger with members of the Chamber Orchestra of San Antonio on May 7. (Video capture via KLRU)

A former punk rocker and self-taught composer, Nathan Felix, is teaming with the Chamber Orchestra of San Antonio (COSA) for an evening of classical music to benefit area schools in lower income neighborhoods.

During this unorthodox performance, the audience will sit in the center of the room surrounded by the six pianos, and afterwards, each piano will be given to area schools with the goal of enriching their music education programs.

The Classical Music Kegger, an ongoing event, comes to the Alamo City after it was first introduced in the musician’s hometown of Austin in November 2015. The idea for the event came after Felix witnessed an opera performance at a train station during his time living in Los Angeles.

In a short film produced by Austin’s KLRU-TV, Felix reveals he was inspired to create something “bold” and “challenging” that would make classical music more accessible to the undeserved communities in his own state. “I want to start grooming and growing the next crop of young, talented kids,” he said.

Three years ago, when Blue Hess decided he would volunteer at The Children’s Shelter, he never imagined he’d become one...