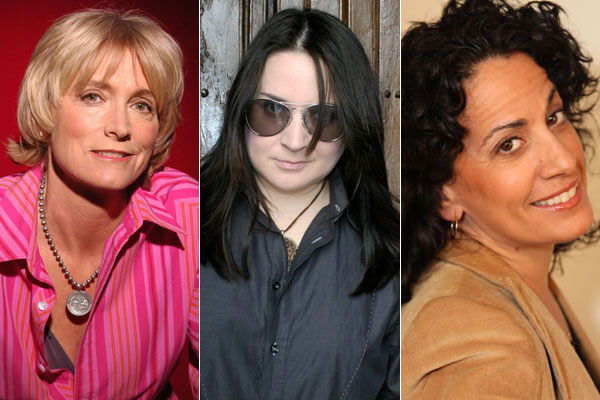 Poppy Champlin, Sandra Valls and Mimi Gonzalez are the "Queer Queens of Qomedy" who will perform at the Laugh Out Loud Comedy Club on July 13 and 14. (Courtesy photos)

Comedian Poppy Champlin is coming back to San Antonio on July 13 and 14 with her unique comedy revue, The Queer Queens of Qomedy, and she’s bringing with her two of the funniest lesbians in the business.

The bio on her website describes Champlin as, “one of the quickest witted comedians working either coast today. She has a wild and roaming spontaneity, which makes each show actually feel like one of a kind. She is a powerful performer who can glide between practiced patter and off the cuff insightful improvisations. Poppy’s experience with classic standup and improv, gives her a double-barreled flexibility that works particularly well with her subjects of choice.”

For this year’s Texas tour, which include stops in Dallas, Austin and Houston, Champlin is bringing Sandra Valls and Mimi Gonzalez. The show will take the stage for two nights at the Laugh Out Loud Comedy Club.

Valls, a native of Laredo, Texas, who now lives in Los Angeles, has been featured in two Showtime specials, “The Latin Divas of Comedy,” and “Pride: The Gay and Lesbian Comedy Slam.” Curve Magazine has boasted that Valls is “one of the top badass comics to watch for.”

Gonzalez is an Ohio-born, Michigan-raised Cuban-Italian-American. According to her website, “There’s nowhere she won’t go to make you laugh, including Bosnia, Iraq and Afghanistan to entertain the US military. Just let her hold the gun. She’s from Detroit and is a pretty good shot.”

The announcement for the “Queens” show on the LOL Comedy Club website makes this boast, “This show is guaranteed to be a full night of rip roaring, foot stomping, pain from laughing, fun. So don’t miss a minute of it!!”

Pride on the Strip Raises $22K for Orlando Victims

Proceeds from a block party held during this year's Pride festivities, along with donations from local businesses and community members,...