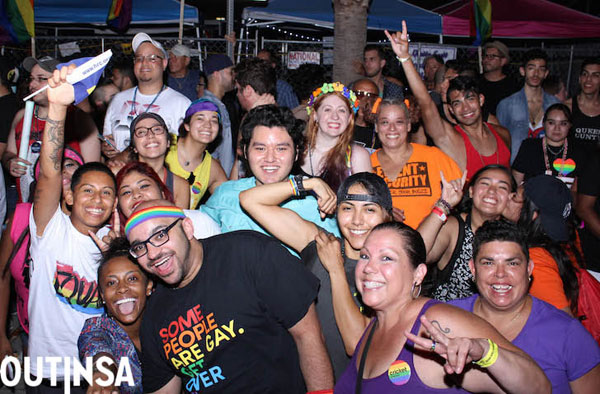 Proceeds from the Pride on the Strip block party raised over $22,000 for the Pulse Victim's Fund. (Photo by Julián P. Ledezma)

Proceeds from a block party held during this year’s Pride festivities, along with donations from local businesses and community members, raised over $22,000 for the Pulse Victim’s Fund for those who died in the Orlando shootings.

The announcement of the funds raised by the July 2 party, dubbed Pride on the Strip, was made on July 9 by Randy Cuniff  of Texas Heat Investments.

Cuniff said the total amount raised came from several sources, the largest amount, $11,052, came in the form of cash donations from gate receipts at the event.

Representatives from several local area charities, the Renegade Bears, the Sisters of Perpetual Indulgence, the Alamo Empire and the Texas Gay Rodeo Association, volunteered at the event and manned donation stations at the entrances to the block party.

“Thank you to everyone who helped us with our fundraising for the Orland Pulse Victims Fund,” Cuniff said in his announcement. “We wanted to help the families who have been affected by this tragedy and felt by doing this we would enable the San Antonio community as a whole, to have the biggest financial impact possible.”

Texas Has a Sizable Trans Population. So Why All the Anti-Trans Politics?

Originally published in the San Antonio Current A recent study conducted by researchers at The Williams Institute at the UCLA...