With Fiesta San Antonio postponed until November, the organizers of Fiesta Cornyation are cooking up a special livestream fundraiser on April 23 for those who don’t want to wait until the fall to partake of what is billed as “the raunchiest, cheapest event of Fiesta.”

“Ruling as fake royalty means I can throw any damn kind of party I want. Join me and my Cornyation family on Thursday night as we celebrate our would-be Fiesta with a livestream of a Cornyation past,” Jesse Mata, King Anchovy LV, said in a Facebook post.

“This is the first time we’ve shared the show in its entirety, so come and cheer on your favorite Queens and queens in the comments. We’ll post links to donate directly to our charities, San Antonio AIDS Foundation, BEAT AIDS, and Thrive Youth Center,” Mata said. 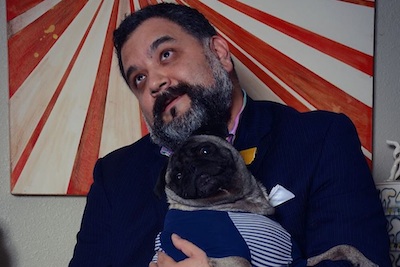 The show to be screened is the work of filmmaker David Sims of Astrobleme Films who in 2018 produced a 20-minute documentary about Fiesta Cornyation. The following year he created a full-length version. Sim’s told Out In SA at the time that he was “excited to really unpack the Cornyation story and profile the dedication of many of the artists, entrepreneurs and truly passionate and talented individuals that work tirelessly to pull Cornyation off year after year.”

“Since we’re partying more like Howard Hughes this year, we bring you this morsel of Corny magic courtesy of our good friends at Astrobleme Films.” the event announcement explained. “We’ve pulled a full performance from our pantry to share and will offer direct links to support our charities. Drop in and . . . if you’re able, drop some coin in the collection plate for our community.”

In recent years, Cornyation has raised approximately $200,000 annually for a variety of local nonprofits. The livestream event will serve as a stop-gap in anticipation of additional funds which will be distributed after the autumn performances, which are slated for November 10 through 12.

In the meantime, King Achovy LV has made his proclamation clear, “See you all Thursday night at 8:30. Don your finest Fiesta panty (or don’t) and crack open a gallon of day glow margaritas, it’s time to get fishy!”

The Houston-based nonprofit, Texas Pride Impact Funds, announced on April 20 that it has awarded $120,000 among 26 LGBTQ organizations...