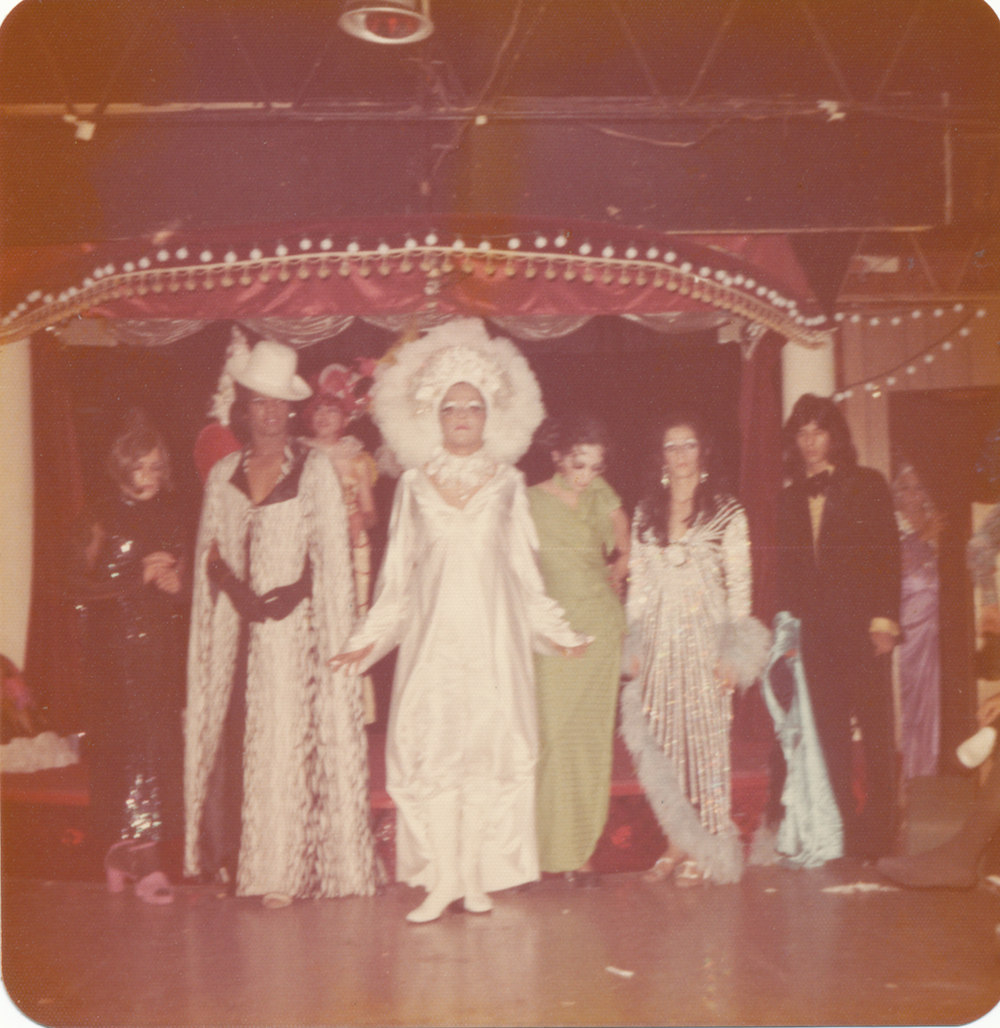 They would eat tuna-fish sandwiches with watermelon by the river until it was time to go into the bar and get dressed for the evening.

John McBurney and I sit down at the table to look at just a handful of the hundreds of Polaroid pictures he has stashed away from the Ponderosa. He’s one of the few people left who spent formative years at the bar, which was home to a largely undocumented part of local gay history.

John is a retired professional freelance makeup artist who worked with stars such as Selena, Jennifer Lopez, Bill Gates, and George Strait, and many San Antonians know him from his stage creations for the annual Fiesta Cornyation fundraiser. He grew up in San Antonio with his younger brother, Abby, who was tragically murdered in 1986. He remembers what it was like to be a gay Latino in the ’60s. John and Abby were close with a neighbor, who was also gay, and together they explored the underground world of dresses, makeup, heels, and glitter on the South Side of San Antonio. Abby made it big in Houston as a female impersonator, but he got his start at the Ponderosa.

If you were gay, you knew about the Ponderosa through word of mouth–someone told someone who told you. The majority of the bar’s patrons were Latino and black gay men, but there were also Latina and black lesbians and white men and women. On weekend nights the bar was crowded and loud, a warm place where you could hold your partner’s hand. Customers would make the 30-minute drive to Von Ormy, just outside the city limits, stopping on the way at a 24-hour truck stop that sold snacks, Coke, and gas. 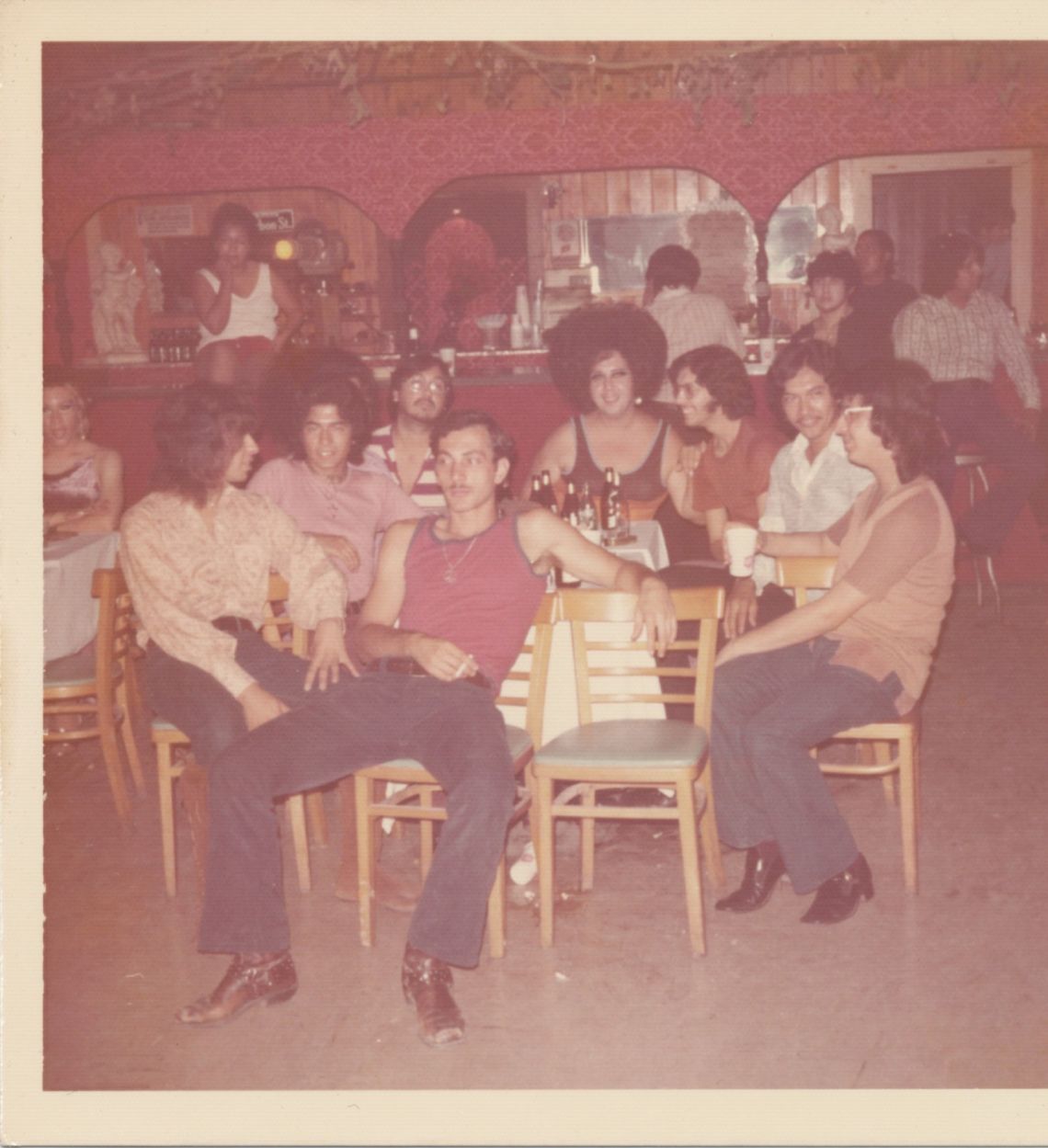 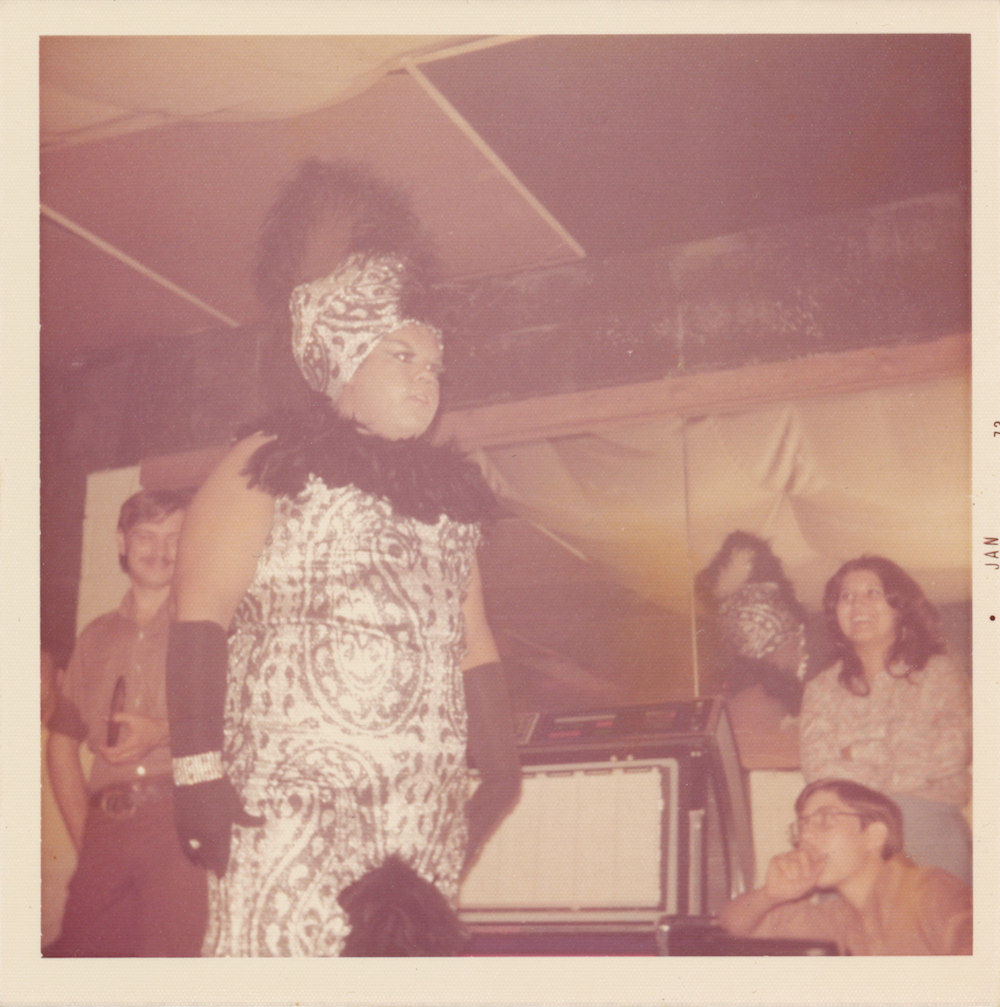 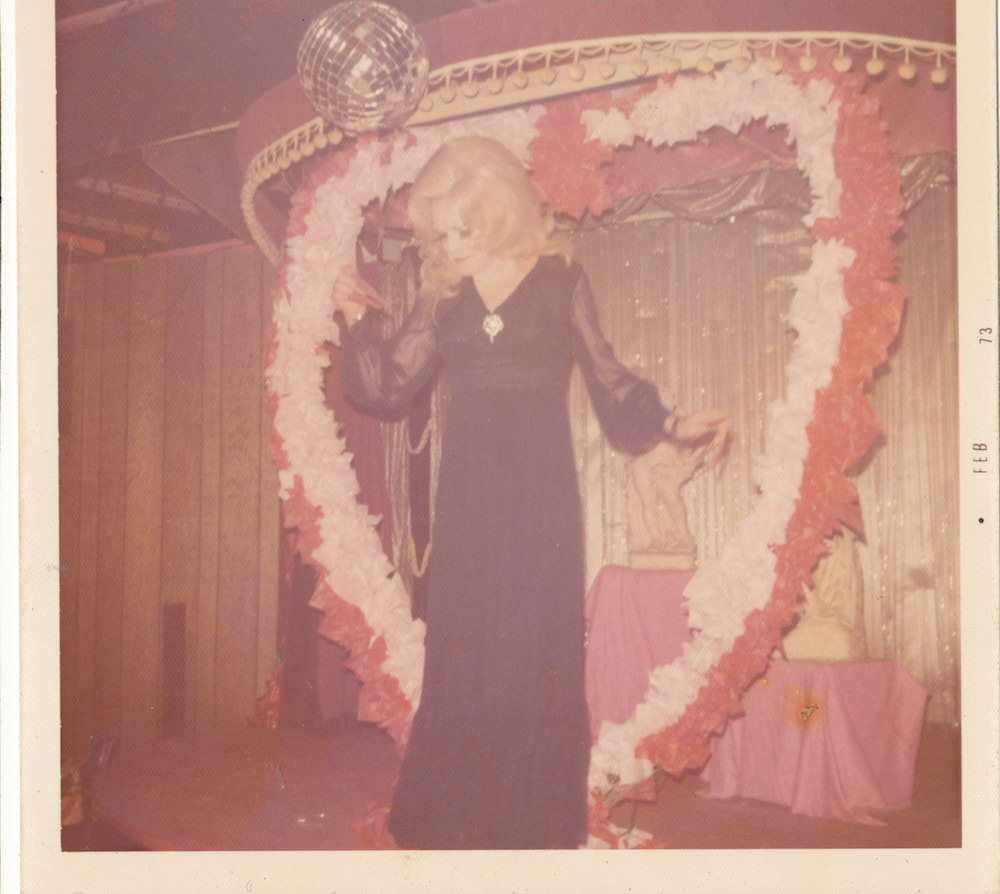 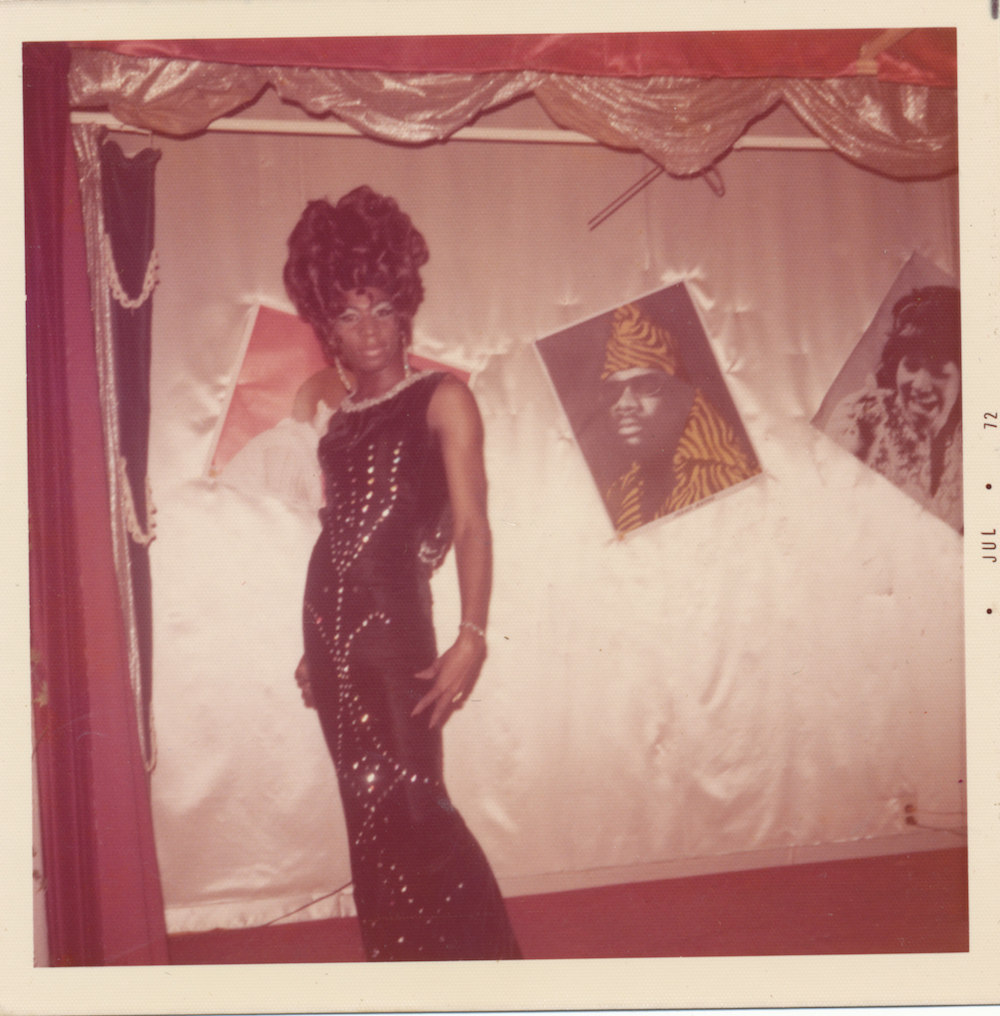 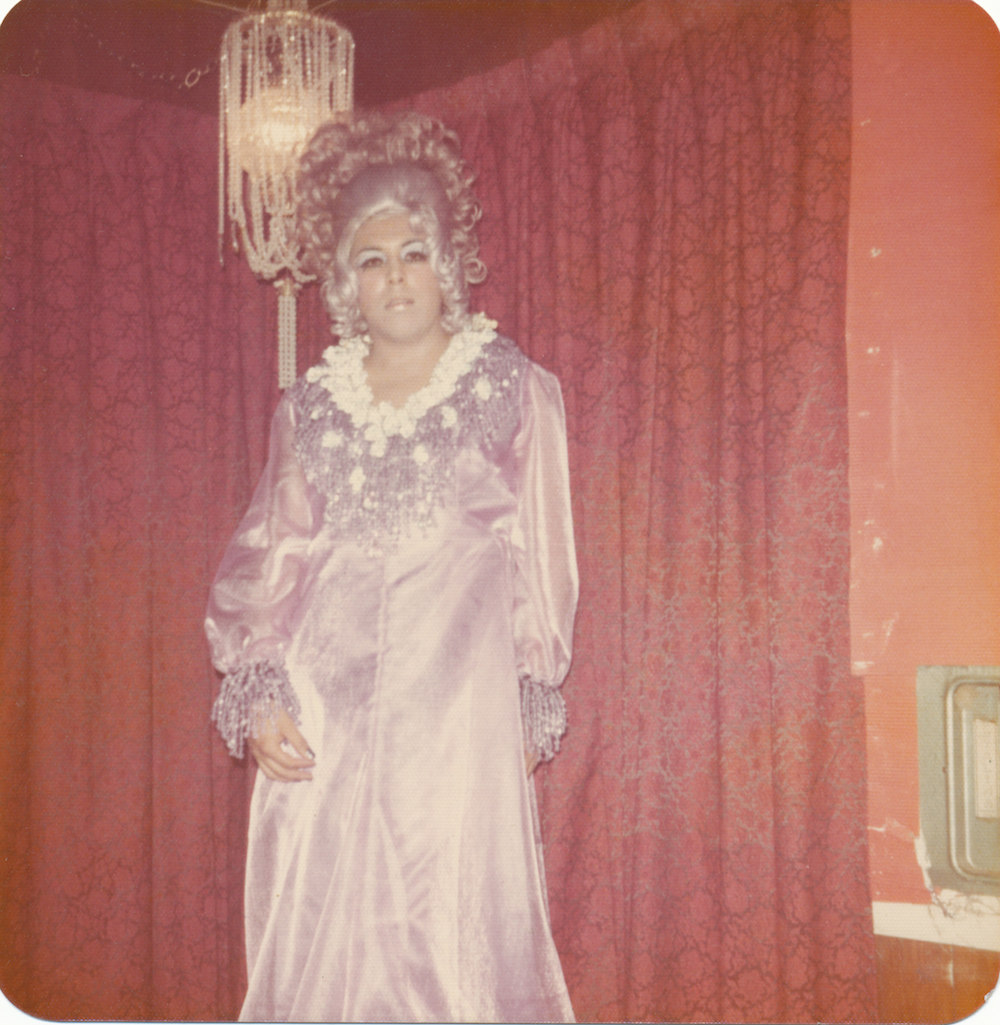 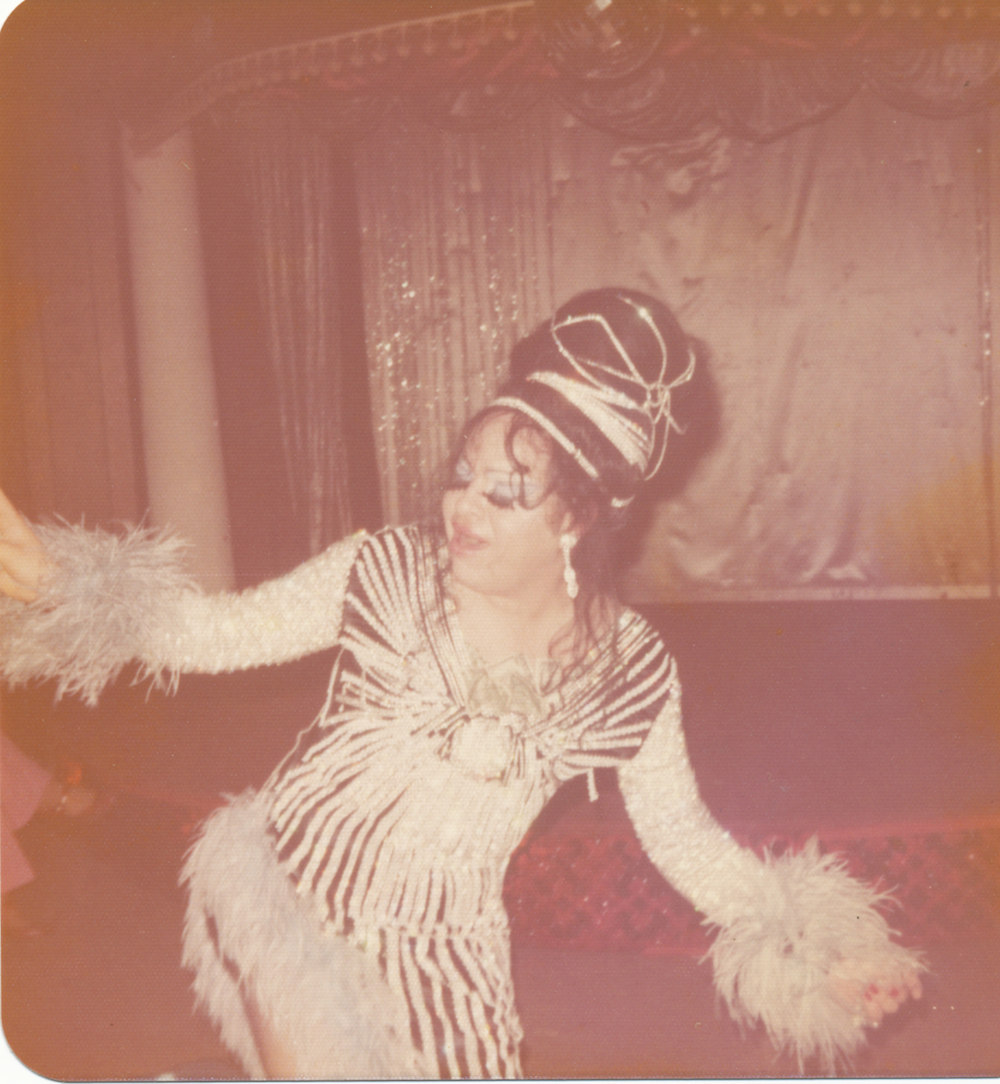 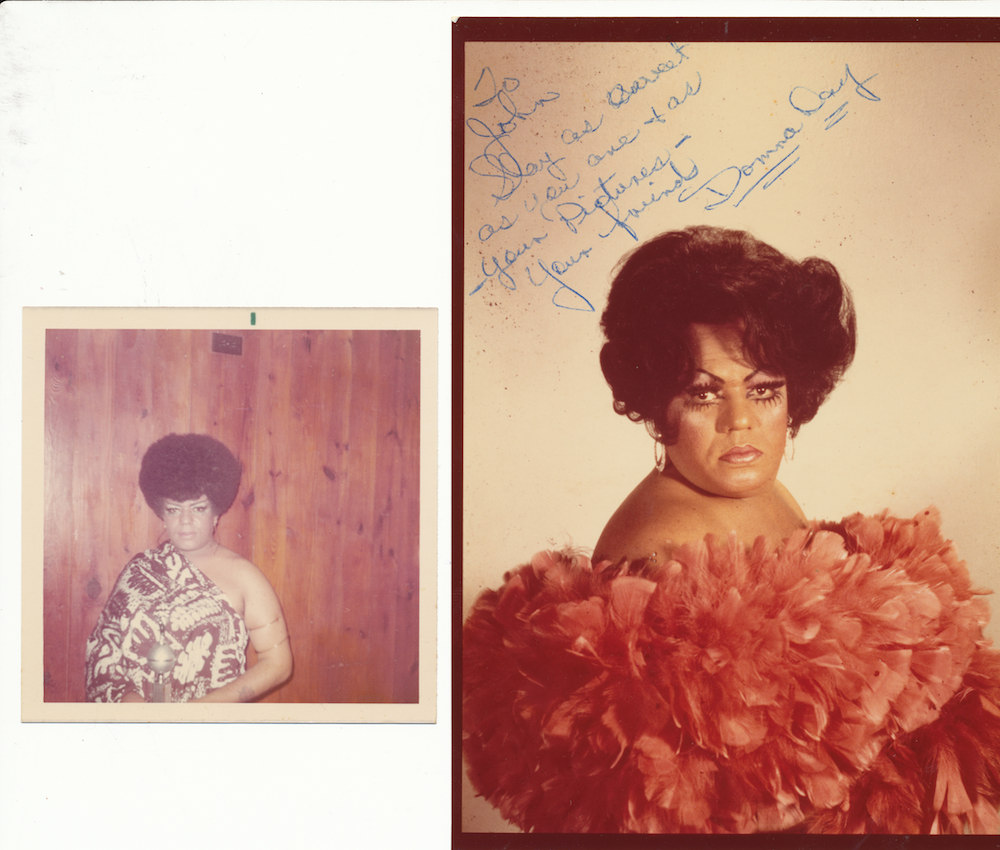 The exterior of the Ponderosa was a large, aluminum building that reminded John of an old airplane hangar. Tucked underneath I-35 South, it was the kind of place you only found if you went looking for it. John describes walking into the Ponderosa as if it were like entering the magical wardrobe passage to Narnia. As you opened the door into a short hallway, he recalled, your nostrils filled with a familiar smell of cigarette smoke, spilled beer, the pine cleaner used to mop the floor, heavy perfume and cologne, and the scent of burning candles. The jukebox would be blaring its collection of 45s: Lucha Villa, The Supremes, Aretha Franklin, and Ray Charles.

The bar was immediately to the right of the entryway, filled with smiling faces sipping beer and wine coolers. Beyond the bar, the floor opened up to a spacious dance floor that stretched across the room to a large round stage. The inside of the bar looked as though it were dipped in red velvet. The patrons wanted to feel luxurious and glamorous, and they did. Tufts of pink and red taffeta filled empty spaces and enormous chandeliers dripping in faux jewels hung from the ceiling. A sparkling disco ball danced above the stage while tacky tiki lanterns illuminated the bar.

John’s already vibrant stories are brought to life with Polaroids documenting afros, larger-than-life wigs, frost-blue eye shadow, clown-white makeup, and rhinestones. He remembers the Ponderosa as a place that left a legacy of creativity, and a love for drag—old-school drag, where devotees learned by trial and error. Sephora and MAC weren’t in business yet, so performers worked with what they had. The Ponderosa was a place where raw talent went to bloom. They created stunning outfits with headdresses, sequins, feathers, ruffles, and wigs. They pushed fashion to its limits and made no apologies. It was very liberating and very innocent. They were unaffected by the outside world, lost in the moment. In John’s photos, everyone looks genuinely happy, relaxed, and free, whether drinking at a table, dancing on the floor, or performing onstage.

“The bigger the hair, the closer to Jesus, we used to say.”

The Ponderosa was a popular hangout on weekend afternoons, too, with a winding river that ran next to the bar where they would swim in the sun. Owner Fernando Lerma would host large barbecues, and the bar had its own baseball team, which would compete against patrons from gay bars in town. John remembers buying watermelon from an older Mexican man who would come by with a truck full of fruit and Mexican candies. He and his friends would head out to the country early on a sunny afternoon in blue-jean cutoffs and eat tuna-fish sandwiches with watermelon by the river until it was time to go into the bar and get dressed for the evening. The Ponderosa created a community where gay men could spend time together, apart from the straight world.

John never performed at the Ponderosa but he served as designer, makeup artist, and much more for Abby. The Ponderosa’s queens performed elegant, luxurious drag; they wanted to feel like stars. These were big, tall men in ball gowns; they had no choice but to make their own costumes. Looking through the pictures you can tell how much time went into each stunning outfit. This was RuPaul’s Drag Race before RuPaul. They had raw talent, passion, and freedom. They were free to create what they wanted and they had the time of their lives with it. Aretha Franklin, The Supremes, Ray Charles, Stevie Wonder, Cher, and Isaac Hayes were favorites of the impersonators.

The Ponderosa hosted competitions each month for titles including Miss Sweetheart, Miss Cinco de Mayo, and the Queen of Soul, and their own Academy Awards with categories such as Best Performer, Best Costume, and Best Song. John points out a photo from the Best Costume category. The original performer couldn’t model the costume, he said, so they had to choose someone else to compete in it because the competition was really judged by the outfit, not the performer.

As we go through the pictures, John smiles warmly at each one, observing details I hadn’t noticed. The Polaroids are filled with metallic gold, laughing faces, backup dancers, feathers, long legs, and sass. He shouts the names of old friends with excitement: Donna Day, Miss Evelyn, Miss Erica, Miss Camille, Miss Peggy. He points to an old friend in a photo and grins as he tells me they used to call her “No Teetha Aretha.”

He chuckles. “The bigger the hair, the closer to Jesus, we used to say.”

The evening was billed as a Rainbow Extravaganza, a "gay pride mini vogue ball" held at the Uptown Studio on...