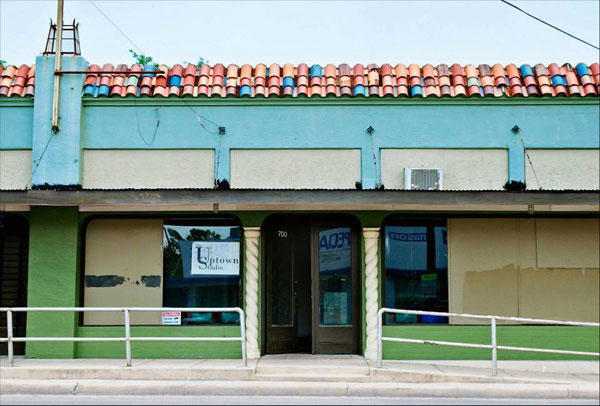 The evening was billed as a Rainbow Extravaganza, a “gay pride mini vogue ball” held at the Uptown Studio on July 3. However, at around 2:30 a.m., as the event was winding down, the party was raided by police and vice squad who arrested three individuals for selling liquor without a permit and cited the building’s owners for various code infractions.

The event, which started at 10 p.m. at the Uptown Studio on Fredericksburg Road in Beacon Hill, was slated to end at 4 a.m. There were a series of performances followed by a vogue ball and contest with an assortment of cash prizes.

Stephan Gaeth, one of Uptown’s proprietors, told Out In SA that as some of the last dances were being performed, four police officers entered the studio through the back door walking past several people who were standing outside drinking.

Shortly after police entered there was the sound of a woman screaming. That woman was Breezy Raynae, one of the dancers who had performed earlier in the evening. Raynae was walking around topless. Witnesses say she had pasties at the start of the evening but they had fallen off during her dance performance.

According to Gaeth, a policeman pulled a curtain from a wall and tried to cover up Raynae with it. She began screaming at the police to leave her alone. “That’s when a lot of folks started screaming,” says Gaeth. “Some tried to leave but front door was locked and police formed a barricade to those who wanted to leave.”

A YouTube video of those first panicked moments was posted on the day after the incident. The video shows at least one undercover officer in a grey Spurs t-shirt and three uniformed officers who attempt to subdue Raynae against a wall. Several posts on Facebook stated that Raynae was arrested but the police report does not indicate that she was.

A few minutes after the first policemen entered the building, they were joined by at least six more officers, Gaeth explains. He says he counted six patrol cars, three police SUV’s and a paddy wagon.

According to the police report, a call came in at 1:20 a.m. to the SAPD vice unit from the central dispatcher saying a party was being held where alcohol was being sold without a license.

Two undercover officers went to the Uptown Studio and paid $15 each to enter the party. They were told by the doorman that drinks were free after the purchase of a red plastic cup for $2.

Once inside, one of the undercover officers purchased a mixed drink and was charged $4 for it. Shortly afterward, uniformed officers entered the building.

Three people were arrested for selling liquor without a license:  Roxanne Eguia, who police say was the organizer of the event; Unique Stefana Koch, the bartender; and Daniel Latourette, the doorman.

The vice squad seized six bottles of hard liquor, six bottles of champagne, three bottles and a box of wine and 65 cans of beer. They also took possession of $831 in door receipts and $261 from liquor sales.

Gaeth says the building was cited for various code violations like the lack no smoking signs, proper fire extinguishers, fire exit lights and other infractions including one for having the front door locked. “There may have been too many people in the building,” Gaeth told Out In SA.

One witness who spoke to Out In SA says when he left the event around 1:45 a.m., there were several police cars already parked up the block. What remains unknown is who called the police in the first place.

The Uptown Studio is located in a building that is subdivided into various businesses including the Jump Start Performance Company and K23 Gallery. The Uptown hosts a variety of events throughout the week including dance classes, art exhibits and seminars.

Beacon HIll is also home to the French and Michigan Gallery, which is a block east of the Uptown and been the source of friction with local residents who oppose the gallery’s zoning because of the traffic and parking problems they say it creates.

It’s a lazy Sunday afternoon in late July and we’re sitting in a steaming hot apartment. We moved in a...