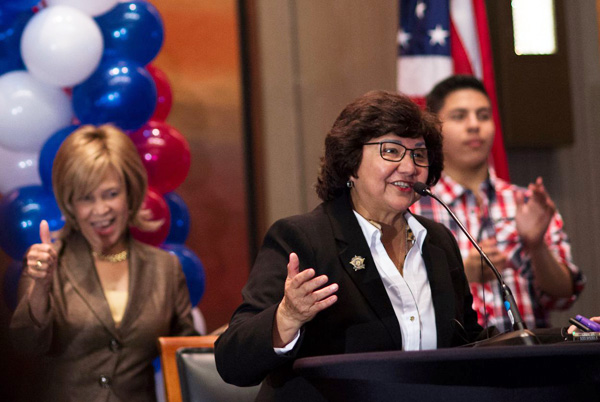 In an interview Monday, Valdez described herself as “in the exploratory process,” looking at the data for a potential run against the Republican incumbent. “I’ve been approached and I’m listening,” she said.

There are 35 days until the candidate filing deadline for the 2018 primaries, and Texas Democrats are looking for a serious contender to take on Abbott. Valdez said she believes it’s “time for a change” in GOP-dominated state government.

“Too much of one thing corrupts, and I’m a strong believer in a two-party system,” Valdez said. “I’m hoping that enough people are seeing that too much one-sided is not healthy for Texas.”

First elected in 2004, Valdez is serving her fourth term as sheriff of Dallas County, the second most populous county in the state and a Democratic stronghold. She is one of only a few female sheriffs in Texas and the only Hispanic female sheriff in the country.

Abbott and Valdez have a history. In 2015, they clashed over her department’s policy regarding compliance with federal immigration authorities — an issue that later came up in Travis County, which includes the state capital of Austin. Those debates drove support behind the “sanctuary cities” bill that Abbott signed into law earlier this year. (That law is currently the subject of a legal challenge working its way through the courts.)

So far, only little-known Democrats have lined up to challenge Abbott, a group that includes Dallas businessman Jeffrey Payne and Tom Wakely, a former congressional candidate from San Antonio. In recent weeks, Andrew White, the son of late Gov. Mark White, has said he is considering a run. And Michael Sorrell, the president of Paul Quinn College in Dallas, continues to get mentioned as possible contender.

The filing period for next year’s elections opens Saturday and ends a month later.

National LGBT organizations are speaking out against gun violence after news that 26 people attending Sunday church services were senselessly...