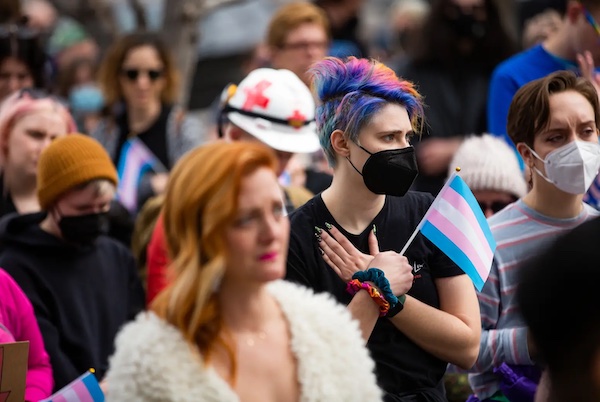 Jey Austen listens to the testimony of an anonymous transgender child during the Trans Kids Cry for HELP! rally on March 13, 2022, against Gov. Greg Abbott's directive to investigate parents who provide gender-affirming care to their kids. (Photo: Lauren Witte/The Texas Tribune)

The high court also raised questions about why the state opened these investigations in the first place, noting that the child welfare agency is not bound by directives from the governor.

Texas’ child welfare agency remains blocked from investigating the family of a transgender teen that sued the state in March, but can once again investigate other families that provide gender-affirming care after the Supreme Court of Texas struck down a statewide injunction Friday.

Though it overturned the injunction on procedural grounds, the high court raised questions about why the Department of Family and Protective Services opened these investigations in the first place. The court affirmed in Friday’s ruling that neither Attorney General Ken Paxton nor Gov. Greg Abbott had any grounds to direct the agency’s actions.

In February, Paxton issued a nonbinding legal opinion that equated certain medical treatments and procedures for transgender teens with child abuse. Abbott, citing that opinion, then sent a letter to DFPS directing the agency to investigate parents who provided gender-affirming care to their transgender children.

In a statement responding to the order, DFPS said it would “follow Texas law” as laid out in Paxton’s opinion, “[i]n accordance with Governor Abbott’s directive.” The agency proceeded to open at least nine investigations into parents of transgender children.

“The Governor and the Attorney General were certainly well within their rights to state their legal and policy views on this topic, but DFPS was not compelled by law to follow them,” Friday’s ruling reads. “DFPS’s press statement, however, suggests that DFPS may have considered itself bound by either the Governor’s letter, the Attorney General’s Opinion, or both. Again, nothing before this Court supports the notion that DFPS is so bound.”

The ruling does note the myriad “informal mechanisms” through which elected officials can influence a state agency, but “ultimately, however, one department or another has the final say.”

DFPS employees have told The Texas Tribune that agency leadership has acknowledged that these investigations do not meet the current requirements for child abuse and have said policy would need to be generated to match the governor’s directives.

In March, a district judge granted an injunction blocking the state from continuing these investigations or opening new ones. Paxton appealed that decision to the Third Court of Appeals, which reinstated the statewide temporary injunction.

In this case, the justices ruled, the “parties” are the family that sued the state initially — not all parents of all transgender children.

Ian Pittman, an Austin attorney representing two families of transgender children that are under investigation for child abuse, said the injunction had allowed his clients to “breathe a sigh of relief” while their investigations were paused. Although the investigations can resume, he’s hopeful that DFPS will now close out the cases.

“This ruling reaffirms that [DFPS Commissioner Jaime Masters] acted improperly when she acknowledged the directive and said they would follow it,” he said. “She was abdicating her responsibilities as commissioner to a political stunt that has no legal authority.”

If DFPS does not close out the cases, he expects other families may consider bringing suits to get any investigations against them similarly blocked.

In a statement, Lambda Legal and the American Civil Liberties Union of Texas called the ruling “a win for our clients and the rule of law.”

“It would be unconscionable for DFPS to continue these lawless investigations while this lawsuit continues, and we will not stop fighting to protect the safety and lives of transgender youth here in Texas,” the statement said.

DFPS did not immediately respond to request for comment.

Pride San Antonio has organized the Pride Bigger Than Texas Parade for the past 19 years. San Antonio's key tourism-promotion...