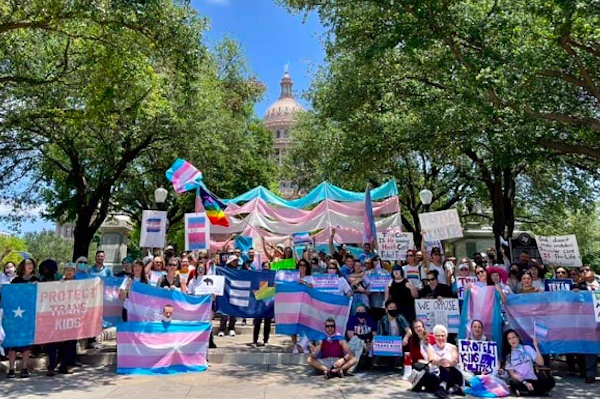 Advocates rally at the Texas Capitol last year in support of transgender youths and their families. (Photo: Twitter / @The_Ada_Rhodes)

The billboards purchased by the Trevor Project will educate the public about life-saving crisis services while spelling out the importance of gender-affirming care.

The billboards went live this week in San Antonio, Dallas, Austin and Houston, and feature messages the group described as a “clarion call of support for trans and nonbinary youth and their families.” The Trevor Project offers suicide prevention and mental health assistance for LGBTQ+ young people.

Last week, a judge ruled that Texas can’t legally investigate parents using that justification. Even so, Texas Attorney General Ken Paxton, also a Republican, appealed the decision, tweeting that investigations could continue as a result of his legal challenge. In a statement provided to the San Antonio Current, the Trevor Project said the billboards will educate the public about its life-saving crisis services while spelling out the importance of gender-affirming care for young people. The ads also include messages of love and support for trans and nonbinary youth and their families.

A poll conducted on behalf of the Trevor Project showed that 85% of transgender and nonbinary youth, and two-thirds of all LGBTQ+ youth, say recent debates about state laws restricting the rights of trans people have hurt their mental health.

The new campaign follows a move by 60 major corporations, including Apple and Levi Strauss, to purchase ads this month blasting Abbott’s order. “Discrimination is bad for business,” said a full-page display taken out in the Dallas Morning News.

Further, Ohio-based advocacy group Have a Gay Day has purchased billboards in Texas and 14 other states to support queer people as lawmakers enact anti-LGBTQ+ measures. Designed by transgender artist Rae Senarighi, the signs include messages such as “Be careful who you hate, it could be someone you love.”

The case could set precedent in Texas for same sex couples who were together prior to the Supreme Court legalizing...