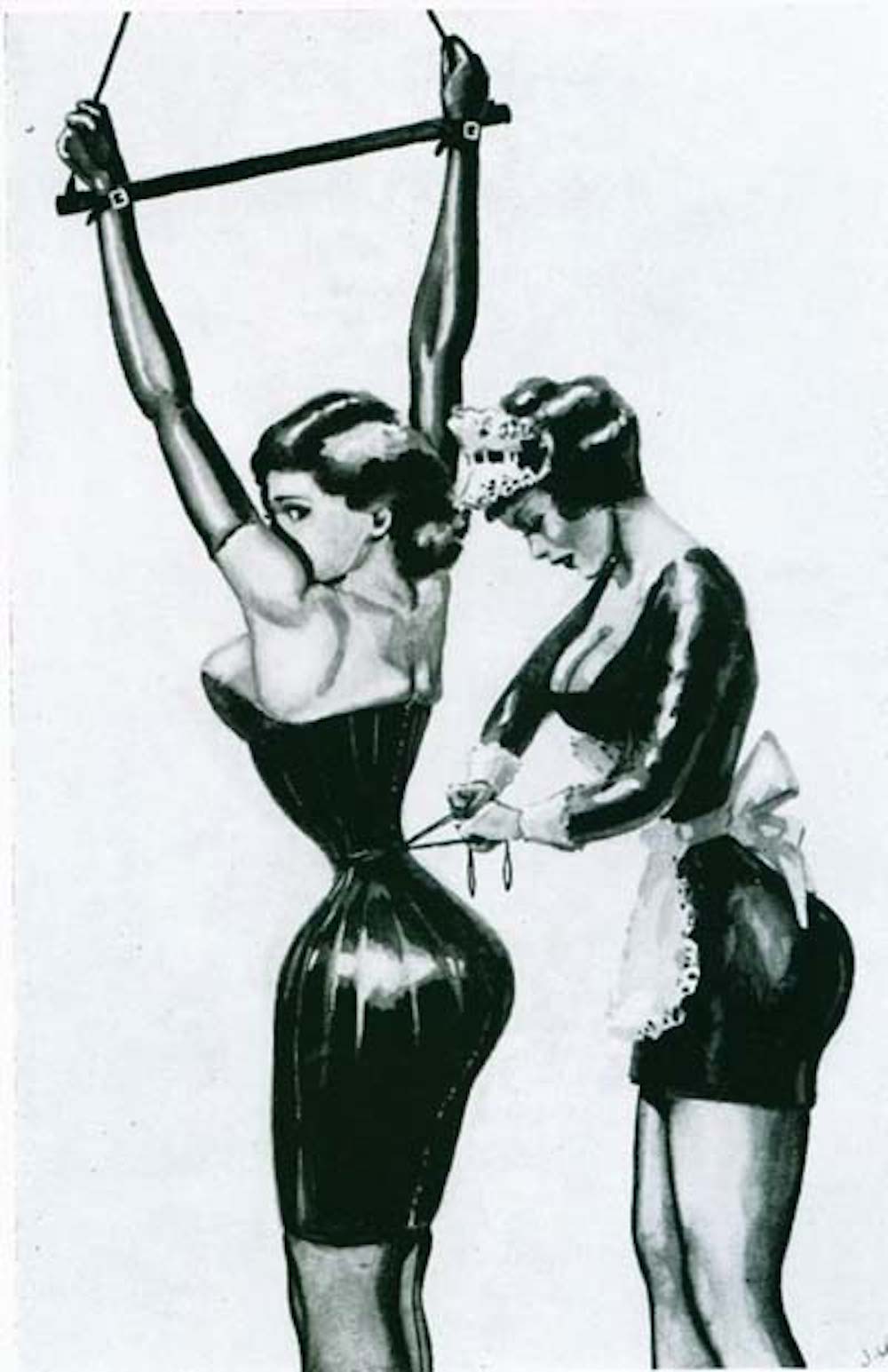 In olden days, a glimpse of stocking/Was looked on as something shocking/
But now, God knows/Anything goes

Cole Porter, seeing the world changing before his eyes, wrote “Anything Goes” in 1934. It felt like a sexual revolution. It wasn’t; humans more or less behave like humans no matter what era you pick. The differences have more to do with technology than morals. Moses, for example, spent a lot of time warning against the sin of violating sheep, because if you’re a lonely sheepherder on a cold night in 1300 B.C., livestock can be a hell of a temptation. On the other hand, somebody has to invent the ATM machine before somebody else can hump it.

Which brings us to John Willie’s classic Bizarre magazine, published during that nostalgic era of closeted normalcy from 1946 to 1959, the favorite period of satirists from John Waters to David Lynch. Willie, an illustrator and photographer, was a friend of the original fetish model Betty Page, showing an intense but benign interest in damsels in distress – bound, gagged, and suitable for framing. Bizarre focused on this subject for the most part. However, from the beginning, readers saw the magazine as an outlet for their own specific fetishes, and Willie was good-natured and accepting of all of it. Looking back on the letters now, it’s amazing how sane and reasonable both the letter-writers are (in sharing their interests) and Willie is in his responses. Straight, gay, and everywhere in between, Bizarre served as a literary port of call, taking all comers. So to speak. The letters range from being missives for a personal column to detailed fantasies to pleas for more of whatever fetish the writer desires. A letter writer calling herself E.V.E. writes, for example, “My one desire is to meet such a man. One who will make me his helpless prisoner and humiliate me in every way. When, when, WHEN! will men realize that even if we are pretty, and feminine, all of us do not want to be treated like helpless dolls unless we are rendered helpless. Do NOT bring flowers, bring cords instead with which to bind us. Do NOT beseech our favours on bended knee but make us crawl to you to do your bidding.” I suppose one has to respect the desire of a woman to demand more chains, not fewer, on feminist grounds.

Similarly, Willie heard from women who had their husbands happily locked up on a daily basis: “If he wishes to marry me, then he must be trained as my slave to wait on me, and serve my purpose. He knows this, and that there will be no let up on my part. I would mention that I keep him on a collar and lead at times to remind him of his lowly position – a position all men should be made to adopt.” Signed Norah Clark, Slave Mistress. Indeed.

Some of the letters are emboldened enough to question societal restraints. One particular letter, from a certain Hank B., serves as a model. Hank questions the foundations of sexual separation. “There is a fear among men,” he writes, “and women, that they are committing a crime, because the law says something about prohibition in regard to wearing the clothes of the opposite sex. But what is ‘clothes or robes of the opposite sex’? Which sex wore these articles of clothing first? If men wore corsets and high heels first and chivalrously gave them up to the female sex, did they lose all identity as male garments?” Now, as it turns out, Hank’s lawyerly observations will rest on the point that he can make a strong account of himself although he loves to wear “corsets, heels and silks” – and more power to him. His letter is a reminder that nearly all gender distinctions – especially in fashion – are social and arbitrary, not handed down from on high. Since we’re still struggling with this issue now, we have to give Hank some points for working this out for himself in 1946. In the letters to Bizarre we find passionate treatises on the wearing of rubber costumes, the delights of bloomers and their delicate touch on the skin, of incredibly high heels, and a number of letters from men who have found their wives well-adjusted to their habits. “At first the girl I married got quite a surprise from my addiction, but now she takes it as a matter of course that my bureau has just as many dainty and filmy pieces of lingerie as hers,” writes Leslie R. Right on, Leslie.

It comes as a surprise that reading this large collection of kinky correspondence is actually rather sweet. We all know that for people with other than heteronormative desires, life in the closet is mostly a life of pain. The idea that these folks were able to find a way to express themselves in this forum seems a very fine thing. And it also can lead to much amusing speculation about what exactly Ozzie and Harriet were up to during the commercial breaks.

If you can find it, this collection of John Willie’s Bizarre is well worth reading. The books themselves are beautifully reproduced, and the content is both funny and surprisingly literate. It seems that in the late 40s and 50s, unlike today, kinky people could write. Which makes the collection as a whole a record of the declining literacy of the American perv. Now that, alas, distresses me.

Joseph E. Green is an author, political researcher, and playwright. He is a writer and producer on the upcoming documentary KING KILL 63, featuring Oliver Stone, Richard Belzer, and Dick Gregory. His latest book, DISSENTING VIEWS II, can be found at www.dissentingviews.com.

In a 7-2 vote, San Antonio’s City Council amended its vehicle-for-hire laws to include regulations for transportation network companies (TNCs)...