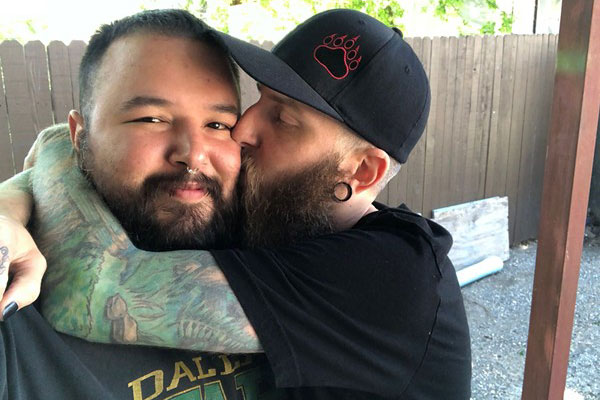 It’s Sunday and I’m driving around getting ready for the second Queers & Beers – a live music showcase I started a year prior featuring San Antonio musicians that identify with the LGBTQ community. All day I had been listening to news of the Pulse nightclub shooting in Orlando.

Before I’m able to walk into the store after pulling into the parking lot of what’s most likely the last Radioshack in San Antonio, I begin to cry.

I mean sob. Like that heavy, soul-aching, pit-of-your-stomach — like you’re birthing a new emotion — kind of crying.

I’m absolutely distraught and I want to cancel the show, but I know, now more than ever, my community needs a place to gather, and I need my community.

And it’s not like I haven’t familiarized with the sort of oppression we queers have endured. I remember the news about Matthew Shepard after he was tortured, tied to a fence and left to die in Wyoming in 1998 on top of the endless accounts of violence and murder of LGBTQ folk who never even make the news.

Growing up in the ’90s (I’m 31), it wasn’t cool to be queer … yet. Will & Grace would premiere in my eighth grade year, helping to destroy the stigma about our community, however, drag queens weren’t viewed as fashion icons yet, and being gay was often quickly associated with AIDS and death.

This is what they taught us growing up.

Sitting in the car, listening to news anchors read transcribed text messages from victims texting their parents and loved ones asking them to pray and saying goodbye, I thought about how the victims were just going out to be in an environment where they felt safe; where they could be themselves without the fear of being attacked for showing PDA toward the same sex. Where they could drink, dance, and maybe forget for a few hours, that this world wasn’t built for us.

Today, June 12, 2018 marks the second anniversary of that horrific event, which would be the deadliest mass shooting in U.S. history until the following October, when a shooter opened fire on Las Vegas concert-goers.

I thought about how any of the folks killed at Pulse could have been a close friend of mine or a family member. Someone who might have helped me come out in my early teens and walked me through my own internalized homophobia, like every LGBTQ person has to go through to in order to live free from the shame.

When you’ve been conditioned your whole life to believe there’s something inherently wrong with you because you’re attracted to the same sex, it’s hard to undo that thinking.

This is why Pride exists.

Pride is the other side of shame. It’s the rejection of a belief system used to literally kill and control us, and a celebration of self-love and wholeness.

In 2018, though queerness feels like a trend, late ’80s ball culture, popularized by the documentary Paris Is Burning is pretty much mainstream, drag queens are now fairy (no pun intended) godmothers, and #yass might be the most-used hashtag of the last few years.

While all of this has helped in normalizing queerness, it still feels like a double-edged sword.

As if drag queens, vogueing, and saying “yass, queen, werk” is all we are and have contributed to the world.

And I realize that, of course, not everyone believes that’s all we are, but, a lot of people do.

When I moved to Texas in 2008, I ended up auditioning for a metal band and became their vocalist for a few years. After one of the shows, some bro came up to me and, maybe in attempt to compliment me, said something like “Dude, I didn’t know gay people could scream like that.”

As if he were surprised I wasn’t screaming with a lisp. I didn’t tell him that I was also a rapper and that I skateboarded, for fear of his head exploding and his brains getting in my Topo Chico.

While my queerness is just one facet of who I am, it’s something that I acknowledge, own and appreciate about myself. I’m proud to be a queer, chubby, Xican, rapper, skateboarder, writer, human being — and that journey took decades.

So, straight people, allies, etc., when you see us out here celebrating Pride, remember: It took a long time for some of us to get to a point of celebrating our own freedom. Please respect our spaces, read up on our history, and by all means, buy us a drink.

Pulse Orlando, Queers and Beers, Will and Grace

Organizers at Pride San Antonio have announced an all-star lineup of performers for the Pride Bigger Than Texas Festival on...