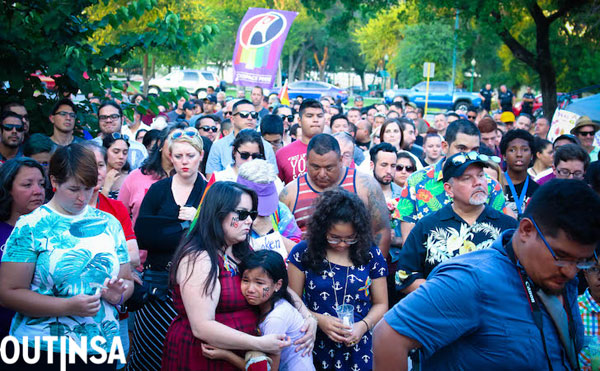 An estimated 1000 people came to Crockett Park on June 16 to participate in a vigil for the victims of the Pulse Orlando shootings. (Photo by Julian P. Ledezma)

A select month-by-month recap of stories about our community reported here and elsewhere in 2016. Robber fires gun at Cobalt Club bartender
In the early morning hours of February 12, an armed robber menaced the customers and bartender at the Cobalt Club, a gay bar north of downtown. Feds send SA trans man to women’s prison
A transgender man from San Antonio was placed in a women’s federal prison even though he legally changed his name and gender marker before his imprisonment. Celvin Anthonie Carrillo, 31, was sentenced last year to serve 46 months in federal prison for conspiracy to transport illegal immigrants. With declining membership, Stonewall Dems contemplate future
For the past decade, the Stonewall Democrats have been a vibrant force within the local Democratic Party and in the LGBT community. At the height of its popularity Stonewall had nearly 200 dues-paying  members. Today, that number has been reduced by more than half with an average meeting often attracting fewer than 40 people.

Two girls turned away from Incarnate Word HS prom
Two girls were denied entrance to the Incarnate Word High School prom on April 16 after being told the school did not not allow same gender dates for the event. Police roust homeless loiterers near Annex Bar
San Antonio police are called almost daily to scatter dozens of homeless people who loiter near the corner of San Pedro Avenue and West Euclid Avenue where the Annex Bar and the Child Advocates of San Antonio are located.

Celebrating 10 years of Ladies on the Loose
Many in the community may recall back to 2006 when the San Antonio chapter of the Human Rights Campaign began hosting a monthly cocktail party for lesbians dubbed Ladies on the Loose, LOL for short. A decade later, those monthly gatherings continue and are a mainstay in the social life of the community. Friends, family mourn Texas victim of Orlando shootings
The family and friends of Frank Hernandez Escalante were shocked and dismayed over his death at the hands of a shooter who killed 49 people at the Pulse dance club in Orlando, Florida on June 12. Escalante, 27, was a native of Weslaco, Texas.

Cornyation raises $200,000 for charities, scholarships
The board of directors of Fiesta Cornyation announced that for the second year in a row they raised a record-breaking $200,000 which they distributed to local charities and college students on June 12. Pride on the Strip Raises $22K for Orlando Victims
Proceeds from a block party held during this year’s Pride festivities, along with donations from local businesses and community members, raised over $22,000 for the Pulse Victim’s Fund for those who died in the Orlando shootings. Benefit concert for Orlando victims at UIW
Over 40 classical musicians participated in an August 13 concert at the University of the Incarnate Word Concert Hall to benefit the victims of the Orlando shootings.

LGBT couples and singles support group started in New Braunfels
A new group, the LGBT L.O.V.E. Support Group, started organizing meetings and events in New Braunfels for singles and for couples who are married, engaged, or in long-term committed relationships. LGBTs surprised by Van De Putte’s endorsement of Taylor
It was a great astonishment to many San Antonio LGBTs when they learned former state Sen. Leticia Van de Putte, long considered an ally, expressed support for Mayor Ivy R. Taylor at a fundraiser on September 7.

Local LGBT activist recognized by state social work group
San Antonio activist Robert Salcido was recognized for his work in the LGBT community by the Texas chapter of the National Association of Social Workers during their annual state conference in Arlington, Texas on October 6. Gunmen kill bouncer at Annex Bar
San Antonio police are searching for a pair of gunmen who shot and killed the bouncer of the Annex Bar on Sunday, October 30.

San Antonio earns 95 on HRC Municipal Equality Index
San Antonio received 95 out of a possible 100 on the nationwide rating system of LGBT inclusion in municipal law and policy. CAUSA, once the force behind NDO advocacy, scales back
The leadership team of CAUSA (Community Alliance for a United San Antonio) announced it will no longer hold regular meetings. Texas man and partner are victims of Berlin terror attack
Richard Ramirez of San Benito, Texas was seriously injured and his partner was killed during the deadly truck attack on a Christmas market in Berlin on Monday, December 19. There’s Work Ahead for LGBT Democrats in SA
By Dan Graney, November 12, 2016
Most of us are still reeling over the unthinkable – a Donald Trump presidency. We are in a state of grief, not so much because the Republicans under Trump will have complete power in Washington but the bigotry which was espoused by Trump and many of his followers has now unveiled itself as never before.

Trans Panic: Coping with a Trump Presidency
By Polly Anna Rocha, November 10, 2016
As a queer transgender women of color, the results of this election have some strong implications for me and those like me. All the conversations on transgender bathroom laws, discriminatory rights of businesses, the denial of basic healthcare for trans people and so on, are going to open up again and again with a president like Trump and a strongly anti-LGBTQ vice president like Mike Pence.

If you're looking for way to ring in 2017, you'll find no better celebration than Pride Center San Antonio's second...