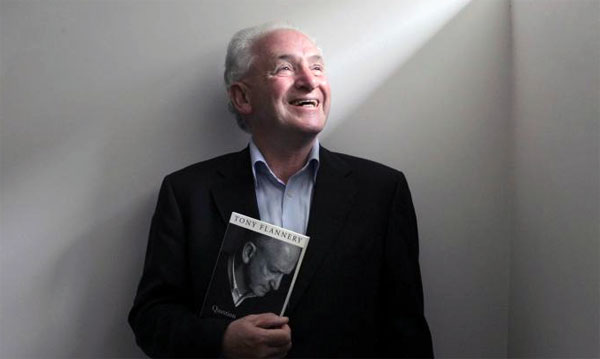 Fr. Tony Flannery of Galway, Ireland will be in San Antonio on Nov. 12 for a presentation sponsored by Dignity San Antonio and the Catholic Tipping Point. (Courtesy photo.)

Dignity San Antonio is sponsoring a talk by a controversial Irish priest and author whose views on homosexuality, contraception, celibacy for priests and other topics have nearly gotten him excommunicated.

The Rev. Tony Flannery of Galway, Ireland is a popular writer and speaker who publicly questioned church doctrine to the point that in 2012 he was forbidden to minister as a priest. He is a member of the Redemptionist order and a founding member of the Association of Catholic Priests in Ireland.

Church officials have for years warned Flannery to tow the line and reaffirm that women cannot be priests and accept Church stances on contraception, homosexuality, and refusal of the sacraments to people who’ve been divorced.

In 2013, Flannery was threatened with excommunication by the church’s Congregation for the Doctrine of the Faith unless he made a clear and public statement fully supporting official church teachings. He refused to sign the document saying it “violates his conscience.”

Flannery has published nine books and is a regular contributor to secular and religious publications. In his book, “Fragments of Reality: Collected Writings,” published in 2009 during the reign of Pope Benedict XVI, he addresses the church’s vilification of LGBT people:

I honestly do not think it is either fair or realistic to expect all people of a homosexual orientation to remain celibate all their lives, and to refrain from any form of physical sexual expression. When this is made a condition for their belonging to the church, it is no wonder that so many walk sadly away. In the present regime, the church has taken an increasingly hard line on this.

His latest book, “A Question of Conscience,” is an account of his dealings with the Vatican and the lengths the Holy See will go to in order to stamp out dissent within the ranks.

According to the organizers of Flannery’s book tour, “After a year during which he attempted to come to some accommodation with the Vatican without success, he has decided to take a public stance on the need for reform in the Church.”