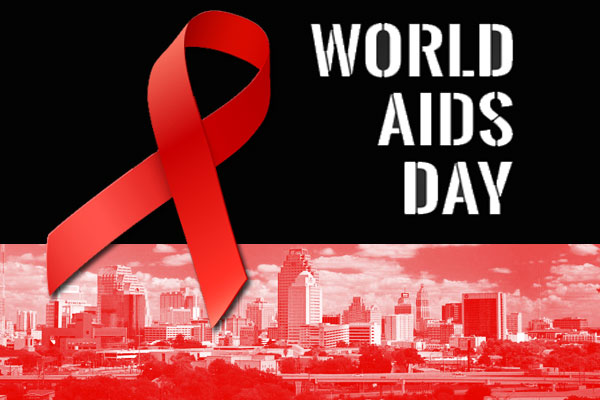 San Antonians will be among the millions of people around the globe who will be observing World AIDS Day on December 1.

The observance, which was started in 1988, is billed as an opportunity for people worldwide to unite in the fight against HIV, to show support for people living with HIV, and to commemorate those who have died from an AIDS-related illness.

The U.S. government’s theme for World AIDS Day 2017 is “Increasing Impact through Transparency, Accountability, and Partnerships.”

Globally, there are an estimated 36.7 million people who have the virus. More than 35 million people have died of AIDS, making it one of the most destructive pandemics in history.

According to Metro Health, approximately 6,000 people are living with HIV in Bexar County. Nearly 10,000 have been diagnosed since the beginning of the epidemic in the early 1980s.

Other statistics provided by Metro Health offer a profile of the epidemic in the San Antonio area. Ceremony of Remembrance
The San Antonio AIDS Foundation will host a ceremony of remembrance on December 1 at 10 a.m. at it’s offices at 118 E. Grayson Street. The event, which is billed as a “ceremony which mourns those who have passed from AIDS and honors all people living with HIV/AIDS,” will include a moment of silence, the release of 200 red balloons and a 21-dove salute — the release of 21 “homing” White Rock doves.

World AIDS Day Collaborative Interfaith Gathering
The San Antonio World AIDS Day Collaborative presents an evening of events on December 1 beginning at 5:30 p.m. at Woodlawn Pointe, 702 Donaldson Ave. There will be informational booths and free HIV testing. A service of remembrance and hope begins at 6:30 p.m. with the theme, “We Remember, We Live, We Hope.” The service includes performances by the Live Oak Singers, the Pride of SA Show Band, remarks by guest speakers, and a special dramatic presentation. The evening is hosted by the Live Oak Singers, Unity of San Antonio, BEAT AIDS, Living Church at Woodlawn Pointe, Dignity San Antonio and ACTS HIV Ministry.

World AIDS Day: Free HIV Testing
Project: H.O.T. and UNIFY San Antonio will be at the Sexology Institute, 707 South St. Mary’s, from 7 to 11 p.m. to offer free, rapid HIV testing. Counselors will be available to answer any questions. The San Antonio Sisters of Perpetual Indulgence will be handing out free “pleasure supplies” as well as seeking participants for a fun, interactive art project in front of the Sexology Institute.

Attorney and political activist Fran Watson from Houston has filed her application to be officially placed on the ballot as...