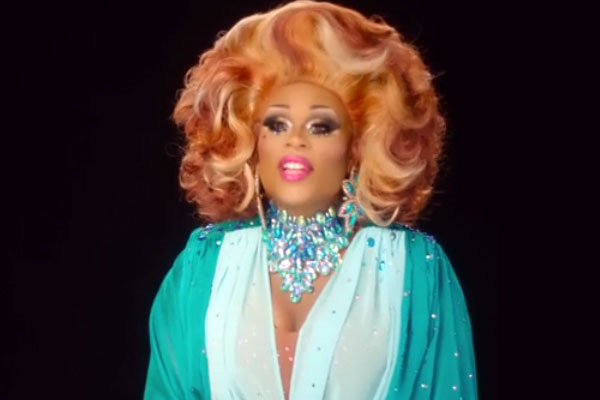 Peppermint, the runner-up of the ninth season of "RuPaul's Drag Race is the Celebrity Grand Marshal of the Pride parade on July 1. (Photo: Logo TV)

Peppermint, the drag queen and songwriter who recently came in as the runner-up on the ninth season of RuPaul’s Drag Race, will be in San Antonio to serve as the Celebrity Grand Marshal of the Pride Bigger Than Texas Parade and to perform at the Pride Festival on July 1.

Peppermint will join the other Grand Marshals of the parade, Mayor Ron Nirenberg and trans youth activists Joe Maldonado of New Jersey, and 18-year-old Mack Beggs of Euless, Texas.

Peppermint, aka Agnes Moore, is the first Drag Race contestant to come out as a transgender woman prior to participating in the competition.

Peppermint, who is a native of Harrisburg, Pennsylvania, got her start in the New York City club scene where she performed at the infamous Tunnel dance club. She also recorded music. Her first big hit, “Servin’ It Up,” was released as a single in 2006. In 2010, she appeared in the Gay.com web series, Queens of Drag: NYC, which also featured Bianca Del Rio, Dallas DuBois, Hedda Lettuce, Lady Bunny, Mimi Imfurst and Sherry Vine. Peppermint and Sherry Vine released a parody of the song “Telephone” by Lady Gaga and Beyoncé, which went viral. This led to more parodies and later to Peppermint’s solo recording of “If I Steal Your Boyfriend” which was featured in the film, Eating Out 5: The Open Weekend.

After the ninth season of Drag Race wrapped, documentary filmmaker Oriel Pe’er announced that his latest feature, Project Peppermint, will highlight the performer’s gender reassignment surgery and her rise to professional success. The film is in the final stages of editing and production.

Despite the glamour and fame she gained as a result of her Drag Race participation, Peppermint says there can also be a downside for many trans people, especially trans women of color.

The entertainment stage for the Pride festival will feature performers and bands throughout the day. At 3:00 p.m., Bidi Bidi Banda, the Selena tribute band from Austin, will perform. Peppermint is slated to take the stage between 4 and 4:30 p.m.

Eclectic by Design: The Unusual Interiors of Gregorio Mannino

When it comes to ambience, what is your favorite local restaurant or bar? Consider the over-the-top Asian market theme of...