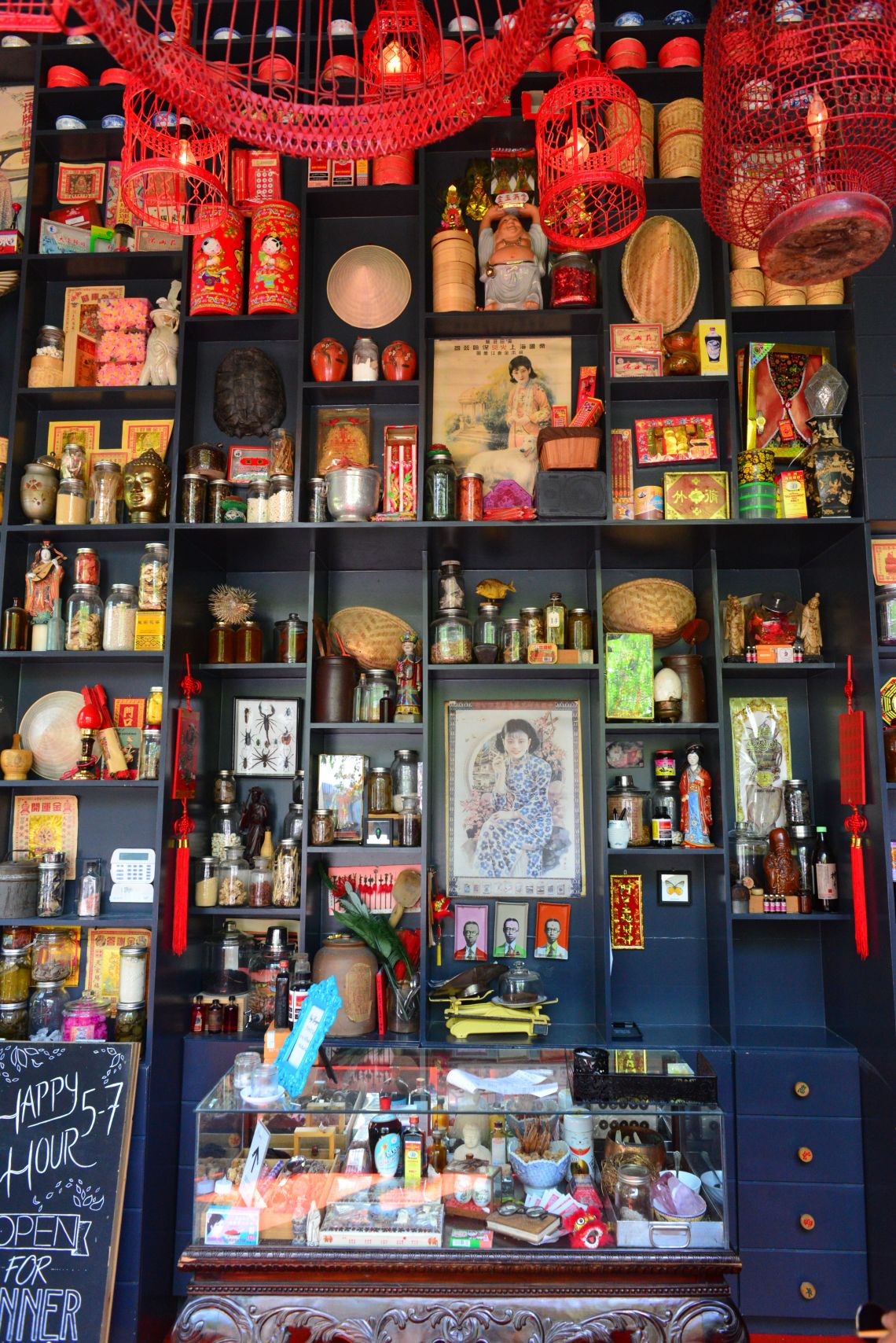 When it comes to ambience, what is your favorite local restaurant or bar? Consider the over-the-top Asian market theme of Hot Joy, or perhaps the Victorian family groove of Barbaro. Then there’s the eclectic and cave-like basement at the Esquire, where myriad mounted fish greet guests after they traverse a darkened hallway paved with Rose Window-like tiles. On the more minimalist side are the rectilinear lines of Chisme, which replaced the kitschy arches of Teka Molino. Across the street, M.C. Escher-esque tiles add geometric complexity to the patterned walls and floors of Rumble. And let’s not forget the Granary or Bakery Lorraine. Take your pick, they’re all a treat to the eye.

Regardless of your choice, they all sprang from the brilliant mind of one person: Gregorio Mannino. As he says, he likes “telling stories with objects, juxtaposed with one another.” Gregorio, or Greg, as he refers to himself, is a self-described “shitty-four” years old. (We’ll leave his age at that.) Yet he exudes a youthful creative fervor. As he says, “I feel like I’m 16 years inside.” He can be seen traversing downtown on his well-traveled scooter, usually without a helmet, because he has a bad habit of forgetting it somewhere. This is a common symptom of a mind focused on other things, like the time he managed to lose his sketchbook in Morocco. A few days later, he was surprised to see one of the postcards from his sketchbook in a woman’s apartment … many miles away in the next city. As for the rest of the sketchbook? The images are probably spread all over Fez to this day. C’est la vie.

As a Navy brat, Mannino moved around a lot as a child, until his parents ultimately settled down in San Antonio. His creativity stems in part from his mother Gwynn Griffith, who boasts an extensive list of credits within the greater world of design. “From the time I was weaned, I was asked to move furniture,” he says, perhaps with a hint of hyperbole. After coming out at the age of 14, he soon found himself part of the local club scene. His favorite haunt was the legendary San Antonio Country — predecessor to the Bonham Exchange — where owner Hap Veltman kept a wary eye on him to make sure he didn’t get into too much trouble. Sadly, the San Antonio Country, which was housed in a Victorian mansion on the banks of the San Antonio River near El Tropicano, was torn down years ago to make way for the AT&T (now CPS) office towers.

Apparently, Hap’s protective nature worked out well. Mannino stayed out of trouble sufficiently enough to be accepted into the Art Institute of Chicago, where he got his education amongst many now-famous people, including members of the Smashing Pumpkins.

Although he is a self-described recluse, it seems that Mannino is well-known within an array of local communities. Staying involved in projects “is my safe place,” he says. However, this not only includes restaurant and bar projects, but also folks in the film and entertainment industries. And then there are the fashion chops, including designing costumes for Cornyation. These gigs are not limited solely to the Alamo City; he is also renowned in New York, Chicago, L.A. and beyond. A freelancer since 1984, Mannino went to New York in 1989 with $10 in his pocket. Over the next decade, he built his reputation there thanks to his passion for eclectic design. Projects in that city have included the Joffrey Ballet and the restaurants Josephina, Memphis and Coastal. Mannino works out of town whenever he can. He is often found toiling away on film projects in L.A., where he has a reputation for playing the most quirky roles when required. If the director needs someone to eat a hot dog off the ground, they put in a call to the prop room and get Greg on the set. “I just do it,” he says, “It all just seems to be different. I like to tell stories, especially in film.”

When it comes to the local art scene, which we all know has its detractors, Mannino is incredibly supportive. He is clear in his declaration that we have a vibrant art community. “It’s committed to history, but it’s also so forward looking, almost futuristic,” he says, “That’s one of the reasons I keep coming back.” He is quick to point out the comparative inward-looking pretentiousness that can occur in places like New York, where he used the example of an art exhibit that was about, ummm, well, shit. In all its glorious forms. “I try to pull in local artists whenever I can.” One example is Jake Zollie Harper, glassblower extraordinaire, who creates the glass shades for his light fixtures. “It’s a real family,” Mannino states, “Everyone takes care of one another.” He often partners with others on his projects, like at Barbaro, where he worked alongside Stacey Hill. He is always quick to give credit to collaborators. However, he did find it challenging to find help when he was designing Hot Joy. While the murals, painted by Kelly Edwards, and the bathrooms are the work of others, Mannino designed all the booths, along with the dizzying assemblage in the front lobby.

Local restaurateur Chad Carey is effusive in his praise of Mannino: “His real talent is a lot of details. He can drill down quickly for the arrangement of things. The details are what are most important about his work.” In reference to his restaurants, he continues, “These places have personality. They feel alive as a result.” Downstairs at The Esquire Tavern

One of Mannino’s recurring design themes is the use of geometric patterns, especially when it comes to wallpaper and tile. It’s particularly notable at Chisme and Rumble. At both locations, tiles cover floors, counters and walls in repeating patters, whether curvilinear or geometric. Mannino likens this design scheme to a visual representation of rhythm.

Mannino’s next project will be a Hot Joy pop-up in Dallas, which is intended to stay open for two to three years. In any case, he stays pretty reclusive. When he isn’t off to another city, you will often find him at home with the company of his two frenetic dogs and The Cat, who, like most smart cats, is disdainful of the dogs. His home is a treasure trove of found objects, from estate sale paintings, to a collection of vintage radios … and just about everything else in between. An eclectic home for an eclectic mind, indeed.

The first time I heard about transgender people, it was the mid-1990s. The Crying Game had been out for nearly...