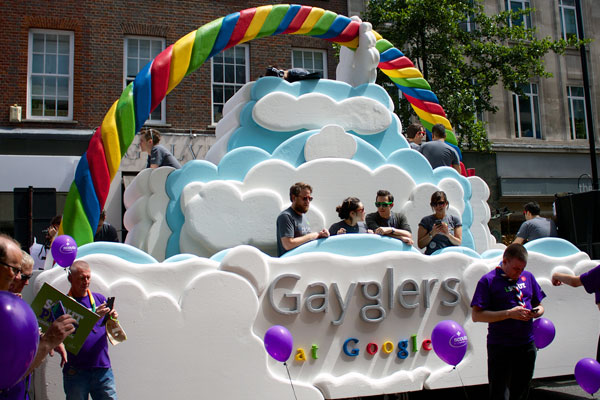 Member of the Gayglers, the Google employees and allies group, with their float for the London Pride Parade. (Photo: Rara)

Equality Texas announced yesterday that it will honor Google with the Vanguard Award at the annual Spirit of Texas Brunch on September 25 at the Rosenberg Sky Room in San Antonio.

The Vanguard Award is given annually “to an exemplary business which has demonstrated a commitment to LGBT equality in the state of Texas through fair employee policy and community advocacy.”

“This year’s recipient, Google has made diversity and inclusion a corporate priority both internally and in the tech industry. Google is the first company to provide full coverage of transgender employees’ healthcare,” Equality Texas said in a press announcement.

Equality Texas stressed Google’s accepting workplace environment. The Gayglers, Google’s LBGT employee and allies group was started in 2006 when the company began to sponsor Pride events and became a float participant in Pride parades around the world. Earlier this month, Equality Texas announced two other award recipients for the Spirit of Texas Brunch.

State Senator Jose R. Rodriguez (D-El Paso) will receive the Advocate Award, which is given to outstanding an public servant whose high ideals include a dedication to equal rights for LGBT Texans.

Phyllis Randolph Frye,  an associate judge for the City of Houston Municipal Courts, will receive the Anchor Award, which is given to an outstanding Texas advocate whose activism on the local level and beyond has proven invaluable to the cause of LGBT equality in Texas.

Team Brigid: How Many Chefs Does It Take to…

No, we’re not talking lightbulbs here, but we are talking about harnessing the lightbulb-like creative moments of a quintet of...