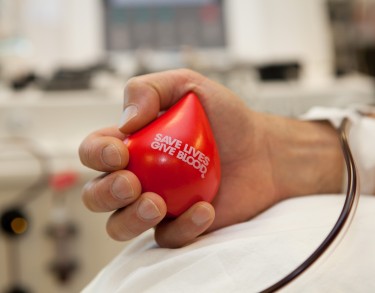 After a year-long discussion, the U.S. Food and Drug Administration (FDA) announced last week it would lift the 32-year-old lifetime ban on gay and bisexual men donating blood. The new regulations allow men who have sex with men (MSM) to donate blood as long as they have abstained from sex for a period of 12 months. Several gay rights advocates have spoken out about the new policy.

After the announcement, Jared Polis, a democratic congressman and co-chair of the Congressional LGBT Equality Caucus told Reuters: “It is ridiculous and counter to the public health that a married gay man in a monogamous relationship can’t give blood, but a promiscuous straight man who has had hundreds of opposite sex partners in the last year can.”

The Human Rights Campaign (HRC) also spoke out against the latest FDA regulations. “This new policy prevents men from donating life-saving blood based solely on their sexual orientation rather than actual risk to the blood supply,” said David Stacy, HRC’s Government Affairs Director. “While it’s a step in the right direction toward an ideal policy that reflects the best scientific research, it still falls far short of a fully acceptable solution because it continues to stigmatize gay and bisexual men. It simply cannot be justified in light of current scientific research and updated blood screening technology. We are committed to working towards an eventual outcome that both minimizes risk to the blood supply and treats gay and bisexual men with the respect they deserve.”

The latest FDA policies put the U.S. in line with other countries around the world, such as Australia, the United Kingdom and New Zealand. Peter Marks, deputy director of FDA’s Center for Biologics Evaluation and Research said during a press conference: “We fully expect that the policy put forward in this guidance will continue to evolve.”

As a trans woman, I would rather someone inquire politely than assume anything about me. Like most users of popular...