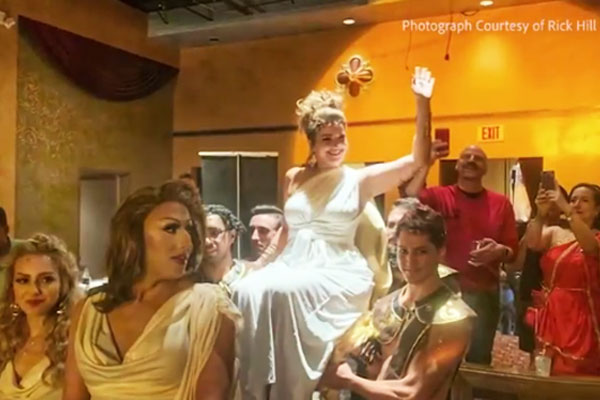 Since its unlikely birth at the Arneson River Theatre during A Night in Old San Antonio back in 1951 — when the first-ever King Anchovy ruled over the “Court of the Cracked Salad Bowl” — Cornyation has proven itself as many things: a riotous revue custom-crafted for woke San Antonians, a mighty fundraiser for local HIV/AIDS charities, and an undeniable rite of passage during Fiesta.

Chronicled by San Antonio-based author and professor Amy Stone in her 2017 book Cornyation: San Antonio’s Outrageous Fiesta Tradition, the tawdry spectacle has evolved from a straight-up spoof of the opulence and pageantry of the Coronation of the Queen of the Order of the Alamo to a more broadly informed affair that takes aim at local politics, national headlines and pop-culture phenomenons.

Easily the black sheep of Fiesta, the FOMO-inducing fan favorite returns to test the limits of decency with six performances at the Charlene McCombs Empire Theatre.

Co-emceed by the dynamic duo of Cornyation vets Elaine Wolff and Jesse Mata, the evening promises jabs at everything from shark theft to upcoming elections, not to mention special appearances by soul siren Alyson Alonzo and members of the vogue troupe House of Mizrahi.

Fiesta Cornyation, April 23, 24, 25 at 7 p.m. and 10 p.m. at the Charline McCombs Empire Theatre, 226 N. St. Marys Street. Tickets are available at the Empire/Majestic Box Office and on Ticketmaster.com.

Early voting for the May 4 municipal election begins on Monday, April 2 and ends Tuesday, April 30. This year’s...