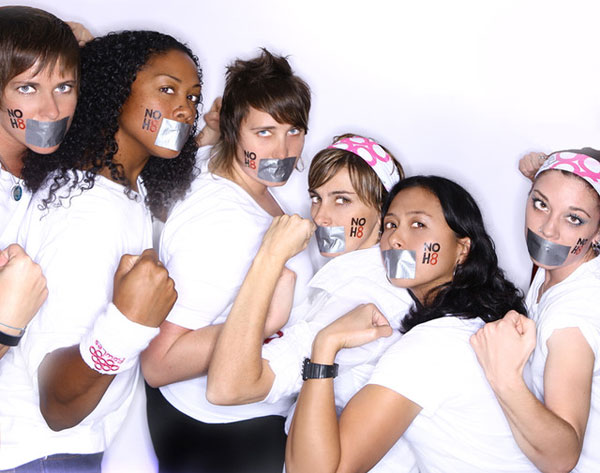 The NoH8 Campaign will be in San Antonio on February 17. (Photos by Adam Bouska)

The NoH8 Campaign will be in San Antonio for the first time on Saturday, February 17 for an open photo shoot at the Woodlawn Pointe Auditorium.

NOH8 is a photographic silent protest created by photographer Adam Bouska and partner Jeff Parshley in direct response to the passage in California of Proposition 8 which banned same sex marriage in 2008.

While inspired by the passage of Prop 8 and the fight for marriage equality, the scope of the NOH8 Campaign has grown to stand against discrimination and bullying of all kinds. Photos feature subjects with duct tape over their mouths, symbolizing their voices being silenced. On its website the campaign explains, “While our work continues here in the US, we must not forget that there are still places around the world where simply being who you are means living in fear for your life every single day. Our mission to promote love, acceptance and respect for all human beings.”

The San Antonio NoH8 shoot, which will take place between 2 and 4 p.m. on February 17, is being hosted by Fiesta Youth and Woodlawn Pointe. The auditorium will be open from 1 to 5 p.m.

Single photos cost $40; couple and group photos are $25 per person. Payments can be made by cash and credit cards only. Fees cover the cost of photography and the cost of producing one edited digital print only and do not include physical prints.

Those wishing to be photographed should come “camera ready” wearing a white shirt and prepared to pose and “make a statement.” Photos will be taken on a first-come, first-served basis. However, all who are in line by the advertised end time will be guaranteed a chance to pose.

Upon arrival, photo subjects will: 1) Fill-out a model release; 2) Have a NOH8 temporary tattoo applied for the photo; 3) Standby for their number to be called; 4) Process payment once called; 5) Trade processed model release for duct tape.

Funds raised by NOH8 will be used to continue promoting and raising awareness for marriage and human equality as well as anti-discrimination and anti-bullying through its interactive social media campaign.

“Fiesta Youth provides weekly programming and partnering with groups like the NOH8 Campaign to foster a society of no hate in our community,” Darrell Garcia Parsons, Fiesta Youth’s board president said in a statement. “We believe San Antonio can be a No Hate community and we are very excited to be co-hosting this campaign to our city.”

A national campaign, dubbed No Gay? No Way!, has been started to urge Amazon not to locate its HQ2 facility...