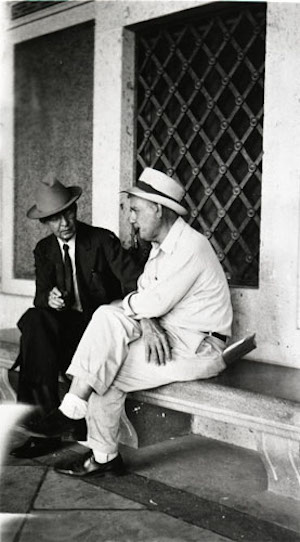 “In the university I am a wild man” J. Frank Dobie wrote this to his wife, adding, “in the wilds I am a scholar and a poet.” Storyteller and Texan J. Frank Dobie spent his entire life walking the line between the wilds of the natural world and academia; he combined these two selves in his prolific writing career. And now, for one night only, you can live like Dobie: wild, hungry for words, and chompin’ on chile con carne.

Head on out to the ghost town grounds of the 1887 Oakville Jailhouse and Town Square, (just an hour-and-a-half south of San Anto!), for a night of campfire cooking and Texas authors reading their favorite Dobie pieces against the landscape that Dobie himself introduced to readers in the 1930s and ’40s. Dobie Dichos celebrates the author that brought Texas folklore to life.

J. Frank Dobie was born in Oakville in 1888; his parents instilled a love of literature that never left him. He taught at UT Austin until 1947 and led the preservation of Texas tales with the Texas Folklore society. His body of work includes A Vaquero of the Brush Country, Coronado’s Children, The Longhorns, Apache Gold & Yaqui Silver, and many others. He was the first Texas storyteller to rise to fame for his work and has inspired generations of authors for this prolific body of writing.

Dinner and performance: $15
Performance only: $10

The San Antonio chapter of the Human Rights Campaign announced on October 25 the selection of Wayne D. Beers and...