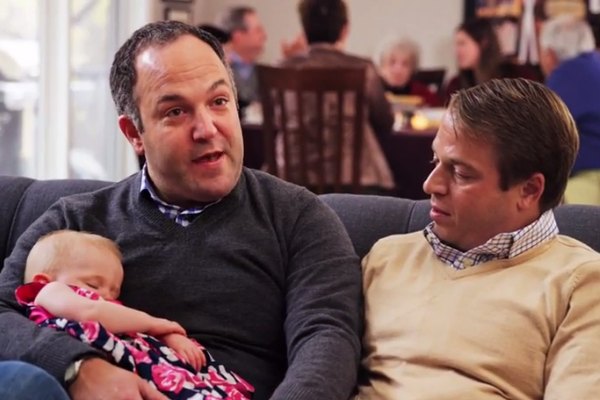 With the Supreme Court’s ruling making same-sex marriage legal in the United States, and the increasing acceptance of the LGBT community into the mainstream, 2015 has certainly been a landmark year for civil rights and advancement. On Sunday, a new ad featuring two gay dads was posted on Allstate Insurance’s Facebook page, perhaps signaling a new era that celebrates diversity and inclusion within the mainstream media. It was only in 2013 when Cheerios featured an interracial couple in one of their ads, causing a backlash of racial remarks that forced the company to disable the comments section on their YouTube channel. Now in 2015, there has been a rise in the number of companies willing to feature gay couples in ads that sell their products and services.

In the two-minute Allstate commercial, gay dads Danny and Andrew are seen in an interview discussing fatherhood and the recent changes in their lives. “Within our lifetime, we have gotten married and had a child,” one father says. “Twenty years ago, that wouldn’t have happened. So my hope is that she does not face the same obstacles that we did. But I’m not wishing her no obstacles. Just ones that will make her equally as strong.”

In October, Campbell’s Soup also featured an ad with two gay dads, spurring the conservative group One Million Moms to issue a boycott. There has been no word yet by One Million Moms on the latest Allstate ad.

For a comprehensive list of ads featuring gay men and women visit AdRespect, a site maintained by GLADD.

With the presidential election less than a year away, a newly-organized LGBT group in San Antonio is supporting Bernie Sanders...