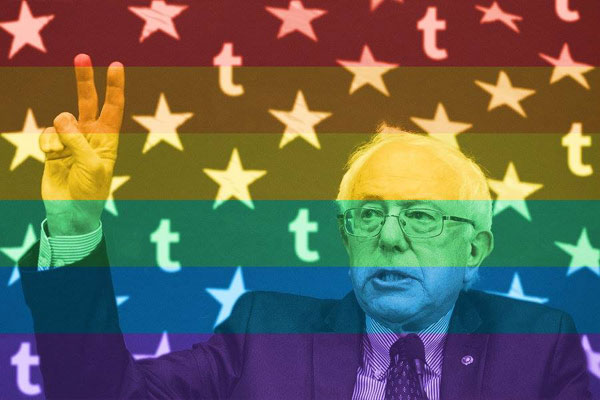 LGBTQIA San Antonio for Bernie Sanders has begun meeting and organizing ahead of next year's presidential election.

With the presidential election less than a year away, a newly-organized LGBT group in San Antonio is supporting Bernie Sanders for the job.

The group, LGBTQIA San Antonio for Bernie Sanders, has had two meetings and about 50 members. Out In SA spoke to Jordan Gregory, the group’s main organizer and spokesperson, about the group’s goals and plans.

How did the local Bernie Sanders group originate?

The page gained supporters within weeks with the help of many on Facebook sharing the page and the first organizing meeting was held on November 19. We just had our second meeting on December 1 with twice as many members in attendance as the first meeting. Our group is made up of volunteers committed to equality for all and who are inspired to talk about the issues that matter most.

Is the group working with the local Bernie Sanders campaign?

How many in the group so far?

We have upwards of 50 people supporting the group right now along with about half who want to get more involved and take action through various volunteer opportunities. Our group is proud to be made up of passionate, inspired supporters who want to see America move forward without any of the negativity we are constantly surrounded by from those across the political spectrum.

From all indications, most people in our community are supporting Hillary  Clinton for president. What makes Sanders a better choice?

This is a question people ask a lot. The simple fact is many are still unaware of Bernie Sander’s consistent support of LGBT rights and equality spanning more than three decades.  In the 1980s, as mayor of Burlington, VT Sanders supported the first Pride parade the town had ever had. Many would not have lent support to gay rights during this time as it was not popular to do so. One thing that makes Bernie Sanders so special is that he doesn’t wait to come around on equality. His views on America are centered on equality. In the 1990s he opposed Don’t Ask, Don’t Tell and the Defense of Marriage Act. As president, he intends to sign the Equality Act, which will expand civil rights protections for sexual orientation and gender identity.

Bernie Sanders is not someone who waits for the time to be right politically to come out in support of those who have had their civil rights denied. His support for the rights of all Americans goes back to the Civil Rights Movement itself. What attracts so many to Bernie Sanders is that he supports equality for all as a human right and doesn’t have to distinguish between one group and another.

Besides LGBT issues, what else should voters consider about Sanders’ record?

Income inequality in this country is at dangerously high levels and will continue to punish the middle-class and those suffering through poverty unless we do something about it.  Bernie Sanders has been the most outspoken candidate in this election on this issue and has real ideas on how to take income inequality head on. His ideas include raising taxes on the millionaires and billionaires and guaranteeing a living wage for all Americans. He understands the need to break up the big banks so that Americans don’t have to pay for the reckless behavior on Wall Street.

Bernie Sanders recognizes that unless we finally tackle the threat of climate change we will be left with a planet that is less safe and unpredictable. That is why he intends to invest heavily in renewable energy and end the United States’ reliance on fossil fuels.

We are still dealing with the problems created by our invasion of Iraq in 2003. The Iraq War has drastically destabilized the Middle East. This happened because of the same bad leadership that kept the United States at war in two countries for more than eight years.  With Bernie Sanders we know what to expect when it comes to foreign policy because we know his record speaks for itself. In 2002 he voted against the invasion of Iraq and has been highly critical of U.S. foreign policy. Sanders does not believe we need to commit even more troops now to countries like Syria and find ourselves in the same mess that we started in.

How does the group plan to get out the vote for Sanders?

We can get the vote out by taking our message directly to the people in the community and telling people about Bernie Sanders. We’re going to have a presence at LGBT events and get more people registered to vote. We have the ability to have a conversation with the people on the issues by signing more up for phone banking. We’re going to get people out for debate watch parties and organizing meetings so they can see that they have someone fighting for them in this election.

This is a unique campaign and it’s a unique election and the voters are going to have to decide how best to solve this country’s problems.  I believe that given the opportunity to get our message out the people in this community will find that Bernie Sanders is the most capable of taking on the biggest challenges we face by bringing about meaningful reforms that will make a difference for Americans all across this nation.

Are you planning any fundraising events?

We don’t have any fundraising events set at this time.  However we are planning debate watch party on December 19. This will give a chance for anyone to come out and support Bernie or just to learn more about the candidate and hear how to get involved in the campaign.

How can anyone who wishes to join the group contact you?

Anyone who wants to join should get on Facebook and search for LGBTQIA San Antonio for Bernie Sanders.  Information on upcoming meetings and events will be posted there.  Organizing meetings are held bi-weekly on Tuesdays with the next one coming up on December 15. Details will be available on the page.  Anyone is free to send the page a message and I will reply as quickly as I can.

Pets in the spotlight at holiday fundraiser

Owners of cats and dogs can get their pet's picture taken with Santa Claus and help a local charity buy...