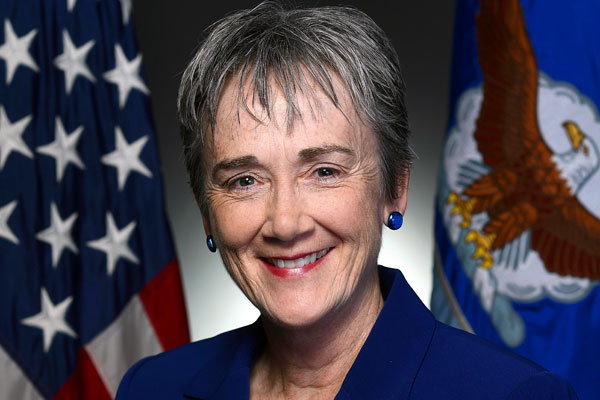 Members of the Texas House LGBTQ Caucus have joined other groups in opposing the appointment of Heather Wilson, the Secretary of the Air Force, as the finalist for president of the University of Texas at El Paso based on her anti-LGBTQ views.

From 1998 to 2009, Wilson served as a congresswoman from New Mexico and maintained a conservative voting record. She was the president of the South Dakota School of Mines and Technology in Rapid City from 2013 to 2017 when President Trump tapped her to be Secretary of the Air Force.

On March 8, Wilson gave Trump notice that she was leaving her job on May 31. Though she is the only finalist for the job, the University of Texas Board of Regents, all of whom were appointed by Republican Governor Greg Abbott and former Governor Rick Perry, must still vote on her selection.

According to GLAAD, Wilson has:

• Said she does not “approve of” homosexuality.

• Attacked an anti-LGBT bullying bill on the basis that teasing is just a part of a child’s life.

• Voted for a federal amendment to the US Constitution banning marriage equality for same-sex couples, going so far as to say she opposed civil unions as well.

• Declared that “marriage — the union of one man and one woman as husband and wife — is the best institution for raising children,” and vowed to “oppose any effort to undermine” this position.

• As member of US House, twice voted against LGBT-inclusive hate crimes legislation.

UTEP LGBTQ student groups and El Paso community activists are stridently opposed to Wilson’s appointment and have organized protests against her.

Cristina Calvillo-Rivera, who graduated from UTEP and helped organize one of the protests, started a petition on Change.org., which as of March 14 had nearly 8,000 signatures.

“For many students and staff, the university is a safe space to become and be freely who they are,” Calvillo-Rivera writes in the petition. “Hiring someone that clearly does not reflect the ability to support that for LGBTQ students is harmful. Moving Heather Wilson as the sole finalist, and potential next president of UTEP, endangers the university’s ability to earnestly act on and serve in the best interests of all students.”

The 20 legislators who are members of the Texas House LGBTQ Caucus concur with the petition’s sentiments.

A statement released on March 14 says, “Our Caucus members have listened closely to the concerns raised regarding the nomination of Secretary Heather Wilson to be the next President of the University of Texas at El Paso . . . Secretary Wilson’s previous comments and voting record against LGBTQ Americans are not only of great concern to Texans, they threaten the sanctity of UTEP’s campus as a place of education.”

The statement goes on to say the Caucus plans to meet with UT System Chancellor James Milliken “to further discuss the implications of selecting a finalist who is not representative of our state’s values.”

A short documentary film about a transgender boy on the wrestling team at Trinity High School in Euless, Texas had...