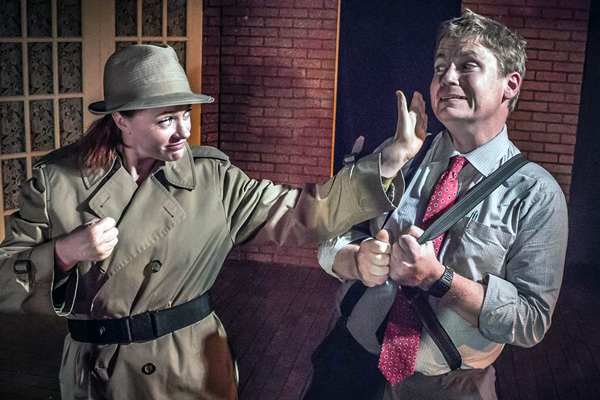 The three part series tells the story of Eric A. Plotz (Guy Schaafs), a vanilla type guy who makes a living creating jigsaw puzzles and lives with his overbearing mother.

Every morning he rises at the same hour and sometimes has Cream of Wheat for dinner. However, his daily routine is interrupted when suddenly there is a 4 million dollar hit on his head and he’s chased through the city by a pair of competing assassins.

The action-packed comedy follows the well-received Ghostbears which was also directed by Karim and premiered back in August at the Overtime Theatre.

Most intriguing about this play is the mother-son dynamic which will leave a smile on your face if not make you laugh out loud. Played here by Lisa Valle, Eric’s mother delivers some of the most awkward yet hilarious lines in a display of unconditional love for her son.

The play also stars Jenny Taylor as the mighty yet sympathetic Hazel who arrives to save Eric’s life.

After its premiere last week, episode one of Generic Eric  will run again this weekend January 27 and 28. Each new episode of the three part series runs for two weeks.

Ivy Taylor Missing from List of ‘Mayors Against LGBT Discrimination’

Nearly 200 mayors from across the country, including four from Texas, have joined a coalition named Mayors Against LGBT Discrimination....