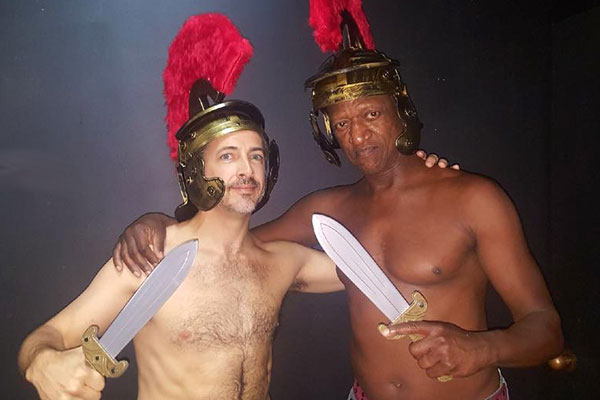 A semi-staged reading of a musical parody that spoofs movies like Spartacus, Butch Cassidy and the Sundance Kid and Brokeback Mountain, among others, will take the stage of the Overtime Gregg Barrios Theater on November 30 and December 1.

The show, dubbed Gladiators in Love, features characters based on Greek deities, Roman courtesans, Daisy Duke, the Marx Brothers, Donald Trump and Dom DeLuise. “No sacred cow is left un-barbecued. No morality code left untrampled. No pompous propped up political position left standing,” according to a press release for the production.

The musical is the brainchild of Mark Leonard, who wrote the book, and Thomas Masinter, who wrote the music. The two previously collaborated on about a half-dozen musicals, the most popular of which, Fire on the Bayou, was directed by Tim Hedgepeth at the Woodlawn Theater. Hedgepeth directs this new production.

“If you think Gladiators in Love is pure comedy genius, please tell your distinguished friends and neighbors,” say the show’s creators. “If you sober up and realize that it is wildly hysterical and low-brow, you might pass that along to everyone else.”