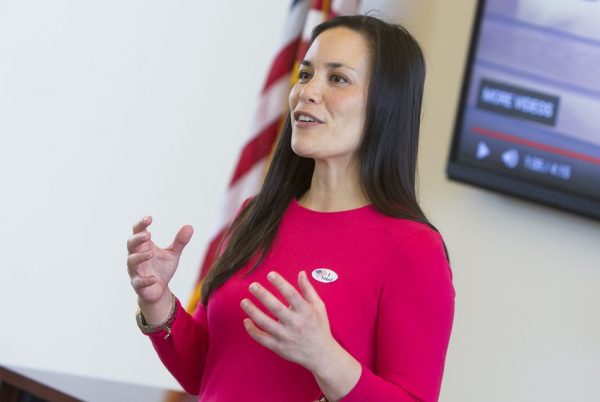 Jones, a former Air Force intelligence officer, launched her long-anticipated 2020 bid Tuesday morning, setting the stage for a rematch in Texas’ most competitive congressional district. In a brief video posted to Twitter, Jones asked supporters to “join us as we finished what we started.”

“Last November, I came up a little bit short in my run for Congress — 926 votes — but I’ve never been one to back down because the promise of our country is worth fighting for,” Jones said. “It’s why I served in the military, deployed to Iraq; it’s why I served in President Obama’s administration and it’s why I’ve dedicated my life to public service — and it’s why I’m stepping up again to run for Texas’ 23rd Congressional District.”

Jones had been expected to make another bid after her razor-thin loss in November, when she declined to concede for nearly two weeks while all outstanding ballots were counted. Within several weeks of accepting defeat, she informed supporters that she was “very likely” to pursue a rematch.

She is the first major candidate to enter the 2020 Democratic primary in the massive 23rd District, which stretches from San Antonio to El Paso and covers hundreds of miles of Texas-Mexico border. The field already includes Liz Wahl, the former U.S. anchor for Russia Today who quit live on air in 2014.

Jones is not the first challenger whom Hurd has faced more than once. After he unseated U.S. Rep. Pete Gallego in 2014, the Democrat ran against Hurd two years later and lost.

Hurd’s campaign alluded to that outcome in responding to Jones’ 2020 candidacy.

“Is it Groundhog Day? Surely the national Democrats know what happened the last time their candidate lost and ran again in TX-23,” Hurd spokesman Justin Hollis said in a statement that also knocked Jones for attending freshman orientation in Washington, D.C., after the November election and before she conceded.

An event to benefit homeless LGBT youth in San Antonio marks the second year where participants are asked to raise...