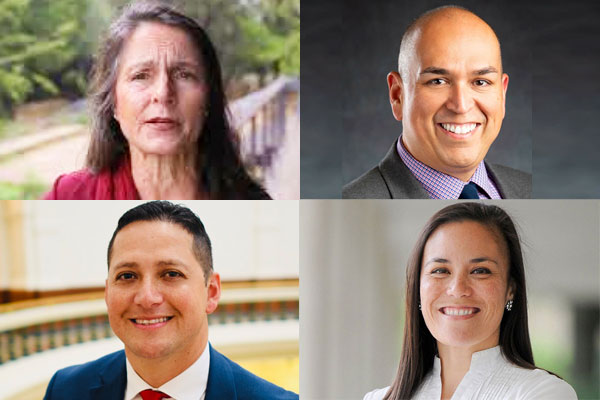 An editorial in the October 29 issue of the San Antonio Express-News points out anti-LGBTQ claims made in two local political races: The first for a seat on the NEISD school board, the other a race for a U.S. House seat.

In the editorial, the newspaper writes, “Let’s be clear: Homophobia has no place in our politics and discourse, and when it arises it has to be condemned in races big and small.” 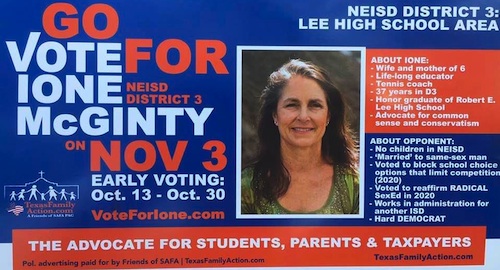 The editorial goes on to chastise the campaign of Ione McGinty, who’s running for in the North East ISD District 3 race. A recent postcard sent to voters by the San Antonio Family Association on McGinty’s behalf, objects to her opponent, Omar Leos, because, among other things, he is “‘Married’ to same-sex man.”

“The flyers are an appalling public attack on Leos, who was appointed last year to replace a resigning member. His marriage is as legitimate as any marriage between a man and a woman,” the editorial says. “The U.S. Supreme Court legalized same-sex marriages across the United States in 2015.”

It goes on to point out that Leos’ education and experience make him more than qualified for the position.

The newspaper says McGinty’s disparagement of Leos would have a negative effect on the district’s LGBTQ students, which it estimates totals approximately 2,650. “The undermining of LGBTQ rights from McGinty and her supporters is potentially damaging to a marginalized young demographic she would be obligated to serve,” the editorial says.

An October 20 interview with the Express-News reports that McGinty, when confronted with criticism of her campaign’s flyer said, “I think that’s ridiculous. I think they’re heterophobic and I think that those remarks are Christian-phobic because they’re not respecting someone that has a different belief.” 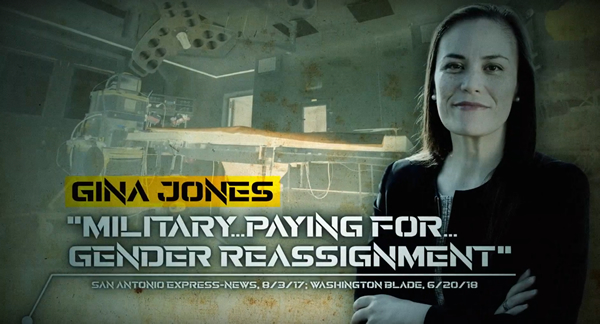 The Express-News also takes to task the campaign of Republican Tony Gonzales, who is running in the race for the Texas District 23 congressional seat against Democrat Gina Ortiz Jones, who is an out lesbian. In a flurry of television ads, Gonzales’ campaign has accused Jones of wanting to divert money from the military’s budget to finance transgender reassignment surgeries.

The claim takes Jones’ words out of context. According to the Washington Blade, at the time Jones’ original comments were made, she was criticizing Republican incumbent Will Hurd for supporting an anti-trans amendment that included healthcare for military servicemembers.

Jones cited Hurd’s hypocrisy on the basis that he claimed to support national security “and then takes votes like that that undermine military readiness.”

“Like Leos, Jones is well-qualified for the office she’s seeking, the Express-News says in the editorial. “During her active-duty service, Jones was deployed to Iraq. Under President Barack Obama, she was the senior adviser for trade enforcement before serving as a director for investment at the Office of the U.S. Trade Representative. Yet her critics are preoccupied with her personal life.”