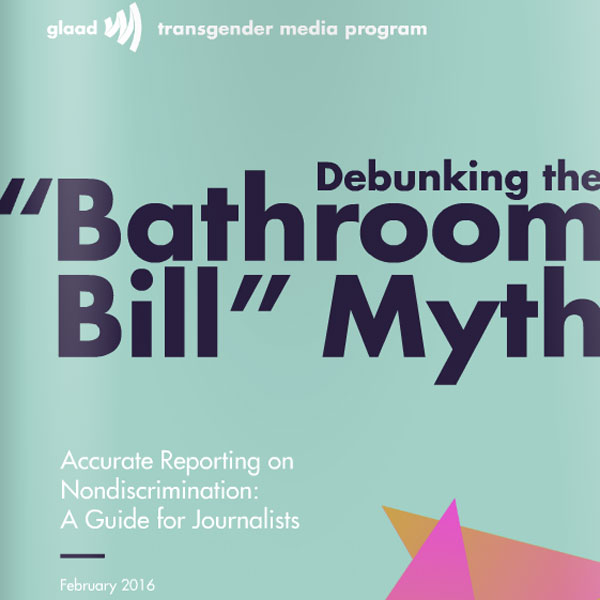 GLAAD has announced the release of a new media guide, Debunking the “Bathroom Bill” Myth – Accurate Reporting on LGBT Nondiscrimination: A Guide for Journalists, intended to ensure fair and accurate reporting of transgender-inclusive city ordinances.

The guide discusses the importance of using proper language, the negative impact of reducing nondiscrimination ordinances to “Bathroom Bills,” and suggests focusing on the fact that such ordinances do not change current laws that prohibit harassment and assault in public spaces.

After the defeat of the Houston Equal Rights Ordinance (HERO) in November of 2015, many in the LGBT community believed voters had been misled by fear-mongering that went reported and unchallenged by media outlets.

Known as the “Bathroom Bill,” HERO was actually a wide ranging city ordinance that would offer protection against discrimination based upon 15 different characteristics including age, race, sex, sexual orientation, and gender identity. Opponents of HERO, however, chose to focus on transgender people being allowed to use the restroom of the gender they identify with, thereby causing  wide spread panic about sexual predators in women’s restroom.

In a press release, Nick Adams, Director of Programs for Transgender Media at GLAAD stated, “It’s imperative that the media fairly and accurately report on the discrimination faced by transgender people and the importance of laws which provide protections for them in housing, employment, and public spaces. Alarmist attempts to frighten voters into rejecting fair treatment for trans people must be challenged by journalists well-armed with the facts.”

Debunking the “Bathroom Bill” Myth comes as the Georgia House is considering its anti-LGBT bill and days after the South Dakota legislature approved a bill targeting transgender students.

Several state and national organizations also contributed to the guide including Equality California, Freedom for All Americans, the Gill Foundation, the Movement Advancement Project (MAP), the National Center for Transgender Equality (NCTE), and the Transgender Law Center (TLC).

“It would possibly behoove me to be more sophisticated as Mia, but I’m just not. I’m an enormous nerd.” Most...