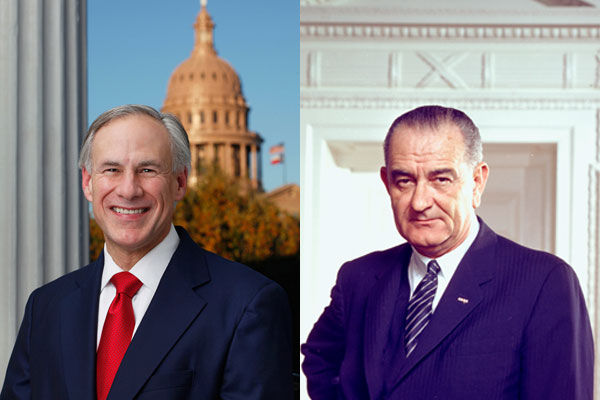 On Monday, May 30, an article in the Washington Post chastised Texas Governor Greg Abbott for his “over the top” efforts to enact restrictive bills aimed at disenfranchising minority voters.

The next day, the Governor responded with a mind-boggling response on Twitter: “We will continue fighting against cheating & illegal voting at the ballot box. Texas won’t return to days of LBJ.”

During his presidency, Lyndon B. Johnson became one of the most important figures in the civil rights movement signing in to law both the Civil Rights Act of 1964 and the Voting Rights Act of 1965.

So, what exactly does Abbott mean when he says Texas will not return to the days of LBJ?

In defense of Abbott, Senator Ted Cruz said in a tweet that the Post’s accusations were “ludicrous,” and that he is proud of Abbott for “protecting the integrity of our elections.” Despite Republican concerns, there exists little evidence that voter fraud is widespread. Since 2011, the GOP leader’s preoccupation with voter fraud and their efforts to thwart it have been viewed as thinly veiled efforts of voter suppression.

In 2013, the Supreme Court gutted a key part of the Voting Rights Act of 1965 which required states with a history of racial discrimination to submit any changes to their voting laws to the Justice Department. Within hours, then Texas Attorney General Abbott announced the state would be moving forward with a new voter I.D. registration law that had previously been struck down twice by a panel of federal judges.

Whether the law will be in effect during the November elections remains to be seen. The Supreme Court has ordered a federal appeals court in New Orleans to render its judgment by July 20.

Abbott’s vow to never return to the days of LBJ is only the latest of many offensive twitter posts seemingly promoting discrimination. Last week, in response to Obama’s transgender directive, the Governor tweeted: “JFK wanted to send a man to the moon. Obama wants to send a man to the women’s restroom. We must get our country back on track.”

Long before LGBTQA was an acronym, there was Shocking Gray. Launched right here in the Alamo City circa 1990, this...