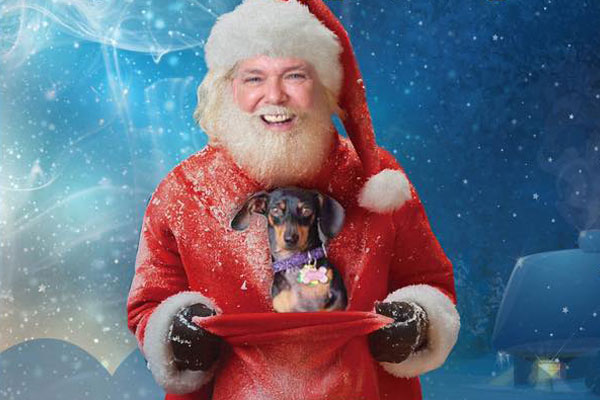 Ron Casola, the Live Oak Singers' founder and first artistic director, dressed as Santa Claus for the poster of the group's holiday concert, "All Wrapped Up," slated for December 10 and 11.

When the Live Oak Singers take the stage for their holiday concert on December 10 and 11 it will represent a bittersweet milestone marking the retirement of the ensemble’s founder and first artistic director Ron Casola.

Casola moved to San Antonio from Phoenix in 2014 to be near his family after being diagnosed with Alzheimer’s. In an interview with Jade Esteban Estrada in the San Antonio Current, Casola made it clear at the time that this his illness was not going to be an impediment to living life to the fullest. “A lot of people think that we’re all crawled up in some corner in diapers at a nursing home,” he told the Current.

“We performed for various local organizations within the first few months with the intention of building bridges between all communities,” the Live Oak website explains. “We had our first concert on December 13th and 14th, 2014 at Madison Square Presbyterian Church, our ‘Twisted Family Holiday’ concert was a smashing success!”

Casola’s musical background includes a Bachelor’s degree in Performance of Voice from  Illinois Wesleyan University. He studied conducting with several musical masters and went on to perform as a soloist with the Phoenix Symphony, the San Diego Opera and the Boston Pops. In 1990, he founded the Phoenix Metropolitan Men’s Chorale. Casola describes the Live Oak Singers as an “LGBT and family” chorale with men and women singing in a traditional soprano, alto, tenor and bass configuration. The group’s programs have been a mix of pop, Broadway tunes and madrigal.

The Live Oak Singers are now under the direction of artistic director Ray Norris. Their holiday concert, “All Wrapped Up,” promises a mix of holiday favorites featuring guest soloist Dr. Rachel Yvonne Cruz and a performance by the San Antonio Chamber Winds.

Casola may be departing but his contributions will not be forgotten by his fellow performers. One unique aspect of the group’s on-stage presentation is Caola’s insistence of what the singers wear at concerts. “This chorus wears all bright, solid polo shirts, bright-colored tennis shoes with khaki slacks and wild socks. Even though we’ll do serious music, I don’t know that we’ll ever wear tuxedos,” he told the Current.

The Live Oak Singers Holiday Concert, “All Wrapped Up,” featuring soloist Dr. Rachel Yvonne Cruz and the San Antonio Chamber Winds. Saturday, December 10, 2016 at 7:30 pm and Sunday, December 11, 2016 at 4:00 pm. at Woodlawn Pointe, 702 Donaldson Ave. Tickets $15. Children aged 6 and younger are free. Tickets can be purchased at this link. A portion of the proceeds will benefit the Alzheimer’s Association.

An excerpt from the Live Oak Singers 2015 holiday concert.

The Alamo Area Resource Center has taken the occasion of World AIDS Day to announce plans to award three fellowships...