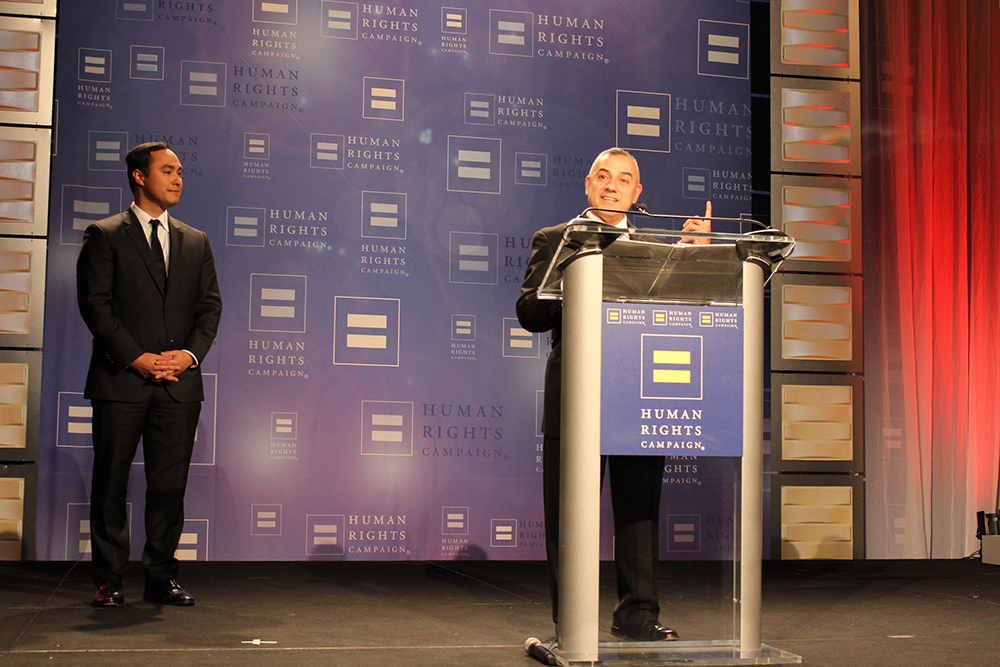 Each year, the Human Rights Campaign of San Antonio recognizes individuals, whether LGBT or an ally of the community, who go above and beyond, personally and professionally, to impact the lives of gays and lesbians throughout the Alamo City and elsewhere.
Important movers-and-shakers, Eric Alva and Judge Genie Wright, were honored in November during the 13th annual HRC San Antonio Gala at the JW Marriott Hill Country Resort and Spa.

In January 2003, Alva’s unit entered Iraq. He stepped on a land mine that left him with a broken left leg; a torn-open, severely nerve-damaged broken right arm; and a badly injured right leg that was later amputated. He had become the first American wounded in the war and, following his return home, the war’s first Purple Heart recipient.

Judge Wright presided over the first Bexar County marriage of a same-sex couple, when the U.S. Supreme Court issued the historic ruling in favor of the freedom to marry in Obergefell v. Hodges, ending marriage discrimination once and for all. Eric Alva photographed by Julián P. Ledezma for Out In SA

Ret. Marine Staff Sgt. Eric Alva remembers the early days of his 13-year military career, when denying who he was became second nature.

“I learned to lie about having a girlfriend back home, to alter pronouns, cover my tracks and make sure I was not being followed going to a gay bar,” Alva said during a recent phone conversation from Houston, where he had been invited to speak at “Discovery Discussions: Dynamic Conversations with Changemakers,” presented by the nonprofit Discovery Green. “You did what you had to do to keep your job.”

In retrospect, Alva probably could not have imagined that one day he would be thrust into the national and international spotlight for being the first soldier to be injured in the Iraq War and the first Purple Heart recipient to come out and become a key advocate for the repeal of “Don’t Ask, Don’t Tell.”

The 44-year-old San Antonio native, who retired from the Marines in 2004, always preferred to live his life in private. That was until 2005, when Texas passed a constitutional ban on same-sex marriage.

“It kicked me in the gut,” Alva recalled. “For someone who served his country on the oath of … to ensure that the people of the United States have equal rights, liberty, freedom and pursuit of happiness, I wasn’t given those rights, and the reality of that began to sink in.”

Having grown dismayed at seeing proponents of the ban on same-sex marriage demonstrate their hatred toward the gay community during rallies, as well as the negative treatment and attitude toward gays in general, Alva decided to join HRC in October 2006. A few months later, he contacted the organization and offered to help in any way he could, not realizing that by doing so his life was about to change.

Several days later, Alva received an email from HRC’s national office, letting him know they were interested in taking him up on his offer. Initially, he thought HRC wanted him to pass out flyers at an event or assist with a membership drive; however, the organization had other plans in mind: They wanted Alva to be their national spokesperson.

“They said we would like you to tell your story and to help with repealing ‘Don’t Ask, Don’t Tell,’” he said. “It also meant no more hiding. They said as the first American injured in the Iraq War you will be known as gay, not only to the country, but to the world.”

Alva quickly faced a dilemma. He knew he had to tell his parents, who had always been his biggest supporters in both his private and professional life. But he wondered how they would react, knowing that when the story broke, most likely they would be affected by their son’s decision too. People often paid them respect because of Alva’s notoriety of having served and been injured in the war. “My mother was apprehensive, but it was because she wanted to protect me, as mothers usually do,” he said. “But I told them it was the right thing to do. I fought for this country, and I needed to help others like me, or shame on me for not doing so.”

So in February 2007, Good Morning America broke the story of Alva being gay and introduced the decorated Marine as a voice for HRC. As expected, interview requests from local and national media outlets, such as USA Today, The New York Times, CNN and The Washington Post, poured in. His story made headlines and hit radio and TV airwaves across the country.

“I did get some hate mail with people saying, ‘You should have died in Iraq,’ but 95 percent of it was from supporters from Israel, Spain, Portugal, Australia and Canada, all over the world,” he said. “It was the beginning of the fight to repeal ‘Don’t Ask, Don’t Tell’ and meeting with people and Congress to convince them that openly gay servicemen and -women are not disruptive to the military.”

On December 22, 2010, Alva stood behind President Barack Obama as he signed the law that would overturn “Don’t Ask, Don’t Tell,” although it wasn’t until September 2011 that it went into effect, allowing gays and lesbians to serve openly in the military.

Darrell Garcia Parsons, who has known Alva since 2004, believes his close friend and former boyfriend is worthy of the HRC recognition.

“He’s sacrificed a lot of time and energy for LGBT equality since coming out,” said Parsons, who is a past member of the National Board of Governors for HRC. “Even before that, he sacrificed himself by serving his country. His story is what captivated a nation to know that the first American injured in the Iraq War is also a gay American.”

Today, Alva serves on the board of Fiesta Youth, an LGBT teen support group, as well as the San Antonio Commission on Veterans Affairs. He also advocates for women’s rights and for people with disabilities.

“I work for people’s lives,” he said.

Once you’ve spent your way through your holiday gift list (including, why not, a couple of things for yourself because...