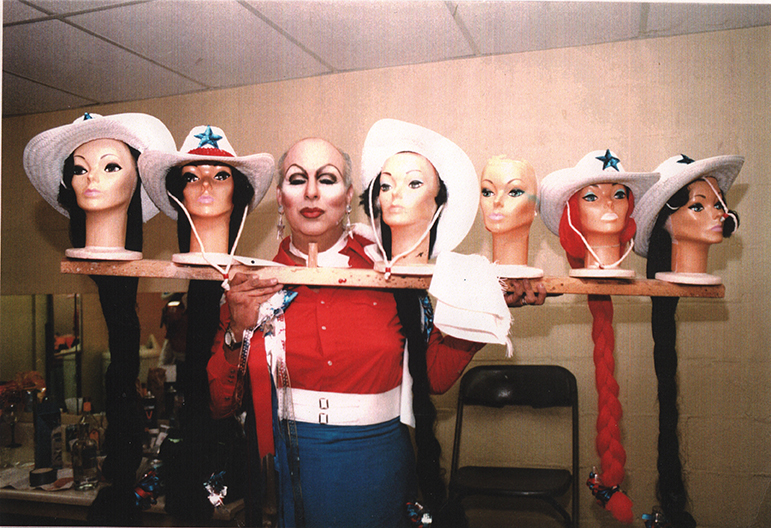 John McBurney backstage at Cornyation in 1998

“We had the courage and the tenacity to be flamboyant and to be ourselves.”

“I’m an old showgirl,” John McBurney says, as he shows me a faded photo of himself in partial drag backstage at Cornyation in 1998.

“I am 6’ 4’’ and almost 300 pounds. I have to be very couture. Very avant-garde. I am not Caitlyn Jenner. And I never did want to look soft. I always knew that I was destined [to go] from the sidewalk to the catwalk.”

There is a 25-year history of Cornyation memories placed before me across the dinner table McBurney shares with Michael Marmontello, his lover of 35 years — photos, programs, costume sketches.

“He’s my lover. He is not my slave,” McBurney says of Marmontello. “Back then, we all used the term ‘lover,’ we never used ‘partner’ like now. Lover.” John sees me raise my eyebrows. I like the word: lover.

“You have to give someone freedom,” McBurney explains. “You have to make your lover your best friend. This is how we looked when we first met,” McBurney says, showing me a photo of himself with Marmontello on an 18-wheeler. Hot. Longtime lovers John McBurney and Michael Marmontello back in the day

McBurney continues: “Now, with drag queens, it’s all about duct tape and glue guns. We didn’t have glue guns back then at Ponderosa … back then, we would go to the drugstore to buy our makeup and there was a little trio of white, brown and blue. The blue went on your eyelids, the brown was a contour, and the white was a highlighter. And then there was only pink lipstick, like for white girls. It was a white-girl pharmacy. Y nostotros Mexicanos doing Lucha Villa.”

Lucha Villa is a luscious Mexican singer and actress.

“We had soul,” he says. “The drag queens were … [knocks on wood two times for emphasis] back then. We had the courage and the tenacity to be flamboyant and to be ourselves.”

And new school is?

McBurney and Marmontello finish one another’s sentences like only lovers can.

“You can get your hips pumped, lips plumped, your forehead done,” McBurney says. “Now people have professional makeup artists, even at Cornyation. And hairstylists that can make the wig look like it’s natural for during the day. New school is money. You can afford MAC [cosmetics]. Coming up with a concept is easy, the fundraising [for Cornyation] can be difficult.”

Ten design teams participate in Cornyation each year. Each team is led by a designer who is responsible for raising funds for costume, set and prop expenses.

McBurney explains: “It’s much easier to fundraise now. Back in the day, we would make crowns out of beer cans and trains out of trash bags. Now it looks like a Fiesta Texas [or] SeaWorld revue. Everyone has tap shoes and makeup and hairstylists.” So what does McBurney use to make costumes now?

“Hot glue and duct tape,” he says. “Glue sticks have gone up in price. Duct tape, too. There’s duct tape in all shades: leopard, zebra, turquoise, stripes, polka dots.” Pointing to a photo of some amazing-looking flamingo costumes, I ask if they’re made out of duct tape. “Yes. Duct-tape flamingos, cardboard boxes and wire. I did those like backpacks. The wings were cardboard. These are baseball caps with duct-tape. Have you seen those young girls who make their prom dresses out of duct tape, with a matching suit for the guy? Fierce. Flawless.”

“The funny thing is: I don’t sew,” McBurney says with a laugh. “I don’t have a sewing machine. When I won, of course, I was ecstatic. I asked, ‘Why did I win? I don’t even sew.’ And they said everyone else sent little bolero jackets, little evening gowns. They said even though you sew with duct tape, you sew with wire, you sew with glue sticks — your stuff is very very creative. You hold it together with your imagination.”

McBurney is modest. He is a professional makeup artist with years of experience.

“I can draw, but I draw like a third grader,” he claims. “I literally do stick people. But I can tell you: This is where the train’s gonna be; this is where the crown’s gonna be. Here’s your fur. These are ruffles. People like Robert Rehm, who used to do Cornyation with us, they would transform my ideas.” Rehm, who died in 2015 at the age of 61, was a big influence on McBurney’s design work. In 2006, Cornyation established the Robert Rehm Scholarship to support college students studying theater arts.

“Robert talked me into doing Cornyation,” McBurney explains. “He was a master genius … and had a heart full of laughter. Always laughing.”

“He was crazy-smart,” McBurney continues. “But the reason Mike and I really enjoy doing Cornyation is because it is a fundraiser for the San Antonio AIDS Foundation. It’s our way of sharing and helping our brothers and sisters who are affected by HIV.” “Lisa Suarez was our Lasso Queen in 1998,” McBurney explains. “We made her a piñata horse, like for the Jefferson [High School] Mustangs. She stole the show. We were outside Beethoven Hall taking our panoramic picture when a trolley stopped. Out come these eight gorgeous Russian sailors in uniform. They took a picture with us.”

The sailors look good, no denying. I marvel at how happy everyone is.

“At Cornyation we’re known as The Multiples,” Marmontello says. “Because of John’s background in makeup and design, he can make multiples of a look.”

“We were the Court of Fast Food Services,” McBurney says. “Giant roaches coming out of a cheeseburger. Kristen Nelson was my Queen that year … This year we’re doing El Chapo Guzmán with Kate del Castillo and Sean Penn. Chapo was funding her tequila. So we’ll have Chapo come out from a tunnel or jail cell, then we’ll have multiple El Chapos dancing with the same shirt and giant joints. When she comes out, she’s going to dance to Pee-wee Herman’s ‘Tequila.’”

Note: Our thoughts and prayers are with John McBurney, whose lover Michael Marmontello passed away on April 13. McBurney was by his side. A celebration of Marmontello’s life is planned for June. Lovers forever c/s. McBurney and Marmontello at San Pedro Springs Park circa 1983

A group of LGBT activists from Texas' Rio Grande Valley are planning to march on April 17 through downtown Brownsville...