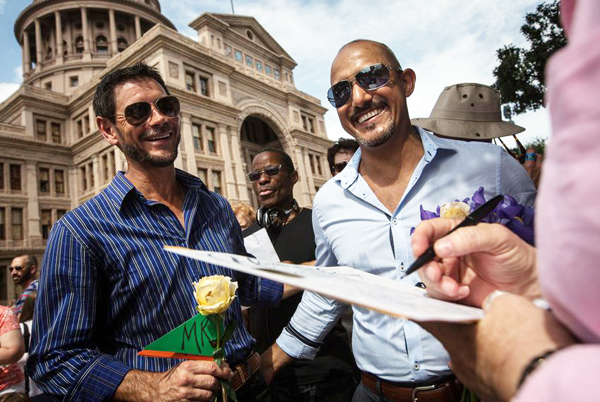 A newly elected Democratic judge issued the decision in the latest turn of a 2013 legal challenge to Houston’s policy extending benefits to municipal employees’ same-sex spouses.

A Houston judge has thrown out the six-year-old lawsuit a pair of Houston taxpayers filed to keep the city from paying spousal benefits to the same-sex spouses of municipal employees. But the long-running legal saga is long from over, according to the side that was handed a loss this week.

The lawsuit dates back to 2013, when pastor Jack Pidgeon and accountant Larry Hicks sued the city to end the policy. In 2015, after the U.S. Supreme Court handed down the landmark Obergefell ruling that opened up marriage rights to same-sex couples in all states, Pidgeon and Hicks continued to pursue the lawsuit, arguing that the decision did not extend to the right to city spousal benefits.

In June 2017, the Texas Supreme Court agreed, ruling unanimously that while same-sex marriage had been made legal, there is still room for state courts to explore the “reach and ramifications” of the landmark Obergefell ruling. The all-Republican high court sent the case back to a Houston trial court for further consideration.

Nearly two years later, Judge Sonya Heath on Monday threw out the case, ruling for Houston in what the city has touted as a major win.

“This is a victory for equality, the law of our nation and human rights,” Houston Mayor Sylvester Turner said in a statement Thursday evening. “I thank our Legal Department for its diligent work defending common sense and fairness, and I’m glad we get to continue the policy established by the city 6 years ago.”

Still, that win won’t go unchallenged. Jared Woodfill, the lawyer who represents Pidgeon and Hicks, said Thursday night that his clients will appeal the ruling — and that he expects the case to land again before the Texas Supreme Court and that it could eventually be decided by the U.S. Supreme Court.

The case is one of the earliest headline rulings from a Houston judiciary that saw a major Republican rout in the 2018 elections. Heath, a Democrat, was elected as part of that sweep — a fact Woodfill highlighted, noting that under a Republican trial judge, his clients’ arguments had won more favor.

But other changes to the country’s judiciary may work to his clients’ advantage, Woodfill suggested, referring to President Donald Trump’s two appointees to the nation’s highest court.

The rainbow crosswalk that was installed last June at the corner of Evergreen and North Main may serve as a...