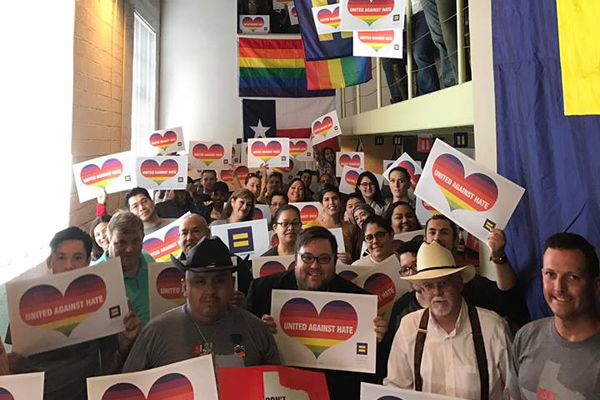 Scores of activists were on hand at the March 5 opening of the HRC field office on 9th Street in San Antonio. (Photo: Facebook/HRC San Antonio)

The Human Rights Campaign officially opened a field office in San Antonio on Sunday, March 5 with scores of activists on hand for the occasion.

The office, located at 315 9th Street in San Antonio, is one of four field offices HRC is opening in the state. The others are located in Austin, Houston and Dallas.

“This is a significant investment that we’ll be making here in the state,” HRC president Chad Griffin told the Texas Tribune in January. “There’s an estimated nearly 800,000 LGBTQ eligible voters in this state … and they are ready to be organized and activated.”

HRC’s plans are to mobilize pro-LGBT forces throughout the state in opposition to Senate Bill 6, which bars transgender people from using the bathroom that matches their gender identity and would prohibit local ordinances from protecting trans citizens from discrimination in public accommodations. The proposed bill incurs criminal and civil consequences for those who do not comply with the law.

The bill, which is the brainchild of Lt. Governor Dan Patrick, faces considerable opposition from trans advocates, civil rights lawyers and business owners who fear the measure could scare business away from the state. Late last year, a study from the Texas Association of Business estimated the state would lose $8.5 billion a year and put at risk up to 185,000 jobs if it passed an anti-trans bill.

“In addition to listening to the business community, Dan Patrick should take the time to get to know transgender Texans and their families,” Griffin told the Tribune. “What he’ll find is that they’re just like everyone else — they’re his neighbors, they’re his fellow congregants at church — and when he gets to know our community it’s going to make it harder and harder for him to hold these hateful views against us.”

This is not the first time HRC has hit the ground over an anti-transgender bill. Last year, the organization sent personnel to North Carolina where a similar bill was passed. In that case, it has cost the state an estimated $630 million in lost business and the loss of seven NCAA championship games.

On its website HRC outlines the fight ahead: “HRC is proud to be in coalition with Equality Texas, ACLU of Texas, the Texas Freedom Network and the Transgender Education Network of Texas to defeat legislation that threatens the rights of LGBTQ Texans and their families. We will continue to be on the ground until the end of the session, engaging HRC members, supporters, and allies to fight back against anti-LGBTQ legislation.”