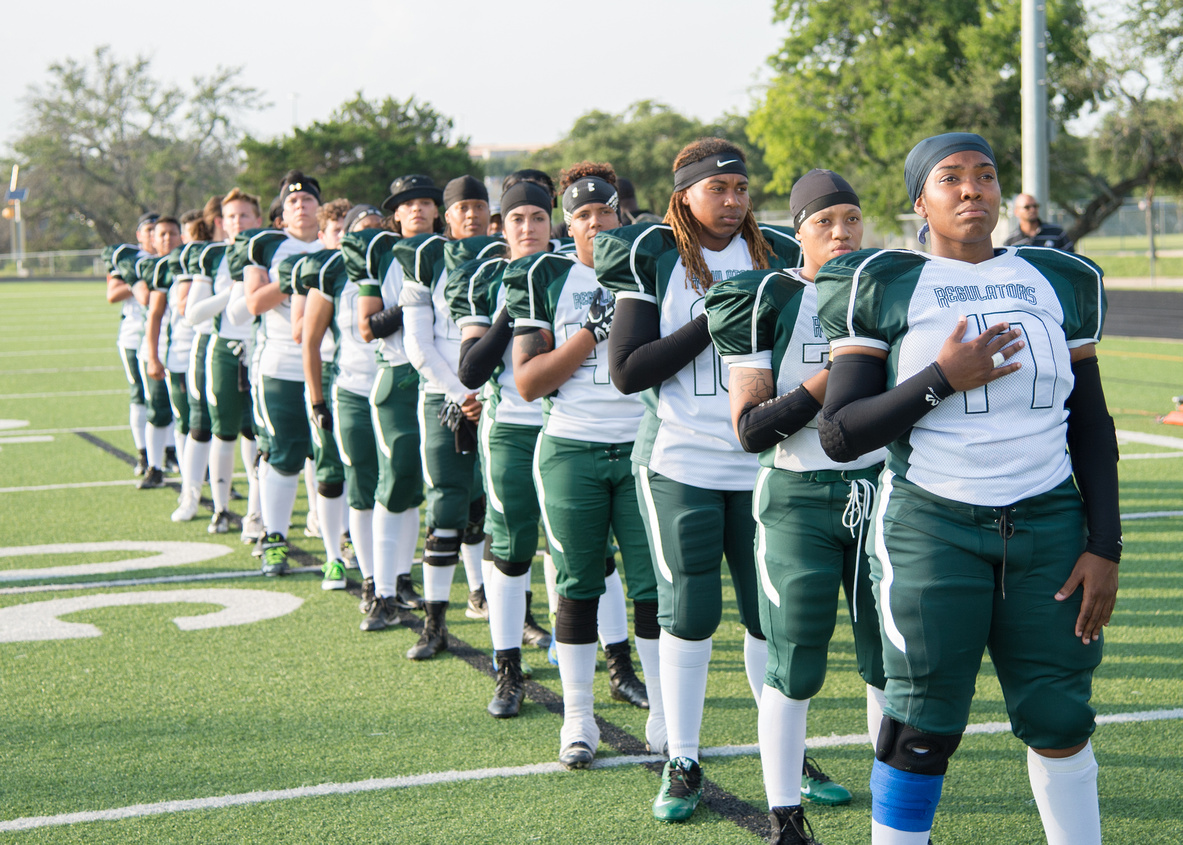 In the shadows of star UCF fighters Miesha Tate and Ronda Rousey still lurks the taboo notion of women expressing themselves through physical contact. The International Women’s Football League (IWFL) struggles to escape that belief. The league was established four years after the WNBA, but has yet to catch its footing under outdated ideals. San Antonio boasts three women’s football teams: the San Antonio Cowgirls of the Sugar N Spice Football League, the semi-pro San Antonio Legacy, and IWFL affiliate conference team San Antonio Regulators.

Out In SA caught up with the Regulators just before their last game of the regular season. Unfortunately, the team was not advancing to the playoffs, but the energy and optimism for the game was through the roof. Since their formation in 2012, the Regulators have seen many ups and downs that include significant injuries, a fluctuating squad and a change in ownership. But the players are relentless and dedicated to the team.

Tara Cook (#10), who has been playing tackle football for 11 years, sees the IWFL as “an opportunity for women to … play a game they have not been able to be a part of.” Cook was lucky to have played the sport she loves as a child, whereas many of her teammates were excluded from tackle football because of their gender and perceived frailty. Physical setbacks, however, are no match for the drive and determination of the players. Take Erica Green, for instance. Despite being on the injured list for two and half seasons due to a broken knee, Green (#25) still shows up for games and practice because the Regulators are family.

Rookie Chelsie Huntley, a mom and nurse by day and #17 by night, was drawn to the culture and climate that owner Patricia François has created for her team.

When François was an enthusiastic fan in the stands, her support for the players involved keeping them in good spirits. Now the Regulators’ owner, her goal is to create a healthy and inclusive environment for women of all ages. 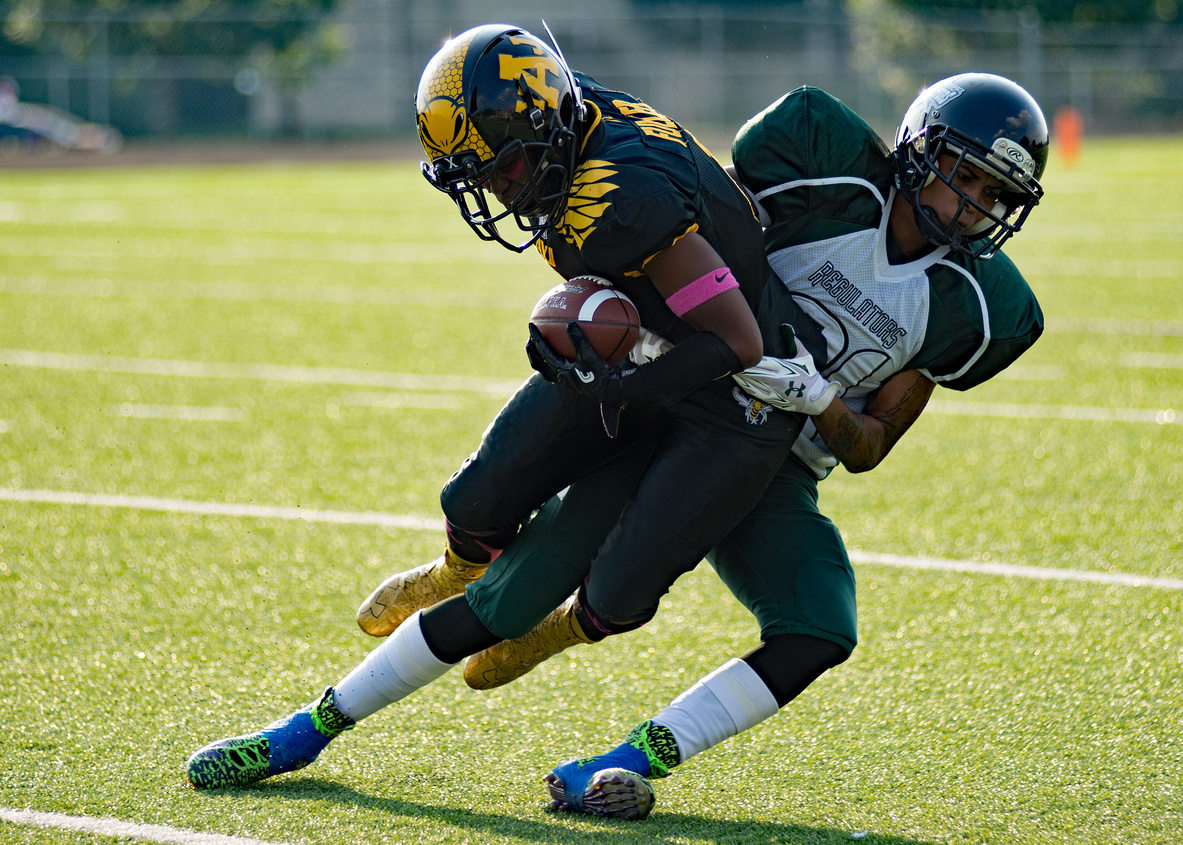 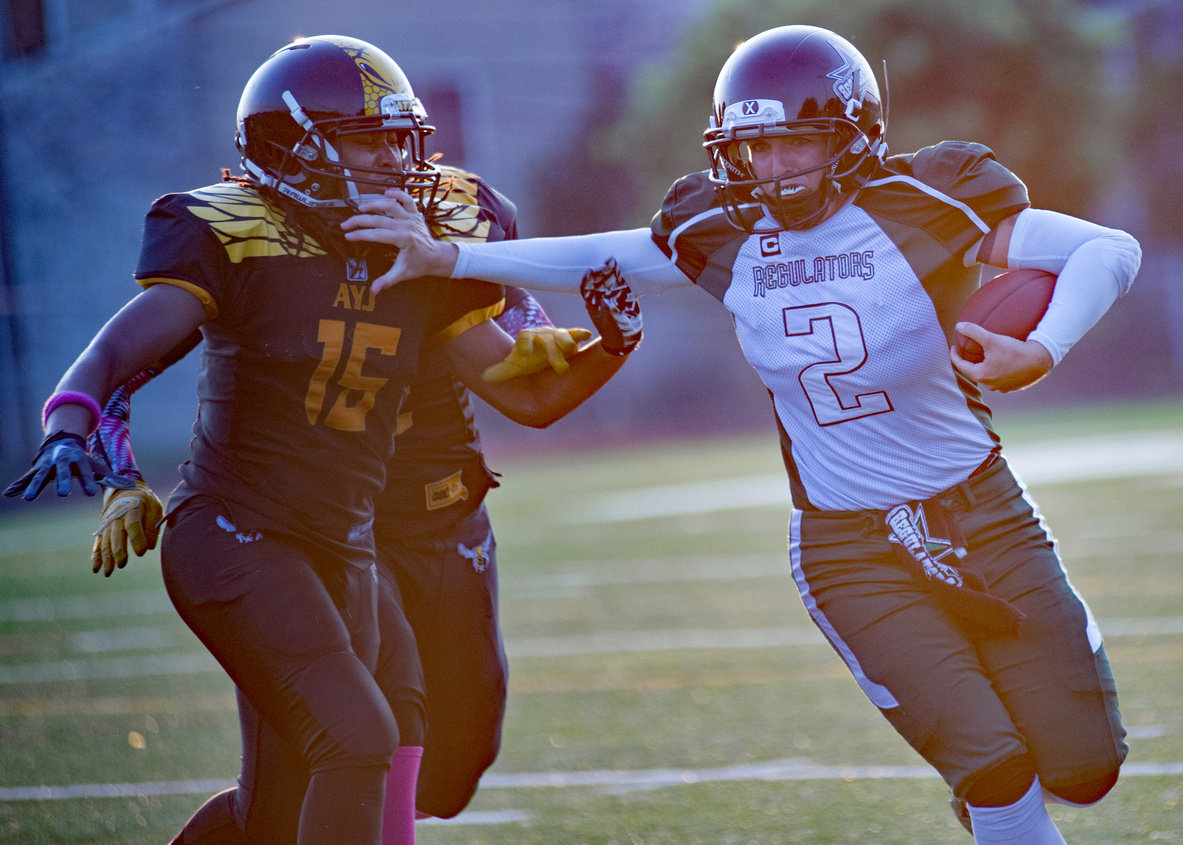 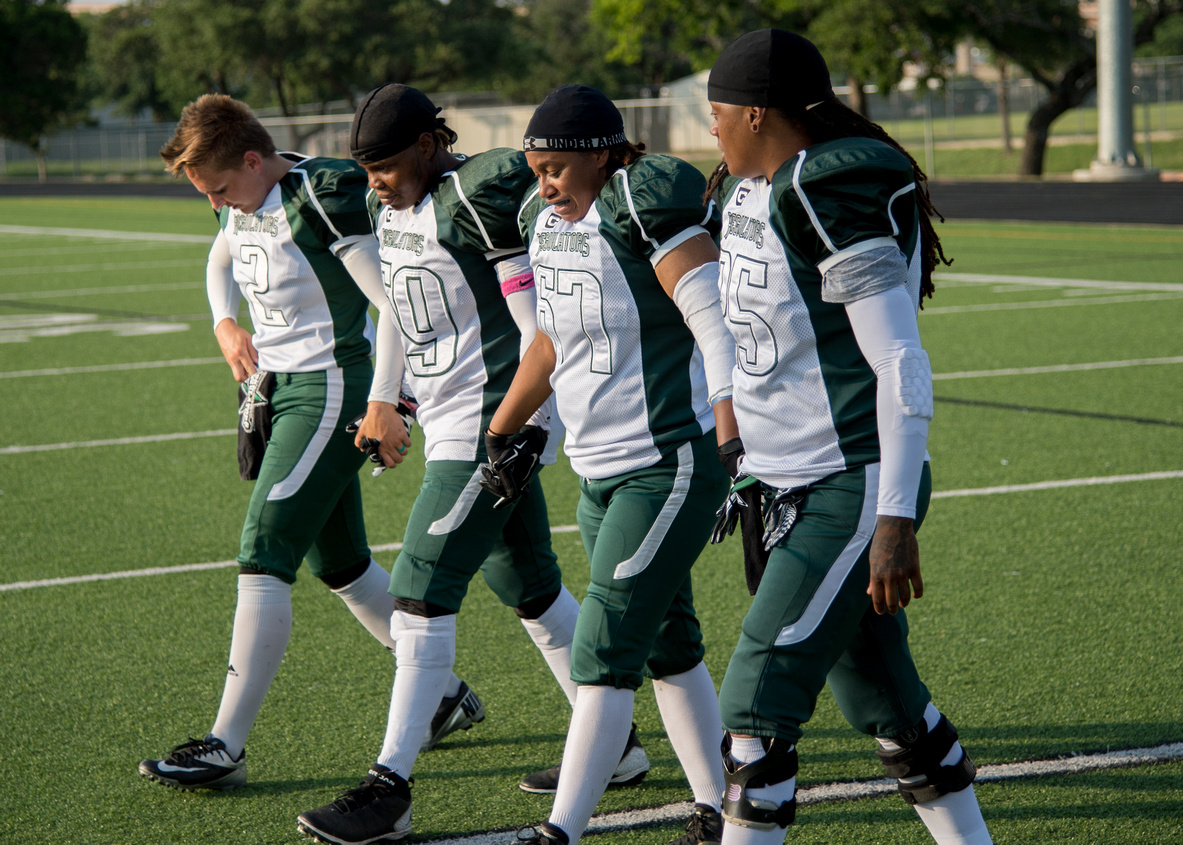 Team captain Tye Ferguson has found a way to thrive because of the Regulators. As an African-American lesbian, Ferguson has been stereotyped her whole life, and felt she needed to be involved in illicit activities to belong. After high school, she spent a lot of time “being rebellious, thugging in the streets and trying to get fast money,” consequently finding herself in places she didn’t want to be. Joining the Regulators has changed her life. With a smile that draws your attention away from her various tattoos, she boasts, “I’ve taken all that negative energy and put it into something positive, which is why I take being out here so seriously.” Her teammate Joanie Chladek asserts that Ferguson’s charismatic leadership style holds the team together. “This is a good place for us to fit in,” Chladek says. “Not all of us are lesbians, but … it’s a comfortable environment regardless if you are gay or straight.”

Ferguson’s energy has even turned an admirer into a player. After watching the team captain play alongside her girlfriend Alana Ferguson (Tye’s sister) for more than a year, 26-year-old Juanishia Felix decided to try out for the team. The former track star says she doesn’t know anything about football but is going to learn.

Sponsored by the San Antonio Orthopedic Group, the team maintains a full staff that includes head coach Charles Richardson, offensive coach Rod Fields, defensive coach Jamar Livingston and athletic trainer Ethan McCoy. Everyone involved is on a mission to make the Regulators a staple sports organization in San Antonio. When they’re not tearing up the field, the team gives back by hosting training camps for local girls, offering empowerment and self-esteem training.

The team’s corner safety for two years now, DC Clark (#12) encourages interested players to join the Regulators family, which encompasses all walks of life — from retired military sergeants to students and corporate leaders.