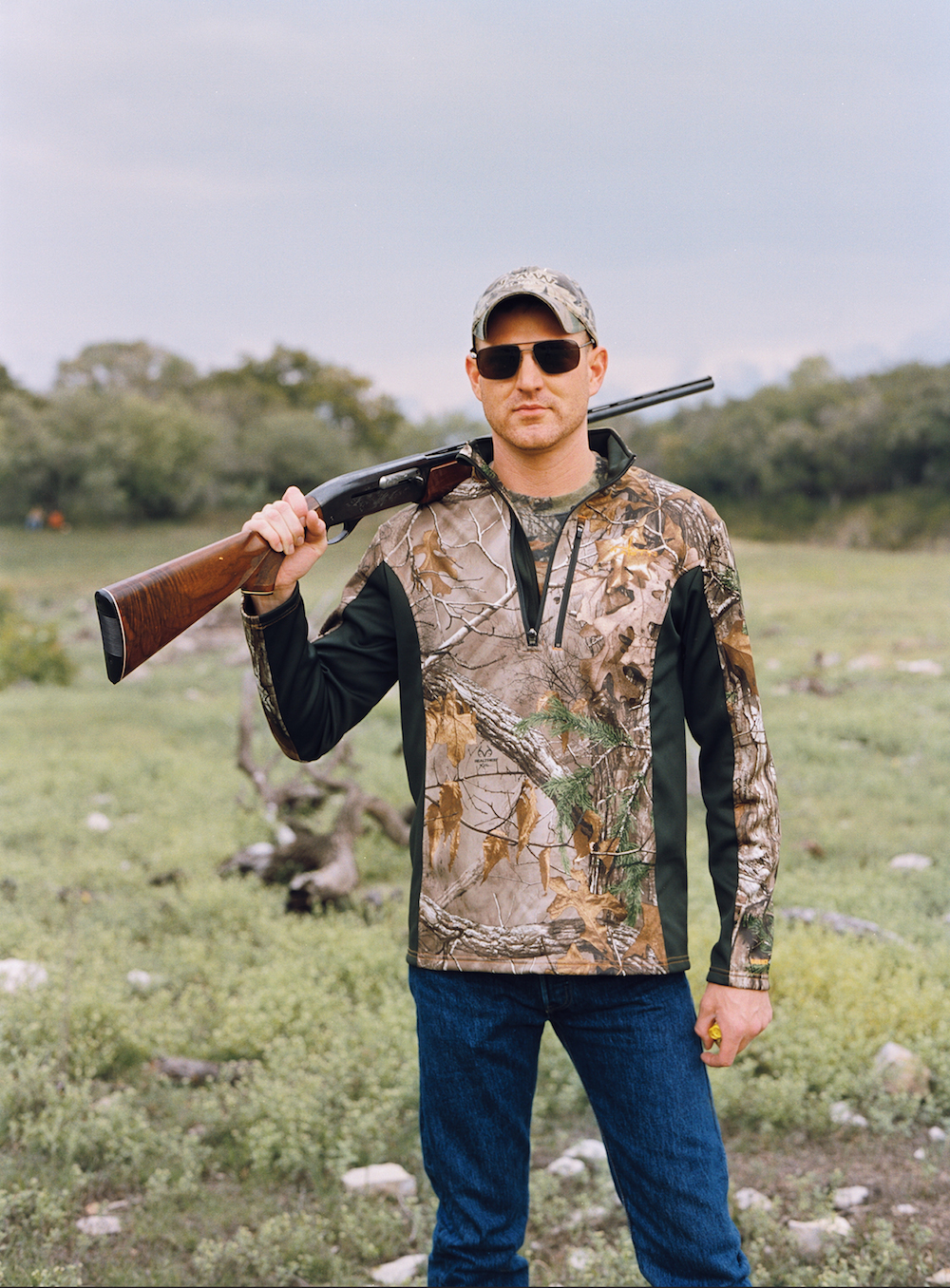 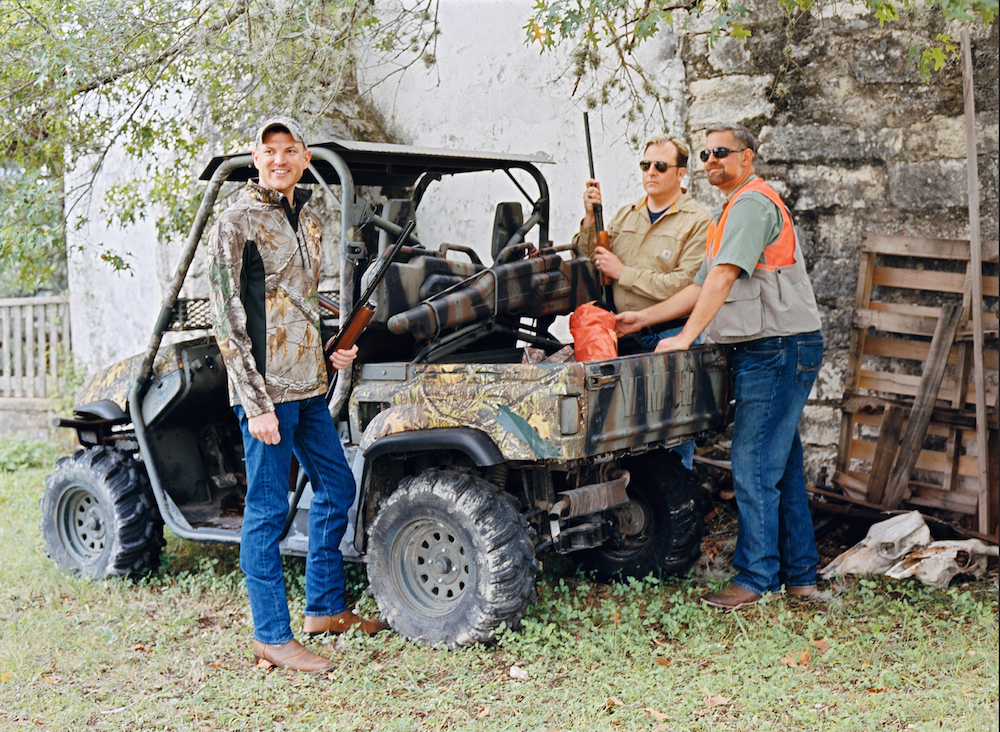 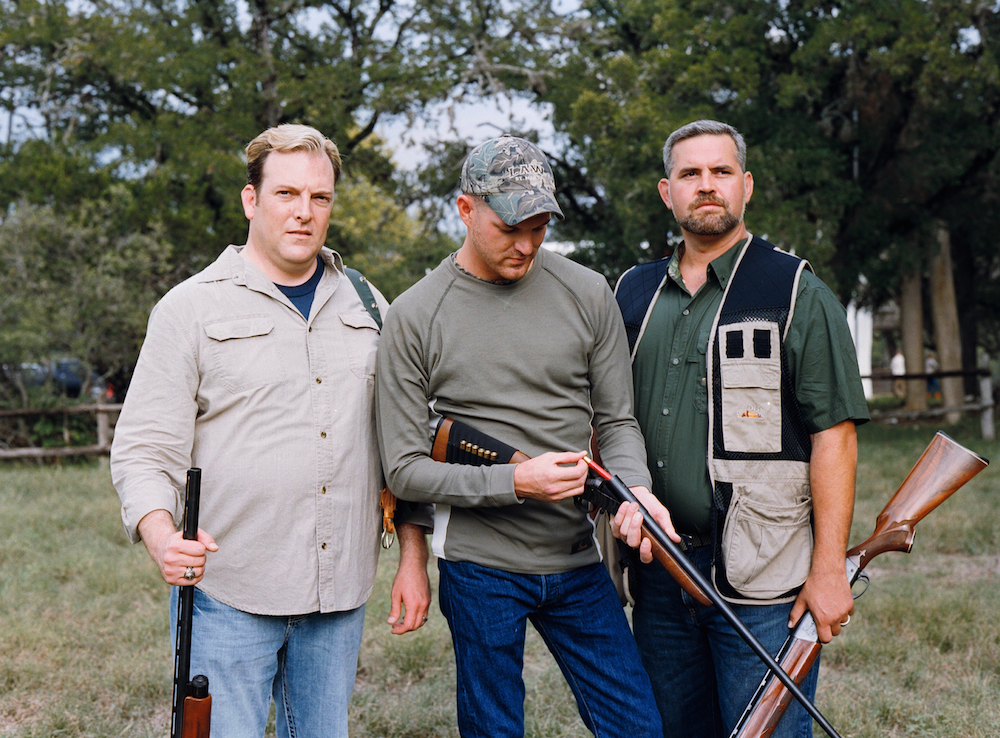 Nichols, center, from the Out In SA Winter 2015 photo shoot. Photo by Bryan Rindfuss. 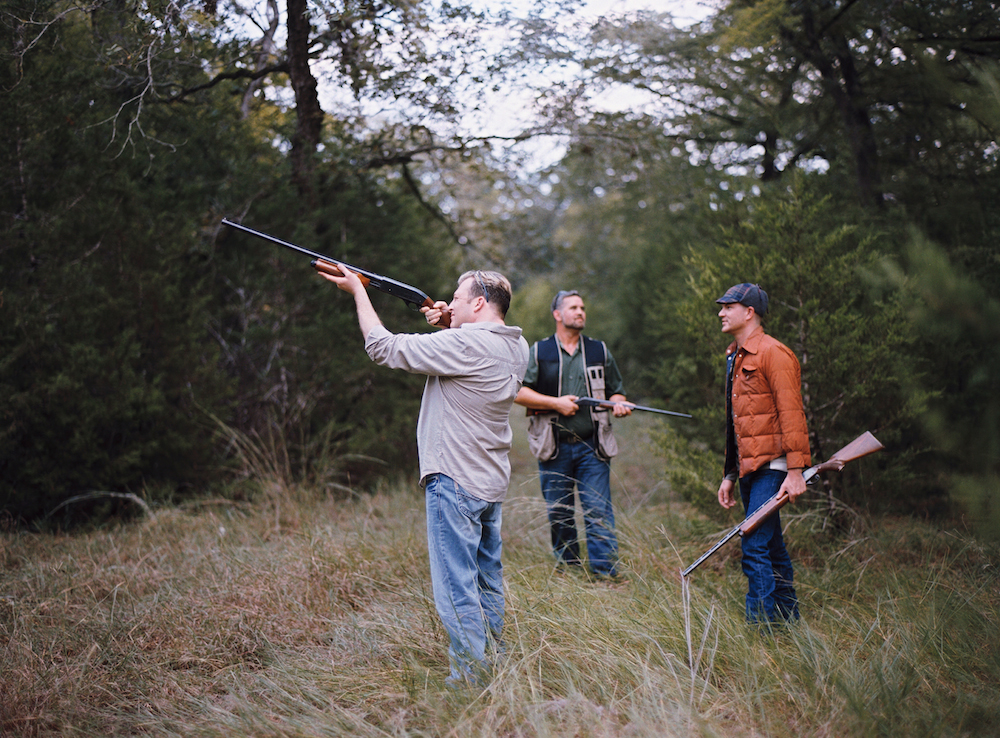 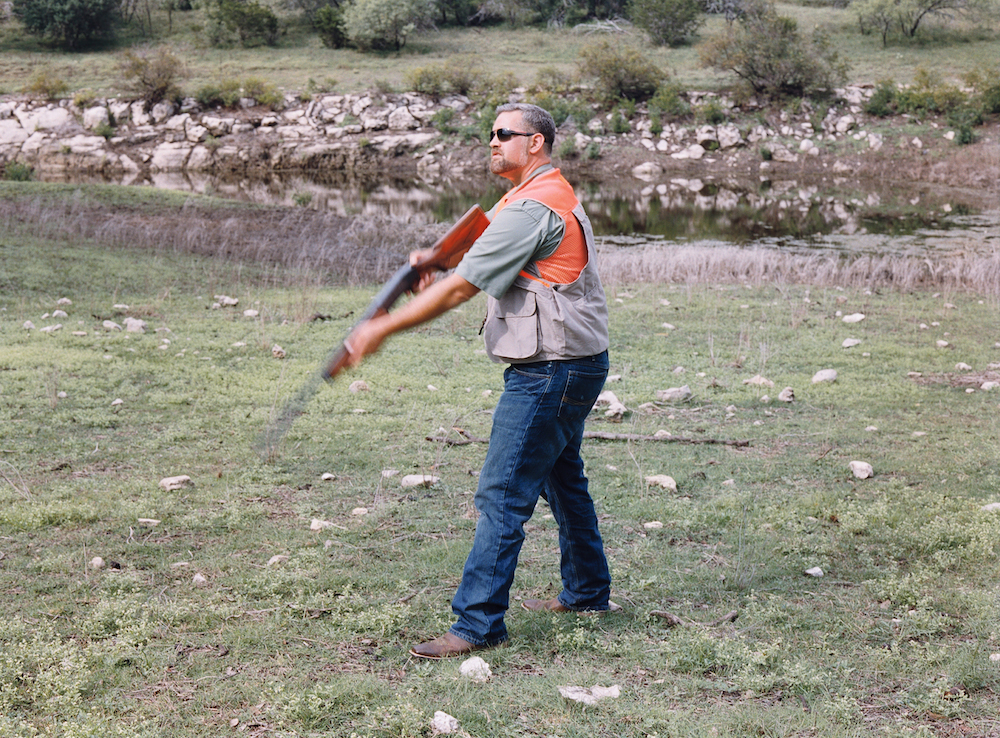 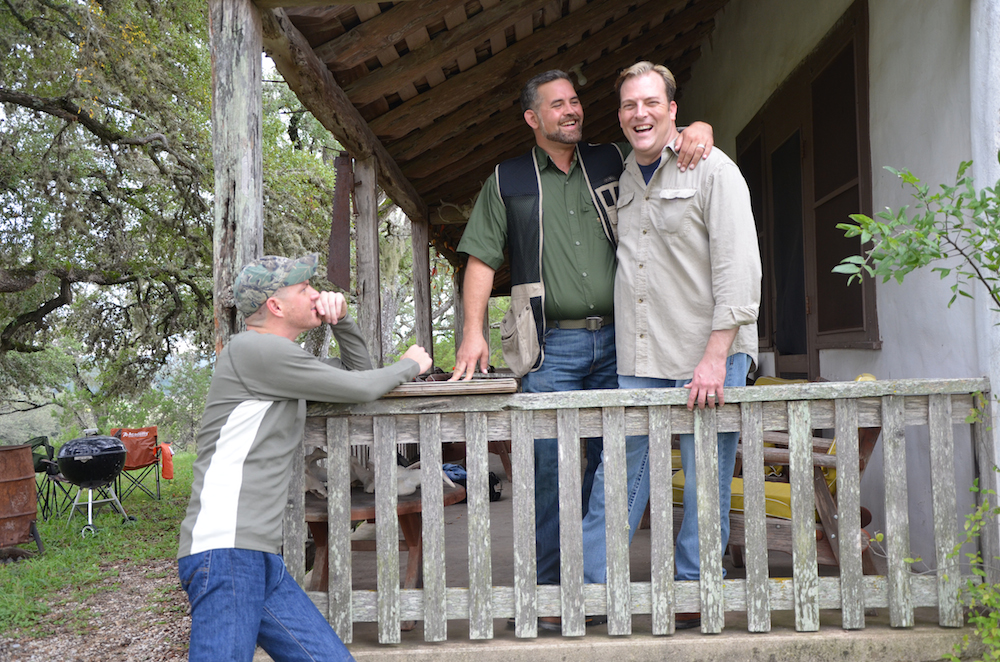 Nichols learned to hunt with his grandmother, the person he’s “closest to in the world,” when he was just 6 or 7. His family is 6th-generation Texan, from Karnes and Medina, and hunting is a proud tradition for them, but if it weren’t for that well-rounded lady, now 78, he might never have learned.

“I was not the most masculine little boy,” he said. “I guess it was largely assumed I wasn’t interested, but she said, nope, you’re going.”

“As recently as just a few years ago, she gathered the grandkids around and showed them how to clean a dove.”

“At it’s core, it’s a skill that provides independence … and a skill that’s going by the wayside.”

“It’s not just the hours sitting in a box … it’s the whole process. Going out with friends the night before and doing the setup … being tired, going back and sleeping, and getting up the next morning.”

“It is really an intimate connection with nature.”

Van Eman learned to hunt from his father, “back before I can remember.” “It was something we shared that was unique to us that I didn’t share with my mother, and he was the teacher.” He does vividly remember getting his first gun for Christmas, a 7mm-08, when he was 10 or 11. “Someone thought I was responsible enough to have my own.”

He shares the skill and passion with his husband, Jeremiah, and they hope to pass the tradition on to their children.

“A lot of it is being outdoors, the camaraderie. You have to trust the people you’re with when you go hunting … these aren’t casual friends.”

“I think there’s a thrill in actually going out and hunting …You’re trying to find an animal that really wants to get away from you.”

“Quail nest on the ground. You have to go find the coveys. You have to walk in a purposeful line … They take off and you have to react quickly.”

Jeremiah Birmingham, educator
Favorite game: Dove and quail
Favorite dish: Birds barbecued on the grill with a jalapeño in the middle (but venison burgers are really good, too)

Birmingham also learned to hunt with his father, beginning around age 6. “As we became older it became more stewardship of the land. What we take off the land is for our family; you take care of the environment.” A

He looks forward to teaching his and Van Eman’s son when he’s old enough. “Both of his grandfathers taught his fathers how to hunt … he already has his hunter-orange jacket.”

Birmingham often donates extra venison to the food bank after it’s processed. “The majority of time, people who hunt are very selective, and only harvest animals they’re going to use.”

“It’s a really communal, fraternal kind of time … walking around 100 acres, trying to flush quail, talking about things that are not living-room appropriate.”

“It’s not always a goal at the end, getting an animal–it’s the planning, the bonding.”

“Then you cook together, and it’s almost tribal, and you share what you got–it doesn’t matter if you got one or five or 10.”

Williams’s first hunting experience as a child was a false start. “Whatever the appropriate age is in the south, I was given a rifle.” “I was supposed to shoot squirrels. I had a little .22 rifle, it actually had a squirrel carved on the butt.” But when it came time to pull the trigger, he couldn’t do it. “I leaned the rifle up against the nearest tree and walked home.” But many years later, he was reintroduced to hunting–and culling, the practice of thinning herds to prevent disease and malnutrition–by a friend with a family ranch.

“Actually seeing the deer shot, that’s hard. But I learned you eat what you kill. That very night we had the backstrap. … t was like the best filet mignon you ever had in the finest restaurant.”

“If I were an animal, I think I’d much rather be killed in the natural landscape than in a factory.”

“I love riding around in trucks on ranches. … it’s one of my absolute favorite things to do on planet earth. I just intently watch the landscape. It’s a luxury to be able to do that.”

“It’s a communal thing–you all play a role … and then having a communal meal with the deer.”

“You get to know people really, really well. There’s a certain intimacy to it that’s quite remarkable.”

The idea of mestizaje has long permeated the pages of the queer Xicano literary canon. We exist in many places...