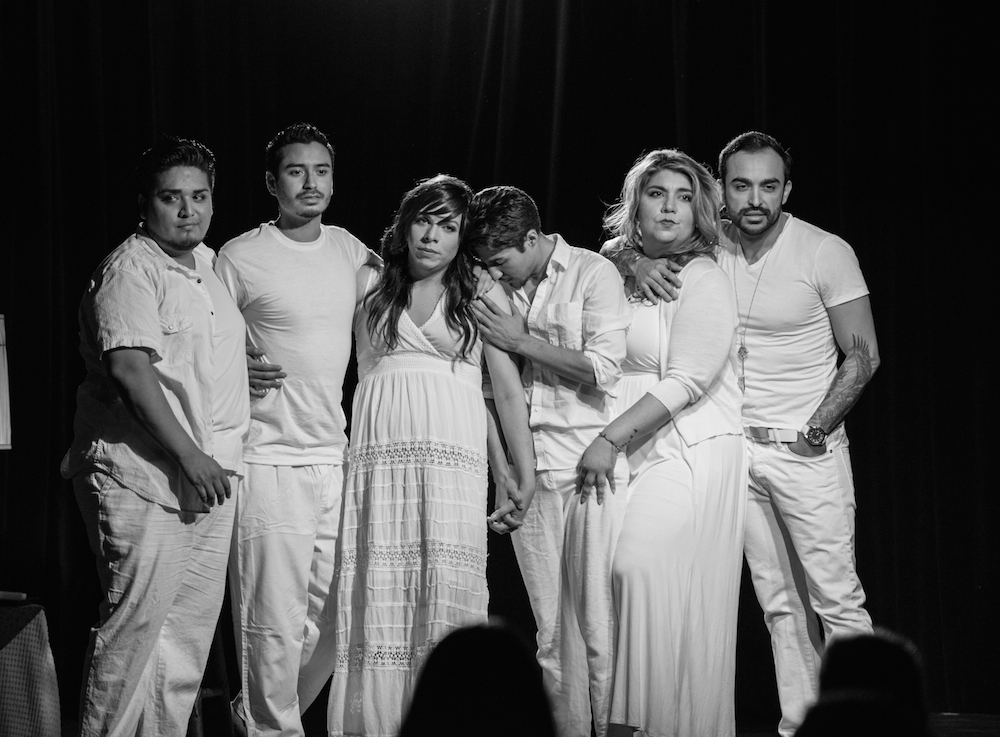 The cast of Jotos del Barrio at the 2014 revival at the Esperanza Peace and Justice Center. Photo by Lauryn Farris.

The idea of mestizaje has long permeated the pages of the queer Xicano literary canon. We exist in many places at once, all of our identities speaking to each other in symphony. We should not have to defend the multifaceted elements of our existence–instead, we should celebrate the parts of ourselves that make us different, this “otherness” that signifies who we are, this “otherness” that actually makes us all the same. The idea was most notably curated by queer lesbiana and intellectual Gloria Anzaldúa and continues to lay roots in the artistic landscape of queer literature. Still, there is an inner conflict that preempts this journey toward consciousness, toward the acceptance of one’s own otherness. “One can become a public person while still remaining a private person,” Richard Rodriguez wrote in his 1982 memoir Hunger of Memory. “At the very same time we can be both! There need be no tension between the self in the crowd and the self apart from the crowd! Who would not want to believe such an idea?” It is this dichotomy that Jesús Alonzo so artfully captures in his recently published play, Jotos del Barrio.

Originally written in 1995 as an angry response to a media-studies course, Jotos del Barrio has–much like the Latino community embedded in its pages–lived a life completely its own. “When I first wrote the play, I did not envision it going beyond my professor’s desk,” Alonzo says, modestly. Never amenable to the benefits of mass marketing, Jotos was destined to weave in and out of the hands and lives of those who were meant to be a part of it in some organic or spiritual way. Nearly 20 years later, the play has found a home in print by way of Kórima Press, an independent publisher based out of San Francisco.

Jotos is comprised of 11 scenes that examine the lives of queer Xicano youth, recounting in sometimes heartbreaking detail the inner workings of the characters’ hearts and minds–including those memories that cannot be forgotten. The two-act play opens with an immediate reminder of the secrecy that is implicit in so many queer lives: “Don’t you know how dangerous it is to be seen here, at this play?” The play is also punctuated by a series of infomercials for “the one and only video that will turn you into a fast tongued, quick thinking, all-knowing jota conscientizada: Straight on Queers!” Both hilarious and necessary for comic relief, the vignettes serve to counterbalance the weight of scenes like “El pinche rapist” and “In the Shadow of Gayness,” but may also be an ironic reminder that the ability to thoughtfully articulate one’s identity is not a skill that simultaneously arrives with the awareness of being queer.

While Straight on Queers provides the answers we often struggle to recall in the face of ignorant questions, the play as a whole provides an informed response to the questions that society as a whole is still struggling to ask: How can you be gay if you’re masculine? “And because I am not effeminate/I cannot be a joto?” Why don’t you just tell your family you’re gay? “My truth/Was too dangerous/And I was too weak.” Don’t you want to be like everyone else? “I’m perfectly happy with who I am.” And then there is the answer for those times when patience has run out: “Pues chinga tu madre, cabrón!” With these characters–some further along on their journey toward self-acceptance than others–we visit the past and reflect on the possibilities for the future. From the play’s early overtones of shame and guilt, we collectively arrive closer still toward the acceptance of self-love, as one of the players boldly proclaims: “I will carry my bags/Through every door I enter/Conceal my identity no more/And you will know when I’ve arrived/Because I will celebrate my existence.”

One cannot help but draw parallels between the play that was written by a 19-year-old Alonzo and the identity of the queer community about which he writes. Both the work and its subject are shape-shifters, navigating in and out of the skins they inhabit on their ever-evolving journey toward consciousness. Addressing the audience directly, one character speaks to living in this middle space: “I am/your secretive son/who lives in a world/he/holds between two fingers/unveiled/molding and remolding/shaping and reshaping/eternally frustrated … ” The play continues to edit itself in both print and production, speaking to the non-static nature of the queer community it serves in theory and in execution. “My hope is that the play continues to change with every incarnation. It has to if it is to continue reflecting our lives, struggles, and victories,” adds Alonzo, who describes his original work as “very simple and mostly poetry.” But like the characters of Jotos del Barrio, the newly published version of the play has found its voice and now proudly inhabits a much larger space–a space fraught with multilayered characters delivering elegant monologues, the kind of poetry that sings itself off the page, and stories of the human battles between guilt and liberation, truth and secrets, past and future, fear and bravery.

First shelter for homeless LGBT youth to open in S.A.

The first non-profit in San Antonio to provide overnight shelter exclusively to homeless LGBT youth will open on November 18....